This has come up again since RACV are resisting the removal of a lane of traffic on Princes Bridge to give cyclists more than the part of a busy footpath and the mere sliver of roadspace they have now:

What alternatives are there to RACV road service? Because if you disagree with the RACV’s stance on transport issues, why help fund their lobbying? 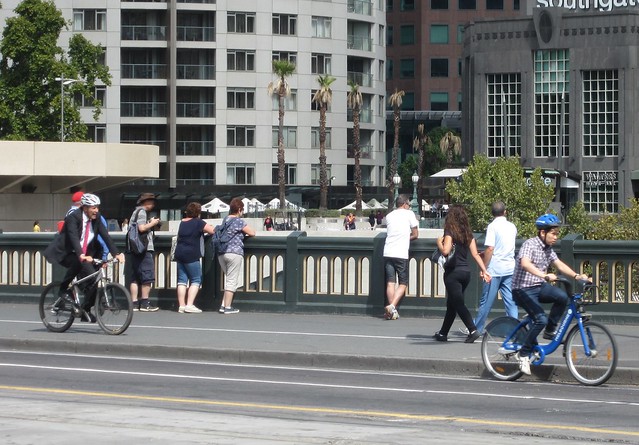 With thanks to Brad McCluskey, combined with a previous list of mine, here are some contenders (quoting their basic plans, which I suspect is what many would want as a basic safety-net), and the annual fee:

Also some companies offer breakdown assistance on a per-job basis, with no joining fee. It could be cheaper if you very rarely need to call, but it could be expensive if you use them regularly:

Are there any others?

I’ve been signed up to 24/7 Road Services now for some years, but have never had to actually call them.

RACV being the biggest, probably have the most assistance vans, but also might be busier and slower at peak times to respond. I have seen a lot of Allianz vans around recently. Perhaps they just have a more eye-catching design than most. Have people tried some of these alternatives?

Always check the fine print of course. Some companies won’t sign you up to an annual plan if your car is too old. Some plans limit the number of callouts you can make and/or have different tiers of service plan. And some have limited or no coverage outside metropolitan Melbourne.

A timely post.
Our RACV roadside assist recently lapsed. Apparently their system can’t cope with our change off address, although my insurance bill still arrived ;)
I didn’t realise there was so many options. Why did I think RACV was still the only choice?

Funny. I saw an Allianz van in a neighbour’s driveway yesterday. So they really do exist !
Before I make a change from RACV I’d need testimonials from motorists who used another provider and got good service (in metro and rural areas).
But I do object paying for lobbying.

I was with this mob when living in the UK a few years ago:
https://www.eta.co.uk/

Was very happy with both their service and their advocacy. Wish there was an equivalent here.

Thanks Daniel, this one got me thinking. I’ve been an RACV member for years but I’m a daily cycle commuter and that’s much more important to me that any road lobbying. Bicycle network membership is due and I think you’ve just pointed out where I can get some extra cash to cover the cost. Time to kill two birds with one stone; more cycle lobbying and less car lobbying.

I have Allianz as part of my car insurance and had to request a tow truck in the last six months. It took about 90 minutes to get to me but I don’t know if that’s usual for a tow truck in evening peak. It probably is. I haven’t had to get their service vans to come to me but there’s little point in them nowadays because most things that can go wrong an immobilise a modern car can’t be fixed on the side of the road, so a tow truck is needed. But if I need a jump-start, I ask another motorist. And I change my own flat tyres on the rare occasion that they occur.

I’ve never subscribed to a roadside service (either here or in the US). I only drive about once or twice per week and my car is fairly new (2007) and it is in excellent condition. I also didn’t know that there are alternatives to RACV so I’m glad you posted about them. I have Allianz insurance so perhaps I’m covered for some services already? I’ll have to look at my policy or ask them about this.

I’m an RACV member and a Bicycle Network member – thanks for pointing out the contradiction!

“Extensive studies undertaken during the past year indicated that the two traffic lanes were able to be removed with minimal impact on car volumes because the capacity constraint was not lanes, but traffic lights and intersections in upstream CBD streets.

Even had there been disruption of car traffic, the project would still have proceeded because the benefits to the other road users far outweighed the small impact on drivers.

The changes are of major symbolic importance as it re-establishes the forgotten principle that our road network is for moving people and freight, not cars.”

I will be looking at one of the alternatives when our RACV membership comes up for renewal.

The RACVs stance on this matter really reinforced my opinion that they should never have been put in charge of the Melbourne Bike Share program. They may have a few positive words for cycling on their website, but as an organisation they clearly do not want cycling to increase in mode share at the expense of the automobile.

Allianz only donates to the Coalition parties, if we’re going to take a holistic view of a company’s political activity into consideration: http://periodicdisclosures.aec.gov.au/Donor.aspx?SubmissionID=49&ClientID=4528

The RACV’s support of the Melbourne bike scheme is fully consistent with their primary goal of supporting automobile users: more road users riding bikes instead of driving means more room on the roads for automobile users.

I said in my earlier comment that I’d be looking at the alternatives when our RACV membership came up for renewal. Three days later our RACV renewal letter arrived – so a very timely post.

Got to wonder about some of these alternative providers though. They don’t appear very professional.

For example, look at the bottom of each page of AAC e.g. http://www.aac.com.au/transferRemainingMonths.php “Replica handbags UK” It’s like they’re advertising fake luxury goods which looks very dodgy! All I can guess is very unsophisticated link farming.

24/7 has emblazoned in its banner at the top of every page “”Out of Feul”. You’d expect better from a company that specialises in car service…!

A warning about Allianz’s $79 roadside assistance: when I rang up to buy it today I was told that it was only available at that price if I held an Allianz car insurance product, otherwise the price was $99.

Daniel, for the benefit of future readers of your post you may wish to update it with this information.

Currently looking to move from RACV due to road lobbying but struggling to find another option – extra info re some of your suggestions above:

Scoopon is currently offering a deal on the Allianz assist at $49 instead of the normal $79:

@Shell
It appears that 24/7 may have changed their policy, I sinned my 18 year old car up with them in April and had no problems. I was going to go with Ultratune but went with 24/7 because of the 16 year restriction. It will be interesting to see what happens when it comes time for me to renew.

I am looking at getting the Allianz Roadside assist. However, their PDS specifies that they will dispatch a service provider up to 20km in metro areas and 50km in regional and remote areas.
I live in a remote area, so where do I find a list of where their service providers are?

As a RACV approved repairer my business incurs a fee of $ 700.00 quarterly paid to RACV. This allows me to be a so called privilege RAVC service centre.
RACV members that are referred to me are charged a additional $75.00 dollars on top of the repair costs of the vehicle. RACV road side assist is allowed 10 mins to sort out problem then too advise referral. As to so called member discounts bullshit !!!!

Member racv gold.seems in wonthaggi 45 min wait.inverloch one hour to one min 15 mins.twelve min drive to inverloch.we are not that important.in melb i havent waited that long.service has slipped with racv.jumpstart yes. No attempt to see if battery was charging until i asked him to check after next day breakdown.

Allianz are now donating to Labor as well.
http://periodicdisclosures.aec.gov.au/Donor.aspx?SubmissionID=51&ClientID=4528

24/7 Road Services currently have a deal : $89 for two years for the basic version without hotel accommodation in the event of a breakdown. Cars need to be under 10 years old.

We changed to allianz comprehensive insurance after a bad run with Aami, got a better deal, and got roadside assist thrown in. Have used it twice – once for tow – 1 hour wait but no problems. Second time was a dead battery a couple of months ago. We were grossly overcharged ( $285 for a $160 battery); only realising after paying and then checking battery specs. Still working through the issue. It appears they use sub contractors in some areas and seems we got a dodgy one. It has taken them way too long to sort it.

Thanks all for your contribution, great as I am looking to buy an insurance, I have been an RACV member for many years but my membership lapsed last month as I was away overseas. When I rang to renew I was told I will have to pay to join and so decided to check if there are other roadside assistance around Melbourne. Any one who can suggest a good one???

Hi Daniel,
I dropped my membership and decided to use the ” on-demand” independents if the need ever arrived, as I never used my membership, anyhow I run into problems earlier this year and used RTA Batteries and Roadside Assistance, which got to my location in Western Sydney in under 30 mins and tested my battery and charging system – anyway I just needed a jump start which cost $50 for everything – I was please with that. I was talking to the technician and he said they are operating throughout Sydney, Brisbane, Gold Coast, Adelaide and expanding into Melbourne. Might be one for your list of ” on-demand” providers.
You can find them here : http://www.rtabatteries.com.au

@Toby, that’s great – thanks! I can’t currently see any mention of Melbourne, but for people like me who rarely have to call roadside assistance (I think it’s been at least 7 years for me), it’d be worth looking at.