The Phase 2 Report from the High Speed Rail study was released last week — predicting that although HSR would cover its recurrent (running/maintenance) costs, it’d first take some $114 billion and 45 years to build it.

As I’ve said before, I think a 3-ish hour trip from Melbourne to Sydney would be time-competitive with flying. 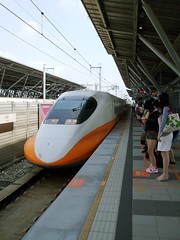 $114 billion is obviously an incredible cost, and taking decades to build it is a totally unambitious timeframe. I’m sure if you outsourced it to those who have built such lines elsewhere, they could get it running much more quickly and cheaply. Or if they got tough on the airlines and proclaimed a forced heavy future reduction in emissions, and particularly if oil prices skyrocket and a second Sydney airport is put on hold, they could coax Qantas and Virgin into the railways business.

(It’s interesting that much of the debate since the report was released has ignored emissions issues, and focussed on the benefits to existing rail passengers, not those currently travelling by air.)

But even if you assume it could be built quicker and cheaper, the question is: should one heed the calls of the optimists and start building it now? Or follow the cynics who say it’s all too expensive, that we don’t have the population, and we should forget it?

I’m not sure. Fact is, across the country, there are probably a lot more important infrastructure projects that need building first. That money (even if you assumed it could be built for half that cost) could solve a lot of other problems.

And realistically, the political and economic climate means there’s no hope of it being built right now.

But… as this piece in The Conversation says, they should definitely go ahead and identify and reserve the corridor — just like the roads people do all the time.

All that said, it seems prudent to plan and protect a corridor. It’s not overly expensive to work out a detailed alignment and preserve it from incompatible land development. This does little harm and ensures we can move forward if and when circumstances change and/or the time is right.

This is a must. Not doing so — even if actual construction work isn’t to start in the foreseeable future — could make it impossible for it to ever happen later.

13 replies on “#HighSpeedRail may not happen anytime soon, but it’s critical that the corridor be reserved”

You make some good points. It’s a lot of money – could be spent on lots of other things (tax cuts during an election campaign?).
A reservation seems a good idea

I think the critics are ignoring the fact that Australia’s population is forecast to be 40-50 million by 2050.

If you amortise the cost over the 45 years, I wonder whether it’s actually, in the scheme of things, even that expensive. (I mean, obviously it’s a fair bit of money, but it’s not like $114b needs to be found right now.)

Provided you are prepared to fully compensate the land owners for the restriction you are imposing upon them.

I have not read the report but I have heard that a very large slice of the cost is involved in bringing the HSL right into the Sydney city central station. It seems to me that people would be willing to travel either by car or PT to a station for the HSL in Parramatta as they would to an airport a little out of town. Doing that and also buildig a new station somewhere between Melbourne city and Tullamarine (say next to the Western Ring Road near the Hume Highway would reduce the costs drastically and also lower the time taken to build it.
I would say spend some money on necessary nation building infrastructure, and do it now.
BTW I live in WA and would personally not benefit but Australia needs it.

Gerrit – I was thinking a similar thing, but the report is pretty thorough and examines those options you mentioned. The terminus needs to be in heavily used area with very good public transport and any such site (like Parramatta) still involves tunneling. Whilst it would be a shorter length of tunnel, it would only be $1-1.5 billion less than going directly to Central.

@enno – for much of the corridor, it’s not much of a restriction. It happens for roads all the time and people aren’t directly compensated – only when an actual acquisition is made. It’s part of living in a society. All land has restrictions – you can’t build a tower in the 1/4 suburban block – should you be compensated for that (even if the planning restrictions came in after you bought?)
Regulations change – it’s a fact of life, and a risk, however slight, we are always subject to.

People are more suspicous than they used to be. In the old days, the government was not run by people like the one recently exposed in Sydney. Except in Melbourne in the 1890’s, when it was worse.

A lot of the arguments before and against various HST station sites, are actually quite lame, inconsistent, and not properly explained. Some of their alternatives, like spending an extra billion to avoid a low-grade insignificant heritage building, don’t really stand up to scrutiny.

They blithely assume no parking is required at stations – which does not really stand up to scrutiny either. And there is no consideration of the rental car industry, for which there is a big demand by incoming passengers at airports everywhere. They assume that several thousand people per hour will turn up at Central station in taxis, and then assume that the existing taxi space there will be sufficient… it doesn’t add up.

In my experience, the reason why so many good transport ideas never see the light of day is down to only three things: political fear, maintaining vested interests, rampant NIMBYism.

I worked with Strategic Transport and Land Use Planning engineers for the last 7 years whose principal responsibility was identifying, testing the feasibility and preserving the types of corridors proposed for HSR.

They took their responsibilities very seriously and went to great lengths to ensure proper consideration of land use, as many of the issues we see today aren’t actually ‘transport’ problems but a consequence of poor or inappropriate land use planning.

They considered population and demographic projections many decades into the future, and that their decisions must withstand the rigours of public scrutiny, especially when it came to defending the economic feasibility and social impacts of their proposals.

While I worked closely with the technical staff, I also spent an inordinate amount of time assuring Joe Public that, yes, the engineers care very much about what they’re doing and that , no, they are not out to wreck your ‘lifestyles’.

So in that context, the biggest problems we encountered happened trying to finalise the preservation of corridors was when the politicians who asked for advice or briefings on what was being planned didn’t like the sounds of what was being planned (because apparently it’s all about the ‘good news story’, not about actually doing something. I know, who’da thunkit.)

At the end of each briefing there was almost always a cascade of “too expensive/too far off/too much community impact.” Which was just code for “No, no: I don’t need you to update me about what’s actually happening: I need you to tell me something that will make people vote for me.” Sorry to disappoint you Minister, but any engineer worth their professional reputation will never tell you a technical solution works when it doesn’t. Is it any wonder why nothing gets done.

The best Ministerial response I ever heard to a $160m proposal that would have provided major safety and efficiency improvements at a known blackspot was “$170m for 20 years service eh? Hmmm… but what do I get for $60m?” For $60m you get a shiny new interchange that still doesn’t work and falls over in 2 years, Minister * facepalm *

The second reason it’s all so hard is almost always trying to run heavy infrastructure through even the most lightly populated residential areas. Another consequence of poor land use planning. While it may not be an issue for HSR right now, it most certainly will be in the unlikely event it ever gets off the ground.

A lot is being done behind the scenes to reduce car dependency and ensure that corridors are preserved to facilitate the provision of major strategic transport infrastructure. Additionally, lots is being done to help move traffic more efficiently, and not just by building more roads, either. But that’s usually not what makes the news.

All this seemingly endless debate about HSR shows is that being seen to be thinking about doing something REALLY REALLY BIG w00t! is much, much better than actually doing it.

The prospect of HSR in Australia has quite a lot to do with the total absence of political will to make important decisions and the far-sightedness to delivery what’s really needed for the long term. Because if it was such an amazing idea (which it is) that Australia sorely needed (which it does) it should happen despite the cost, not because of it.

Well said Davide! And the scary thing is that political approach of only approving things that make the minister look good invades many more portfolios than just transport.

I love your last paragraph particularly.

Yep, politicians don’t like to play the long game, yet the long game is ultimately the most beneficial to society. It’s a lack of imagination, courage and maybe even intelligence. The “right” decision will not always be the most popular until it had had time to payback the efforts which go into it. and the politician is long gone by that time. Why set up glory for your opposition or even future members of your own party?

“The prospect of HSR in Australia has quite a lot to do with the total absence of political will to make important decisions and the far-sightedness to delivery what’s really needed for the long term. Because if it was such an amazing idea (which it is) that Australia sorely needed (which it does) it should happen despite the cost, not because of it.”

yeah, what he said.

@enno. “In the old days, the government was not run by people like the one recently exposed in Sydney.” Really? What about the Askin government in NSW, or the Bjelke-Peterson government in Queensland? To name but two of the more outstandingly bad examples. I would argue the difference now is that now we have the ICAC (in NSW) with a remit to expose corruption – at least when let loose when the government changes…

If you look at what Askin actually did, it wasn’t much.