It’s inevitable that the passing of Margaret Thatcher would provoke mixed responses. Such polarising figures often do.

She may have been a trailblazer for women in power in the western world, but I don’t remember her time as Prime Minister fondly. I was young and perhaps it was a naive viewpoint, but I remember the early-80s under her and Reagan as a time of real fear from nuclear war.

The real situation probably wasn’t that fraught (people cleverer than me could theorise how tough-talking from the west helped bring down the iron curtain), but some have pointed out that Thatcher was against German reunification and did not support sanctions for South Africa against Apartheid.

In terms of lasting legacies, the one that sticks out for me was that her privatisation of numerous nationalised industries.

Thatcher always resisted rail privatisation and was said to have told Transport Secretary Nicholas Ridley “Railway privatisation will be the Waterloo of this government. Please never mention the railways to me again.” Shortly before her resignation, she accepted the arguments for privatising British Rail, which her successor John Major implemented in 1994. The Economist later considered the move to have been “a disaster”.

Disaster indeed. My mother recounted how, on a visit to Britain after it happened, at a railway station a staff member couldn’t (or wouldn’t) give her any information about a different train company that also happened to serve that station. 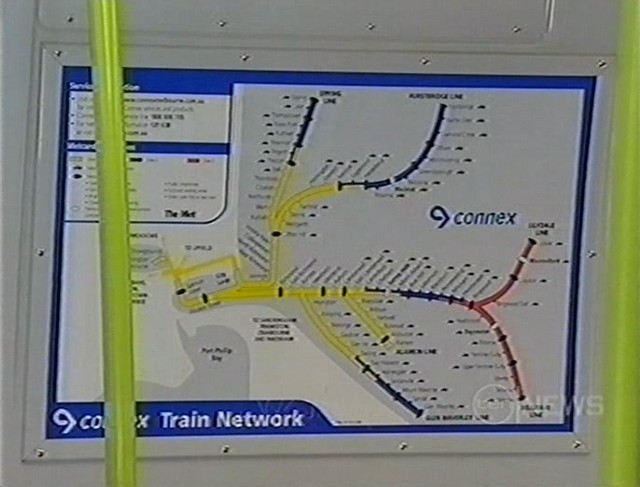 In transport and in other sectors, this mess was later replicated here in Victoria — perfectly illustrated by this on-board train map from the early Connex days. It not only excludes the half of the network that Connex didn’t run, it also excludes the underground Loop stations where Connex did run, because these stations were managed by the other operator.

Later reforms, both here and in the UK, fixed many of the issues around privatisation.

Some industries, including public transport, can’t rely on companies that only compete, and never co-operate. PT operators need to work together to form a network — because their real competitor is the private car.

Anyway, I’m rambling a bit off my original topic. But that’s blogging, right?

6 replies on “Thatcher and her privatisation legacy”

Yes, I think many people this morning will forget the not-so-good aspects of Thatcher’s reign. Or, as the Young Ones use to put it: Thatcher’s bloody Britain!

And of course there was also bus deregulation.

Thatcher and Reagan ushered in an era of selfishness and scorched-earth capitalism that is still with us.

So I tune into Jon Stewart, and there is David Stockman. How bizarre is that ?

A decade or so ago my father would take me up from Geelong and show me around Melbourne. We’d often need to catch a train from one of the Bayside loop stations (i.e Melbourne Central.. before it got redeveloped) back to Spencer St (which was operated by that other company)

Easy, right? If you knew which way the loop lines ran.. (see http://www.railmaps.com.au/cityloop.htm )

The Bayside staff never did.. the response was usually ‘uhhh.. catch a tram’

@Matt, sadly that link is outdated… but this one still has current info! http://www.ptua.org.au/tips/loop/