Thank goodness that scientists aren’t warning of any kind of permanent warming of the climate that might prove, y’know, dangerous — otherwise a record-breaking run of hot days might be a tad alarming. 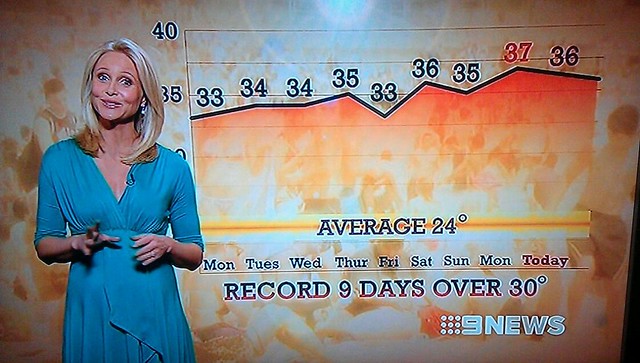 One shouldn’t jump to conclusions of course. As Jon Stewart quipped:

“Global warming is a total hoax. And I’ll tell you how I know. Because it’s cold, today, where I live. That’s jus’ science.”

…and the opposite applies.

I don’t know if this record run of hot days is some freak weather event caused by something else, or a demonstration of how climate change manifests itself. But at the very least this record being broken should be a warning of what’s likely to keep happening into the future as temperatures rise.

Yeah, a lot of records have been broken. Doesn’t look like “one off” events. Maybe there is an underlying cause (eg humans!)
PS What a dreadful shot of Livinia Nixon. Looks like she’s melting in the hot weather.

Only alarming if you forget how cold December and January were. I suspect the average summer temperature has been comparatively low.

Here is an article in the Conversation by climatologists at the Bureau of Meteorology stating that this summer had been the hottest on record.

I still remember the old ABC weather reader pouring a glass of water over himself during one hot spell at the old ABC studios in Elsternwick.

@Curveman – Even if December and January had been cold (I was away for most of them) don’t you think the fact that summer had seemingly been pushed back 2 months would be alarming?

My husband is a meteorologist and is always sadly shaking his head. If only we could make Andrew Bolt run a marathon on every day that is over thirty degrees and donate the money he makes from his blog to, um, solar panel installation and rain water tanks….?

@Curveman, I happened to be looking for some other weather stats, and found this, for Melbourne:

So both January and December this summer appear to have been warmer than average.