Many European countries put serious resources into their public transport systems and have networks that are the envy of the world, but don’t necessarily assume they are better than us in every single respect.

For instance, one might assume that German trains are never late — or at least that their punctuality is light years ahead of ours.

I discovered the other day that it is not so. 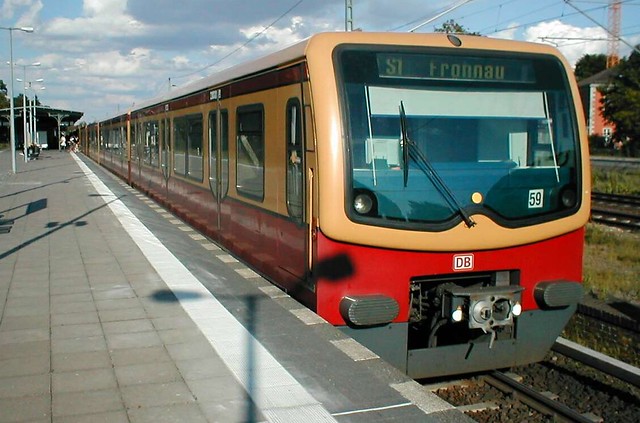 In the year under review, we significantly improved the punctuality of our trains. For punctuality up to five minutes, the average rate increased from 91.0 % in 2010 to 92.9 % in 2011. Both local and long-distance transport services posted higher annual rates in this category: long-distance transport achieved a rate of 80.0 % (previous year: 72.4 %) and the figure for local transport came in at 93.2 % (previous year: 91.5 %).

The long-distance figure isn’t directly comparable to V/Line, because V/Line uses a 5:59 or 10:59 threshold for “late” depending on the distance involved.

But the local figure (for instance S-Bahn suburban services) is comparable to Metro, as both DB and Metro use five minutes.

Metro’s punctuality figure for 2010 was 86.6%; for 2011 it was 87.0%; for 2012 it was 91.1%, so (at least recently, with the help of strategies such as skipping stations, which if done counter-peak has overall positive outcomes for passengers) Metro is in the ballpark with DB.

Bonus trivia: When I was a kid, I recall Lego trains such as 7740 came with various stickers for different operators, including Deutsche Bahn . I always used the Deutsche Bahn stickers, of course — their DB logo was perfect for me.

9 replies on “How punctual are our trains compared to German suburban trains?”

“Many European countries put serious resources into their public transport systems”
Maybe that’s why most European governments are broke! (Not Germany, admittedly).
Just a curiousity, does a cancelled train count as a service that ran late in the punctuality stats? Or is it ONLY counted in the cancelled service statistics?

Are you sure that the “Victorian Railways” stickers on the Lego weren’t actually for the Finnish State Railways, also known as VR?

I got fooled by that one as a kid.

@Mike, ahhhhhh! That explains a lot! (Like: why would they provide stickers for one Australian railway but not others?)

Are their “late” and “cancelled” stats calculated the same way? Certainly the British trains have a different system (for better or worse, I’m not sure).

Based on my VERY limited observations, my theory is that S-bahn services sometimes have some “slack” in them. In Berlin a year or so ago, trains would often spend a little extra time at the station so as not to depart before the displayed time. The lower you set the bar, the easier it is to jump over it! (Of course, Metro have in recent times taken the same approach with some of their timetables).

It doesn’t really matter if they run late when they’re so frequent. I remember doing a trip from Aachen to Cologne (about 50 minutes) and the trains were running about every 25 minutes. A comparable trip here is Melbourne to Ballarat and if we had that frequency of service (and speed), we wouldn’t even need a timetable.

When I was staying with friends in Dresden and was about to travel to Strasbourg by train (international 10 hour train trip), they checked the tram timetable from their flat to the station. Umm they said well one tram gets in 5 minutes before the train leaves but the one before that is 35 minutes early. You’d better catch the 5 minutes before one. I did and caught the train! Culture plays a big role in such things.

If you want to see punctual trains, go to Japan. They time their departures and arrivals TO THE SECOND. On a recent trip to Japan I rode on many trains. I like riding in the front because I am a geek and like to pretend I am a driver watching the track in front of me. I also looked at my GPS which had a very accurate clock display and the timetable in front of the driver. He closed the doors to the train to the VERY second shown on the timetable, drove off… then arrived at the next station, opening the doors to the VERY SECOND shown on the timetable. I was very impressed. A downside to this obsession with punctuality can be disastrous. A few years ago a train ran off the tracks and into an apartment building because it was going too fast for that section of track. The reason it was speeding was because the train was running 30 seconds late for the next station.

I also like West European trains. They are FAST(!!!), frequent and relatively cheap. On the other hand, trains to the eat of Hungary are slooooooooowwwwwwww, infrequent, but still very cheap. Coming back from Sofia (Bulgaria) to Budapest (Hungary) by train would have been so painfully slow that I abandoned my train ticket and bought a bus ride to Vienna (Austria) and a train back to Budapest from there. It was much quicker and more comfortable… but not cheaper.