As seen at google.co.uk on Wednesday. Very cool. 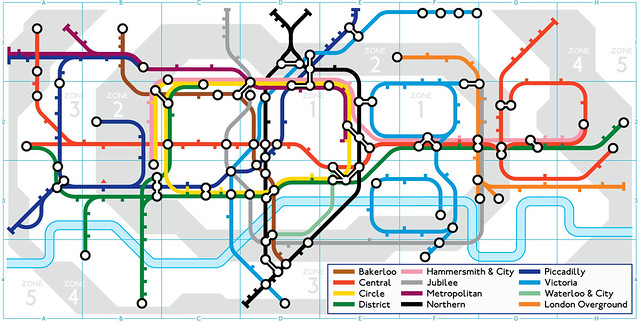 Note the subtle shading of fare zones, which reflects how they look on the official maps. 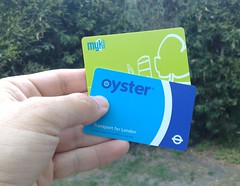 Perhaps it wouldn’t have saved much money to buy Oyster (Sydney is doing so, and it’s costing a similar amount to Myki), but I bet it would have saved time getting it running, and from what I’ve seen, we would have got faster response times on the readers.

That said, Brisbane implemented Oyster as “Go” card, and has had some issues. And Myki’s ambition was to cover most of Victoria with fare zones – I wonder if Oyster could have handled that. (V/Line buses run to Canberra and Adelaide. Adelaide was going to be zone 73.)

But of course now Myki has been cut in scope to go no further than the V/Line commuter belt — 13 zones in all. I suspect it could have handled it.

And the rumour is some in the bureaucracy are beginning to realise the way Myki was built was a mistake. Too late now.

13 replies on “Google celebrates 150 years of London Underground – and could we have bought Oyster?”

Daniel, I like your blog and tweets. But I have noted that recently you have become an apologist for myki. I agree it is too late and we have to live with it but that shouldn’t mean that there isn’t the need for a full review of how this was allowed to happen – with (shock horror) actual finger pointing and even sackings. If for no other reason, than contracts and decisions like myki should never be allowed to happen. It has cost an extraordinary amount of money and nobody is accountable.

“Beginning to realise”? Wow, there’s no fooling them is there!

I find it incredible that Peter Batchelor (the man who brought us not only Myki, but Smart Meters as well) is not being held accountable for his “contributions” to Victoria’s current economy. Of course, given the way VIctoria works, I don’t really expect he ever will have to justify his actions, despite it being well-known that he served as an executive at Kamco – who were awarded the Myki contract.

Indeed, there should be a review into how the Myki contracts were awarded. But calling Daniel an apologist for Myki (anonymously, unless your name is actually Anon) is just utterly ridiculous.

He is, however, in IT (like me), and so perhaps realises that things can be fixed, and that rolling out large systems is always complex. It doesn’t always have to be as expensive as Myki, or as badly managed, but it’s complex. And calls to replace it with something else, or to go back to Metcard are quite misguided.

As for “could Melbourne have bought Oyster” — most likely. Although the Mifare Classic cards are broken, so perhaps it wouldn’t have been great to buy it whole. Certainly custom designing pretty much every aspect was a bad idea; a lot of the existing systems could have contributed parts to what would become Myki.

The idea that Melbourne/Victoria was somehow a complex problem that couldn’t be solved by existing systems was either incorrect, or a sign that they’d overcomplicated the requirements.

I was in London last year. Oyster was OK, but the credit card top up on the machines often failed, because of the way most chip based credit cards are implimented in Australian issued cards (see http://www.australianfrequentflyer.com.au/community/general-credit-card-discussion/using-australian-chip-pin-card-27371.html ) . I remember having problems at Vauxhaull station, Covent Garden and a few others. So you’d have to find a counter to load credit on, which was very annoying.

Having used the Go card in Brisbane since its inception, I agree that it is not without its problems – but I doubt any electronic ticketing system is! I use it daily, an hour commute on the trains each way, as well as the usual one-off journies on buses or ferries (no trams any longer in Brisbane…)

But I have only had two instances of genuine errors – where the system screwed up as opposed to me forgetting to swipe on/swipe off (wax on/wax off….) or forgetting to top up (or not having money in the accunt when it tries to do the automatic top up…)

Overall I would give the Go card a pretty solid thumbs up. Not as cheap as the yearly rail pass (which gave, from memory, two months of the year free) although it is getting better with the 9 trips in a week and then its free….

Let me clarify further what I mean by Daniel being an apologist. I have noted/perceived that certain influential writers/bloggers are urging us to stop whingeing about myki.

However, I am concerned that “we” will send a message to the powers-that-be that we are pacified. That as soon as we get Short term tickets, we’ll be happy with myki.

I feel this is a dangerous position to adopt. If we go ‘soft’ on myki and ‘put up’ with its teething troubles we will reduce the political will to investigate and to have a public enquiry.

We should not signal to the government that we will put up with this kind of debacle (and I am Anon for a very good reason, and believe me the public doesn’t know the half of it).

We cannot vote anyone out over it since both parties have myki-blood on their hands (I’m a Green voter, incidentally).

I fear the Govt will think the public will swallow this, that they’ll learn to live with it, forget about the time and $$$ wasted and in 10-20 years time, more contracts will be signed in this manner.

People are getting paid very very good money to make these decisions, and they are not accountable.

Thanks Anon. You raise some good points, but you won’t be surprised that I reject that I am an apologist.

As you’ll have noted, some of my posts take the “we’re stuck with this; here’s how you can make it less painful for you” stance.

And a couple have made comparisons to Perth and Brisbane, and pointed out that all of them have their good and bad points.

What I really want people to do about Myki is to stop whinging about imagined problems and start making noise about the actual problems with it.

(I wrote about the former last week, and am preparing a post on the latter which will probably go out next week.)

There will always be dispute about the fundamental pricing paradigm for public transport – user pays pricing based on distance, or the allegedly more simple “zones” ? Multiple flag-falls for a single journey requiring two modes, or two modes of the same vehicle ? Or not ?

Those are the two fundamental issues, regardless of “smart” ticketing.

With myki, they chose to stick to the existing Melbourne system, which is neither particular unique nor particularly unmanageable, even if one doesn’t think it is “right”.

90% of the problems with myki are caused by ratshit design, ratshit implementation, and ratshit testing. The Melbourne network itself and its pricing system, have very little to do with myki’s key problems.

Canberra bought Perths smartcard system and named it MyWay. A very smooth introduction of COTS and very few problems with it. The only issue im aware of is that despite the promise of being able to use the data accrued from swipes on and off, the ACT Govt didnt buy that software module. The plan is to use the smart card not only to pay for public transport fares, but also to pay for other things such as parking machines (negating pockets of coins) in future.

The ACTION bus network in Canberra has major issues, but at least the smartcard ticketing has been rolled out well.

I looked on in horror as the Myki debacle occurred – like a car accident in slow motion. once the decision was made to persevere with it, then thats that. I dont think Daniel is an apologist, he is reporting on issues and sharing his views based on considerable experience in the field of both PT and IT.

Mykis major failing is that there are no daily or short term tickets (and that is a political decision, not a technical decision). You really want to make it easy for everyone to use PT. Many of the other issues are really teething issues common to other major IT rollouts

When it was decided to build the system from scratch, the scope was greater than now (and even before the current government axed many parts).

For example, does anyone else remember that myki was also intended for other micropayments?

Whether it was the right decision or not, it is worth considering where the bureaucracy wanted to go with myki when deciding to build from scratch.

I did appreciate how Transperth integrated the SmartRider into their paid parking areas, was handy not having to go for coins.