The Greens are traditionally strong on sustainable transport issues, but one of the local candidates for council raised my hackles with this comment:

Do we really need footpaths on both sides of the street, in every street in Tucker Ward? There are plenty of places without footpaths or footpaths just on one side. This would save a whole lot of concrete / resources and it looks much better.

Yes, we quite definitely need footpaths on both sides of the street.

There are few things that make pedestrians (and by definition, this includes all public transport users) feel like second class citizens more than a lack of footpaths. 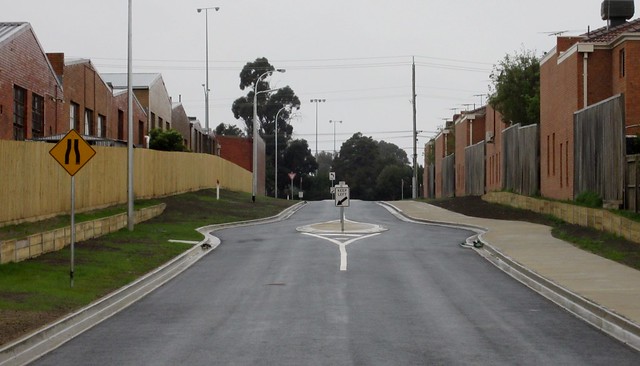 In many cases it forces people to cross roads where they wouldn’t otherwise be compelled to — in some cases twice, to avoid walking on the grass.

It’s doubly worse for those of limited mobility, including those with wheelchairs and other walking aids, and for parents with prams.

A side effect of no footpaths is blurred property boundaries, resulting in some overzealous home owners encroaching, resulting in public space effectively lost.

I spoke to Brett’s running mate Rose Read at Bentleigh station on Thursday morning. I think she has an understanding of why I disagree with Brett.

Brett has emphasised in an update overnight that his comment shouldn’t be taken out of context, and that’s fair enough. It’s not like he was stating a big policy position — he was just kicking an idea around. This is worth emphasising: I must give Brett credit for engaging with the community, throwing his thoughts out there and being willing to debate and discuss them, which is a lot more than some other candidates have done.

But I’d be frankly horrified if it was actually proposed to start removing any footpaths, or routinely build streets with only one.

Unlikely? One would hope so. But there is a live example, in Glen Eira, in this ward, right now:

In East Bentleigh, the area behind Valkstone Primary School is being re-developed. While most of the streets have footpaths on both sides, the access road (pictured above) east through to GESAC and East Boundary Road only has a path on the southern side, so if you’re from the north side of the access road, headed north on foot, you have to cross it twice… and this being the only road out in that direction, is likely to get reasonably busy at peak times when the estate is finished.

Sure, open space is a concern. But changes such as only providing one footpath will actively discourage walking and public transport, and encourage car use — that’s no solution at all in urban environments.

One possible way forward (not in the example above, but in quiet streets that don’t get through-traffic) might be what the Dutch call woonerfs — shared spaces, where the road is de-emphasised, allowing other users into the space, slowing down cars and making more effective use of space.

In Australian terms it’s (more or less) a Shared Zone, and there are examples such as this one on the Williamstown Rifle Range estate, developed about 15 years ago.

That said, I wonder if the average person understands how to use a Shared Zone — in particular that the law says that vehicles must give way to pedestrians.

But whatever the solution, the last thing we’d want around here is more streets missing footpaths.

14 replies on “As a pedestrian, I hate streets with only one footpath”

Yeah, you raise some good points Daniel. And they are not trivial, but affect our lives. Road safety is a big issue – cars, parked cars, bikes, pedestrians, people walking dogs, kids kicking the footy – all in the same space.
I’m a bit sceptical like you!

I don’t think the concept of shared zones in Australia has developed enough yet, it’s still a case of cars putting up with pedestrians crossing a shared zone, and not using it as a pedestrian route

A blog mate in the US was taking her son from home to the library, a short distance but she was being driven. Why didn’t she walk, I asked. She replied that the residential streets weren’t really designed for walking and that there weren’t any footpaths. Perhaps that it was Houston might be relevant but I don’t know

Do developers of new estates pay for the making of footpaths? If so, I can think of a couple of reasons why they would like less.

I live in an area where there are plenty of roads with only one footpath (or none, in many cases) and it’s incredibly frustrating, both as a pedestrian and a driver. There’s one road in particular where people walk down the road, in the same direction as the traffic, rather than using the footpath on the other side. This is mostly because the footpath is on the opposite side of the railway station, so people are reluctant to do the double crossing.

The lack of footpaths provides a lack of incentive to walk. They don’t even have to be ugly concrete things – a clear, gravelled path does a decent job, too.

Single footpath streets are quite common in a lot of suburban Canberra, mainly in the 70s/80s developed areas. A typical example would be something like this:

Also note in that link the lack of a naturestrip between the road and the one footpath, and the bus stop on the non-footpath side of the road, both not the greatest to a pedestrian/PT user.

Single-footpath streets are standard-issue in most new estates. The reason is that it is CHEAPER to build streets with only a single footpath. The road pavement is narrow for the same reason. Personally I’d rather have less paved area than more, but I’m annoyed that it’s only done as a cost saving rather than for aesthetic reasons.

I’m a big fan of the shared zone idea. Also a fan of “losing public space” as you put iit. The less space you have to walk over to get to interesting places, the more likely you are to walk. Instead of wasting public space by stretching it out and spreading it all over town in “nature strips” and “median”, concentrate it as parks that people can actually make use of.

Shared zones are also safer: the fewer points of conflict, the more likely a driver is to zone out, drive too fast or just not pay enough attention. Actual studies show the “intuitive” road safety plan of trying to reduce the posibility of mistakes just makes roads more dangerous.

Your top photo there doesn’t look like a normal street – none of the dwellings seem to be fronting onto it.

Although crossing the road is an issue, one over-wide footpath might be better for kids on bicycles and the mobility impaired, than two narrow ones. Particularly as there is no room for separation between the footpath and the vehicle carriageway.

A lot of the streets here don’t have footpaths at all.

Single footpaths suck big time. Here in Geneva they regularly create chaos due to roadworks, trams, buses, bikes and cars and when someone has a pram or is in a wheelchair or has a dog on a lead (moi) it leads to half of us walking on the road. Not good, not good at all.

Did you pick the Lakeside Place picture randomly, Daniel? I’m sure you remember who used to live in one of the houses in the picture :)

Where I’m staying in Toronto at the moment it is very common to have streets with footpaths down only one side, and it is frustrating as hell. I think I brought it up the other day on your comment about cars blocking the footpath, but when you combine that (cars blocking paths) and people with limited mobility the only solution is for people to travel on the roads. Not a good solution.

I’m much more inclined to shrink the width of roads (many of which in Australia are wider than they need be anyway) and keep footpaths.

@Alan, yes, agreed. And some Shared Zones are built to emphasise space for cars, and imply pedestrians don’t have right of way, eg http://goo.gl/maps/ko8j9

@Brian, certainly not random – I remember that street from visiting you!

ANd I hate gratuitous roundabouts like the one pictured. Their intent is to slow traffic down, which is fine, but it’s a headache to negotiate in vehicles that must use it (fire engines)

Interesting 2nd pic Daniel, of Lakeside Place. The road looks like its only 6 metres wide! No wonder people park on the nature strips that they are expected to mow.

This random and selective law-enforcement has to stop, ie fining people for parking on the nature strip of some roads. Enforce the law on all roads or none of roads.

A solution must be found.

They either need to start building 15m wide residential roads again, or build bus-stop type cuttings à la Hobsons Bay pde, Port Melbourne for parking legally, or put up signs on roads narrower than 10m saying “its ok to park on the nature strip here because the road is too narrow”, or put up signs saying its only ok to park on 1 side of the road, not both sides, so that Emergency Vehicles and Garbage Trucks can get through.