Just a few notes about the council elections, which officially take place on Saturday (though many areas are postal ballots, thus a lot of people have already voted).

A fascinating article in The Age the other day with former Glen Eira mayor Helen Whiteside saying she wonders why people bother trying to get onto the council. 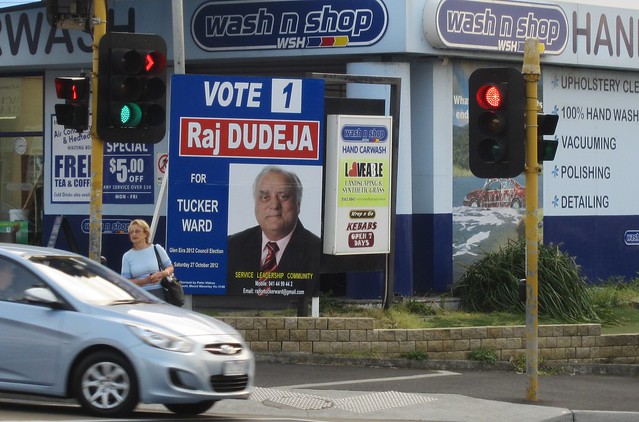 It doesn’t seem to have deterred the candidates, of course. One, Raj Dudeja, appears to have spent a small fortune putting up billboards right across Tucker ward. Yet curiously I haven’t seen him at all campaigning in person on Centre Road, whereas most of the others have put in an appearance either in the street on the weekend or at the railway station on weekday mornings. (He may well have been around and I simply haven’t run into him.)

The two Greens candidates have been particularly prominent, as have incumbents Oscar Lobo and Jamie Hyams. New independent Newton Gatoff has been out and about both on the street and in his decorated car, and I’ve also spotted Rodney Andonopoulos been driving around. I think I’ve spotted Phillip De’Ath (my kids jokingly call him Phillip Death) and a few others handing out their brochures and talking to constituents. Apparently it’s been similar in other wards.

Those I’ve asked how they think they’ll go say they really have no idea — the lack of polls makes it impossible to tell. They say it’s just a matter of getting their names out there (hence the use of posters, billboards, and signs on cars).

They seem to take the view that most people aren’t that concerned by how the council is run, and agree when I suggest that unless people see garbage piling up in the streets, they assume there’s no problem.

But some of the new candidates have highlighted issues, such as Councillor Penhalluriack’s controversial conflicts of interest, and the recent case of the council wanting to extract a fee from frisbee players in Caulfield Park. 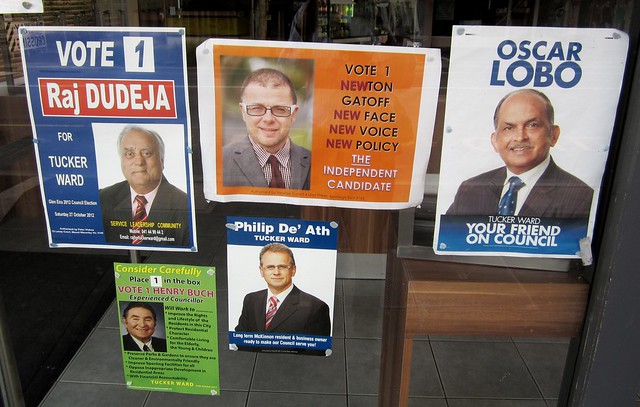 Brett Hedger, Greens Candidate has an interesting Facebook page that profiles other candidates (and tries via the How To Vote cards to identify the stooges and highlight those with undeclared party affiliations) and notes the shops that have apparently taken sides by only accepting one candidate’s poster.

It’ll be interesting to see how the vote goes. And given we’re one of the few council areas with attendance voting, I’m hoping that means there’ll be a sausage sizzle on polling day!

Daniel
excellent photos for your piece today.I noticed walking thru Bentleigh recently the large number of posters everywhere. In my municipality, Bayside, there’s no where near the advertising. I wonder if it’s because we are postal vote?
Will be interesting to see how the Greens go in Glen Eira and Bayside.

There hasn’t been much in the way of posters in Moonee Valley either and we are ‘going postal’. We have had a lot of letterbox drops though and a one or two of those even delivered by the candidate in question. We have ten candidates in our ward, so the ballot papers were quite long, although I would reckon that after putting my first 3 or four preferences, the rest just wouldn’t matter.

Curiously, in the adjacent ward to Daniel, we have had just three of the eight candidates give us any material at all. I know absolutely nothing about the other five candidates at all.

Since I’m not going to preference anyone I know nothing about, this effectively fixes my vote :-)