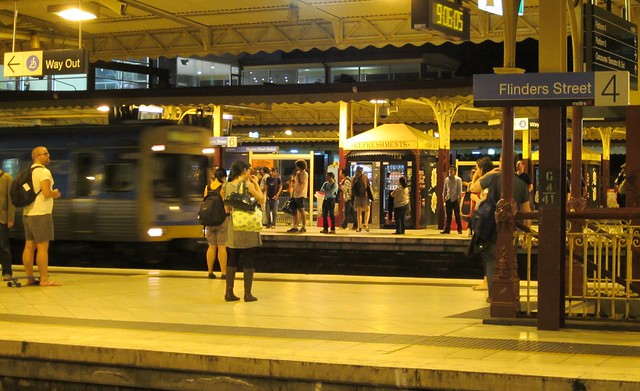 In November the Sunbury extension to the Metro network opens, which will increase services to Sunbury and Diggers Rest — every 12 minutes during peak, which is pretty good, and every 40 minutes outside peak and on weekends, which… isn’t (but is still an improvement).

As far as I can see, in the mornings (at least, off-peak) they’re scheduled to arrive at Sunbury station about 7 to 8 minutes before the train to the city departs.

In the afternoons, they’re scheduled to depart 7 to 8 minutes after the train arrives. This seems to include meeting trains up until the last bus departure at 8:35pm (meeting the 8:28pm train from the city). And it appears to be much the same story on weekends too.

Hopefully in both directions that timing is enough to ensure connections. I doubt they’d hold trains for late buses (given network impacts closer into the city), but the opposite might be true.

Unfortunately the connections in the counter-“peak” directions aren’t very good — I guess they are limited a bit by the train timetable and a lack of resources (as they evidently were at South Morang, where 20 minute trains are met by 20-40 minute buses).

But still, with 6 bus routes timed specifically to meet trains at Sunbury station, it’s a good example of pulse timetabling, something that will genuinely make a positive difference to locals, and hopefully an indication of what’s to come for other areas of Melbourne as timetables and routes get reformed by PTV.

It’s important because long connection times are a huge barrier to more people using PT. If they don’t have funding for frequent services, they have to make sure the infrequent services connect properly.

I wonder if they’ll actually properly promote it to people, such as including train connection times in bus timetables, as done in Queensland and elsewhere.

Good to know that things are headed in the right direction.
Would you know if the buses are fairly “direct” or would the average commuter out there still hop in there car to get to the station, to avoid 40 minute journey to travel 5 km as the crow flies?

I think pulse timetables tend to be over-rated. As you point out, they are bad in the counter-peak direction.

Where the buses are passing by the station rather than terminating there, they are also not much good.

@Roger, a fair point. A quick check of route 481 shows it takes about 15 mins. Google Maps’ optimistic estimate (via the most direct route) is 8 minutes. Not excessively bad for a bus route. None of the routes involved are very long.

@enno, these pulse timetables are poor in the counter-peak direction because of the train times. Doesn’t mean that’s always the case, and as I said in the post, if the services are infrequent, it’s better than no co-ordination at all.

Interesting comment about train times in bus timetables, I’ve got a couple of Metlink timetables from 2008/9 that include train departure/arrival times as appropriate (though the definition of “connection” tended to be rather slack!) Have they stopped doing that? Or is it a deficiency on the PT> site? Or a refusal to acknowledge the (former) V/Line trains?

Perth also include train connections on bus timetables, or sometimes even bus connections…

Will the buses wait for the trains, if they are late?

Not so much an issue if there are frequent buses, but if there is only one or two per hour (sure there are plenty of examples, unfortunately), it sucks if your train is late and the bus has already gone past.

@enno – Pulse timetables, if done correctly make a huge difference to low frequency routes. They can effectively cut connection times to a few minutes. If you believe the concept is “overrated” you obviously haven’t spent 23 minutes waiting for a bus just outside of a train station very often.

Actually the Metro weeknights off peaks (8pm+) to Sunbury REMAIN at 1 hourly intervals on weeknights – the SAME as they are right now with VLine. Also, the busses meet vline trains well now, and the drivers wait for the vline trains (up to a point).

So, with the current Vline/Sunbury Bus hookup an 8:15 city departure is possible. This changes to a EARLY ~7:30 something train from the city. Bad outcome if you ask me – but nobody seems to care (journos or pollies that promised ‘better’).

Don’t get me wrong, the 12 minutes in peak is good – and some semi-express…. but it’s not all good news.

the question that I ask is why are the off peak frequencies so bad? Why can’t every train to Sydenham go trhough to Sunbury? What’s going to have to occur for this to happen?