I think most people would agree that with Myki we’ve got a problem. A system which is enormously expensive, which is generally less responsive and reliable than similar systems elsewhere, not to mention not offering a single use ticket option.

But one argument I don’t buy is that Metcard is perfect. The bureaucracy will claim it was near, or at, end-of-life. And certainly it doesn’t work perfectly. Only a couple of weeks ago I watched Metro staff at Flagstaff trying to unjam a ticket from one of the gates. 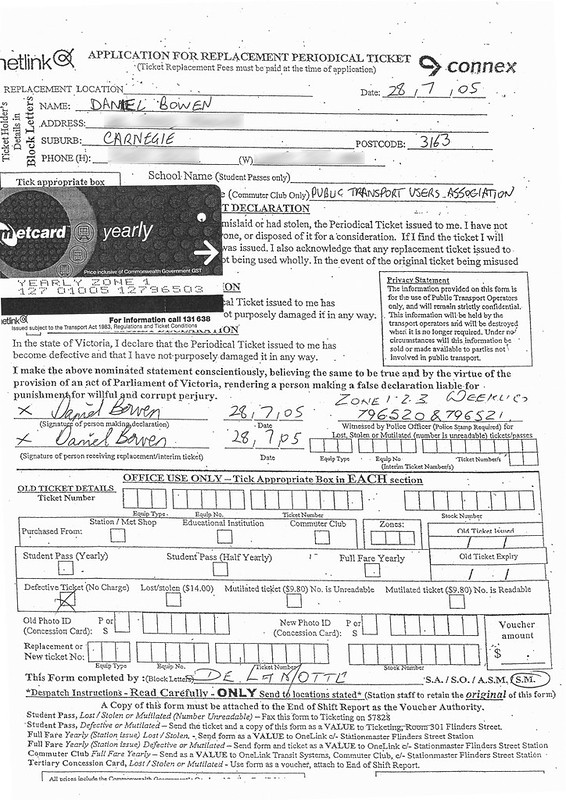 In fact, Metcard never really did work perfectly. A big part of the problem is the mass of moving parts.

Here, from seven years ago, is a photocopy of the form I filled-in to get my Yearly ticket replaced when it went kaputsky part way through its twelve month life. At least with a contactless card such as Myki, such things (while not unknown) seem to be a lot rarer.

But how does reliability compare between the two systems (even taking into account that Myki is a bit hobbled for a few more months by tram and bus drivers not having any control console)? PTV’s Track Record has details of Metcard reliability, but not Myki. Surely it’s time this changed.

One theory – the inclusion of Metcard reliability data in ‘Track Record’ was part of the original Automated Ticketing contract with OneLink, and the TTA didn’t write the same clause in the Myki contract with Kamco.

On the other hand, this response from the Department of Transport suggests that the data will be published in ‘Track Record’ once “the system is in a steady state of operations (ie post-transition from Metcard)”:
http://www.parliament.vic.gov.au/images/stories/documents/council/Select_Committees/Trains/Answers/DOT_Answer_from_22_July_Hearing.pdf

One of the main problems with the state government is that every time there is a change of parties everyone gets the arse and all their mates get hired. Takes at least a term to get everything up again.

Myki can’t even refund via bank to bank transfers, have to send a cheque I have heard.

Well that has a purpose. A lot of the cheques never get presented.

@Enno: There’s a substantial percentage of Aussies that have never had a cheque account, or use bank tellers on a week to week basis, so these cheques for small amounts just build up in that stack of paperwork. I’d be happy if they eliminated them, maybe banks would too, given that the clearance for them hasn’t changed in the 40 or so years I’ve used them, and the processes for writing cheques to present to retail outlets isn’t getting any better.
( /end rant on cheques)

ACT use a similar thing, they seem to work
http://www.transport.act.gov.au/myway/index.html

Hard to see what can go wrong with an arphid system.

As far as I know, you don’t need a cheque account to deposit cheques into.

Lots of people who don’t have a cheque account and don’t write cheques, still have to deposit pay cheques and tax refund cheques and government handout cheques and medicare rebates into a bank account.

The point I was making, apparently not clearly, is that a lot of people forget to take small cheques to the bank, and that is why a lot of companies which have to send out small payments, or refunds, like to use cheques, because they know a lot of them will never be banked.