As noted by this post, the figure of “transit boardings per person per year” is something of a simplistic measure (particularly given issues around what’s included and what isn’t, and whether public transport networks are structured to encourage single vehicle journeys, or anywhere-to-anywhere trips using lots of transfers).

But still, it does help give a rough indication of how cities are doing at getting people on board public transport — in terms of service quality, urban form, and the strength of central cities.

The article above had figures for Seattle, Vancouver and Portland, and I’ve tried to pull together some figures from elsewhere. 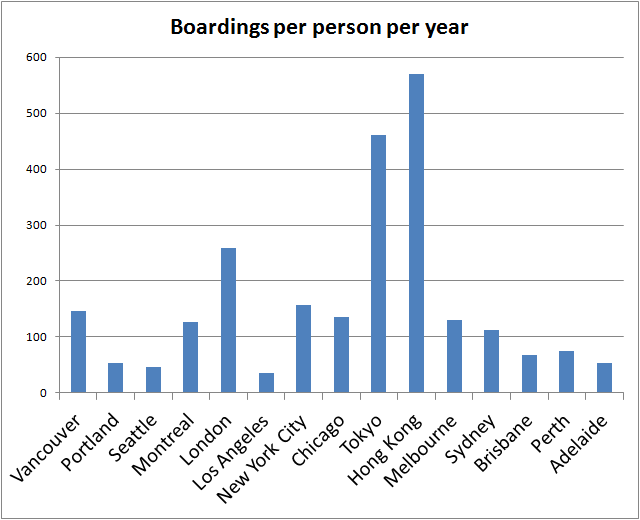 I don’t have the time to go meticulously hunting down these figures, so for Tokyo and Hong Kong I’ve used the figures here, which date back to 1990 and ideally should be updated. It’s interesting to note that their figure for Sydney in 1990 was 160 — as best I can tell, this has dropped markedly. Perth was 54, and this has gone up to 74, perhaps reflecting the great stuff they’ve been doing, particularly with the expansion of their rail system. Likewise, Vancouver has gone from 117 to 147.

And Melbourne? Thanks to Sydney’s fall, we appear to be the highest of any Australian capital city.

A big factor in these figures is the quality of service. If it’s not there, you can’t use it. If there’s a frequent network of services, you can use it for more than just the daily commute.

Another big factor is the city itself — urban form and population density. But that’s a topic for another day.

7 replies on “Public transport boardings: how does Melbourne stack up?”

Here’s my best effort at calculating boardings per capita for Australian cities: http://chartingtransport.com/2010/11/13/public-transport-patronage-trends/

Whether Sydney is higher or lower than Melbourne all depends on where you draw your boundary for Sydney and how you apportion CityRail patronage – which covers an area well outside the Sydney Statistical District.

I would like to be able to calculate PT “journeys” per capita for a number of cities, but it requires data from household travel surveys which isn’t readily available in most cases.

Melbourne inflates its figures with its wacky city loop operation.

Large numbers of Melbourne train users have to change trains just to get where they are going in the CBD. Which apparently counts as two boardings.

The compact size of the Sydney CBD and the choice of at least 3 stations on all the routes means that the railway puts nearly all passengers with a CBD destination within walking distance of their destination. There would be a few lazy people who arrive from the suburbs at Wynyard and then change for a train to St James, but they would be few, when walking is quicker. A few people would change trains but not on the scale of people changing trains at North Melbourne or Richmond or Flinders St.

The point of the previous comment being, for the public transport fanbois, a higher score on this measure would be considered to be more virtuous.

I’d question the merits of a scoring system on this basis, where a higher score is achieved by actively inconveniencing the customers.

@enno, are you sure an interchange counts as a ‘boarding’? If you change modes, yes, but I really can’t see cross-platform tranfers (ie Nth Melb, Richmond) to change loop trains as being counted again.
The interchange might be inconvenient, but if it allows higher frequencies overall, the interchange penalty is offset by a more frequent and reliable service (a net gain), hence its implementation.
Actually I think they need to go further and stop the lunchtime loop reversal, now that is wacky.

I think the operation of the loop is planned more around actively AVOIDING the need for an interchange, rather than encouraging it (and arguably, to the detriment of the operation of the entire network). It’s only recently that a few lines have prudently been taken out of the loop, but I would suspect that, Werribee, Sandringham and Glen Waverley morning peak aside, most lines involve very few interchanges to improve access to the loop stations.

Yeah, based on these figures (which showed quite low numbers for North Melbourne and Richmond) I would doubt that changing trains (without exiting the station) counts as an additional boarding.

@enno – There is no way Melbourne is calculating changing trains at North Melbourne, Richmond or any City Loop station as two boardings. There’s no need to exit and re-enter any of these stations to change trains, so there is no way to count the figures except manually and that of course would be next to imposible during peak hour which is the only time it makes sense to try and count it.