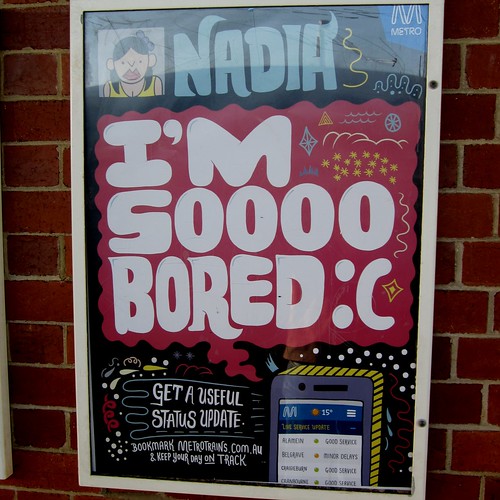 The phone screen grabs below are from 8:15am yesterday.

I’m afraid I don’t understand why these are different. Before the Metro site was upgraded, they seemed to be identical — I assume being fed from the same information source. Now some information doesn’t appear to make it onto the Metro site — despite continued advertising promoting it.

On the plus side, the Metro site is more informative than the Metlink app concerning the Hurstbridge and Lilydale lines, which had been suspended the night before due to wind damage.

But as far as cancellations go, passengers want accurate timely information about what’s happening, and the Metro web site isn’t providing it.

10 replies on “Why does the Metlink (PTV) app list more train cancellations than the Metro web site?”

Of course Metro won’t tell you their trains are in a mess! On Wednesday when the Lilydale line was closed, it was another demonstration of the classic refusal of all railway companies and most staff to share information with each other and, most importantly, with the passengers.

Announcements on trains are never co-ordinated with those on platforms. Drivers either aren’t told anything, aren’t allowed to tell it to the passengers using the PA system, or can’t be bothered.

Neither of those parties ever seem to have the latest information from the people running the signals and actually telling the trains where to go.

I’m really not surprised that the mobile apps offer a similar level of service and coherence to what we get on the ground.

The thing that always strikes me as rather odd about these cancellations in Melbourne, is that if you were a commuter from McKinnon or somewhere, you’d have to be some kind of rocket surgeon to know what the timetable at Frankston is, and which actual train you normally catch at McKinnon, isn’t going to turn up.

I’ve never been able to figure out when they announce on the radio that the 8.13 Frankston train isn’t running, does that mean the train leaving somewhere (where?) to arrive in Frankston at 8.13? Or does it mean the train that should have been leaving Frankston at 8.13? And if so, what time would it have been at my station? Am I expected to know what time my train that gets to Ormond at 8.30 for me to get to work on time was timetabled to have been leaving Frankston?

@Jen, in the context of morning peak, it would most likely be the 8:13 from Frankston to the City. Yeah you’d obviously need to look up when it gets to your station, but they can’t exactly read out every time on the radio. The SMS alerts do specify your particular station though.

I guess Jen if you were a regular commuter in Melbourne, you would know by now which train that is because it happens all the time.

The thing that is curious, is that they don’t do this in other places, but it is not obvious what they do instead.

In Sydney, it appears that they never explicitly cancel suburban services, they just run late, and occasionally out of timetable order.

The difference is possibly more illusory than real, and related to how the incentive contracts work.

Sydney Cityrail certainly have cancellations. Go to http://www.cityrail.info/about/our_performance/ and look at the figures for “Service reliability” — the August figure was 99.3% of timetabled services ran, and 0.6% for skipped stops.

They certainly do, but apparently not to the extent it happens in Melbourne, where there seem to be several nearly every day.

Most of them seem to be events related to weather or track obstruction, which affect several trains at a time.

Years ago, you used to hear announcements at the city platforms that “the 4:17 to Penrith has been cancelled for today only”, haven’t heard one of those announcements for a decade.

How did you get m.metrotrains.com.au to work on Android? Mobile version of the web page doesn’t work on Chrome, but the “full site” does. Metrotrains must have tried hard to make it not work :-)

@enno, if Cityrail cancels about 0.5% of services, it’s almost certainly happening most days. Whether you personally see it happen or not is another matter.

@Russell, I did have to delete the old bookmark, and from memory just went to the main site (which redirected me to the mobile site). It’s still a bit broken on Android – part of the navigation is munged.

I’ve been looking for more detailed information, but there doesn’t seem to be any. Years ago there were a lot of trains cancelled, that I was trying to catch. It hasn’t happened to me, not once in the last four years that I have been using them daily. Doesn’t mean it doesn’t happen.

Years ago, it used to happen a lot. During the two long spells I lived in Melbourne, also happenned a lot. It doesn’t seem to happen nearly as often any more.

One reason I suspect a lot of trains get cancelled in Melbourne, is that the train is late arriving at a terminus station. So they cancell the next service running in the opposite direction. Cityrail in Sydney seem to have tackled this problem by introducing longer turn-around times, and also by not turning trains around at all.

I’ve been travelling to Gosford quite a lot recently and therefore spending time waiting at Hornsby station. Trains used to arrive at Hornsby on the North Shore line and the Northern Line, and then turn around and go back towards the CBD. What I see most of them doing now, is arriving from the CBD, unloading the passengers, and running into the depot. And then a few minutes later, a different train set emerges from the depot and goes to Hornsby platforms to pick up passengers and start the service.

Although this is probably poor for productivity, it means that they don;t have to cancel any services there because of a late-arriving train, I guess.