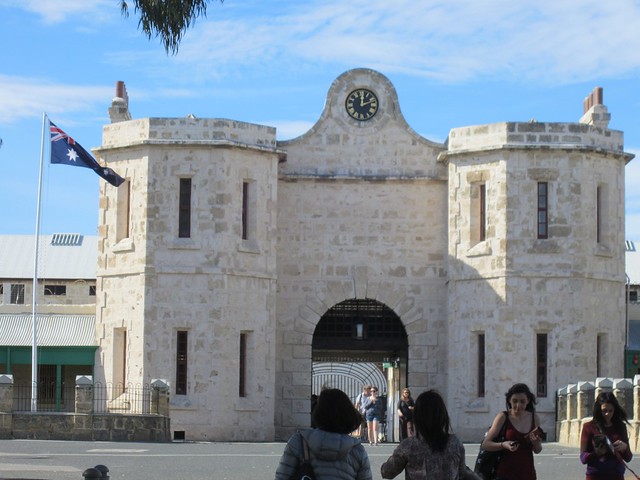 We were dropped off in Fremantle at the Prison, where we’d booked for the Tunnels Tour. The Tunnels Tour, perhaps unlike more conventional prison tours, involved getting a safety briefing and an alcohol test, and then we donned gumboots, coveralls, helmets and safety harnesses and headed down a 20 metre shaft to tunnels underneath the prison.

Tristan, our somewhat sardonic tour guide, with a mix of informative history and bad jokes, led us through the tunnels, including wading through a fair bit of water. We were lucky enough to be in a group of just 5, which I think made for a more enjoyable tour. 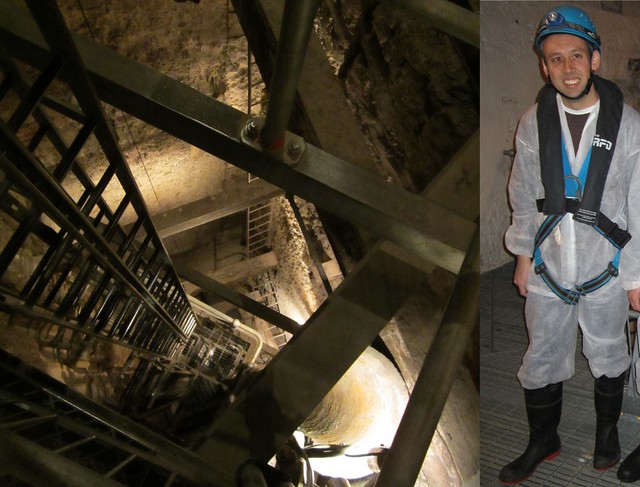 Shaft inside Fremantle prison (and my very handsome safety gear)

Then came the boats. 1-2 to a boat, we paddled around the more water-flooded tunnels of the prison, ducking under supports, hearing more about the history.

Altogether it was an amazing experience, and although we were able to get a photo at the top in our gear, alas no cameras were allowed to be taken down. I can’t recommend this tour enough.

Afterwards we plodded around Fremantle, looking through the market and making a stop at Timezone — an establishment that’s a little hard to find in Melbourne nowadays. Despite it not yet being WA school holidays, central Freo was pretty busy, with plenty of tourists. Every so often a CAT bus (Central Area Transit, the free loop buses, operating two routes, the blue and the red) would come through. Notable on the day was that the “Blue CAT” was very clearly red. 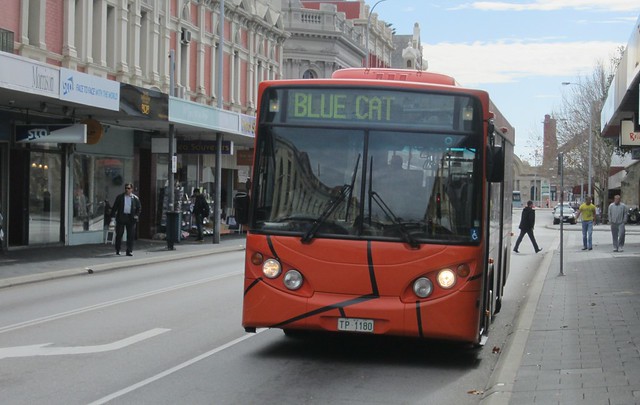 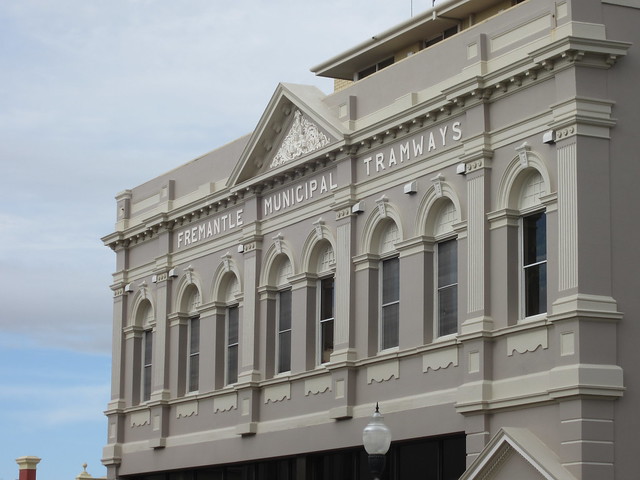 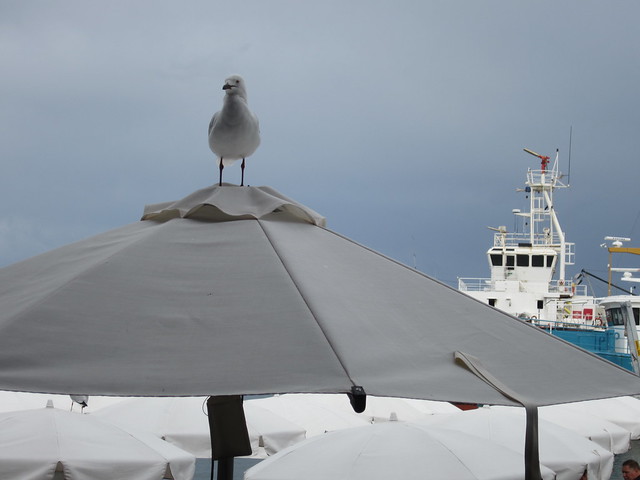 After a stop at the post office for some stamps, we headed down to Cicerello’s on the water for fish and chips. Well, they claim to have the best fish and chips in the state, so we thought we’d better try it. While the restaurant is almost the antithesis of a local fish and chips shop — it quite obviously set up to handle huge crowds — the food was pretty good, though I suspect Flaked Out back home in Bentleigh would give them a run for their money.

We took a turn on the ferris wheel nearby, checking out the views over the ocean and over the town. 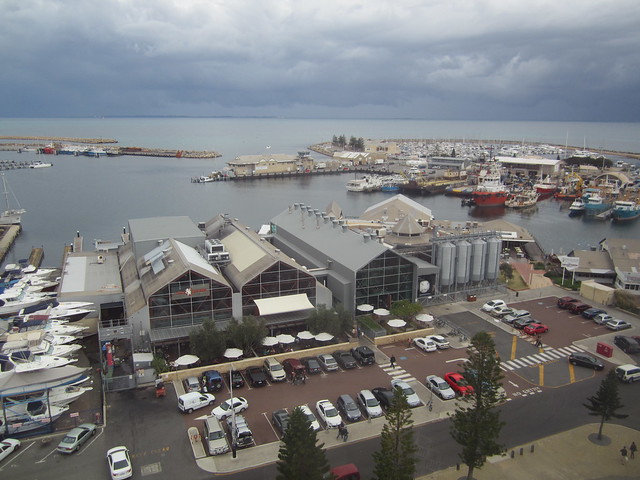 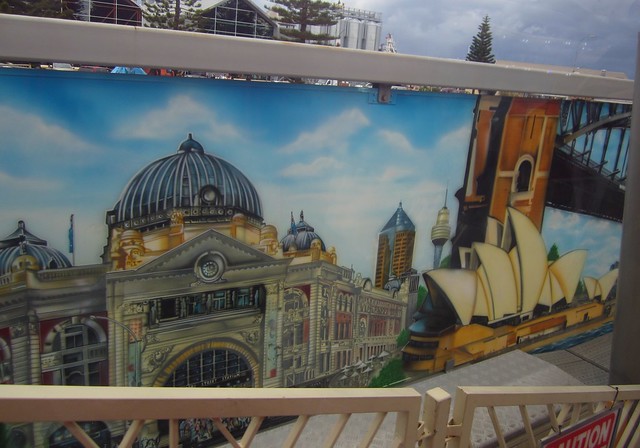 A familiar sight from the ferris wheel, Fremantle

Then we caught a CAT bus back to Freo railway station, sorted out train tickets (more about this later) and caught a train into Perth.

The train got quite crowded thanks in part to after-school loads, but we’d got seats since we’d boarded at the start of the line. Perth station was pretty busy — they were obviously doing some major works on and around some of the platforms, and a sign proclaimed it was part of Perth City Link — involving putting the inner section of the Fremantle line underground. 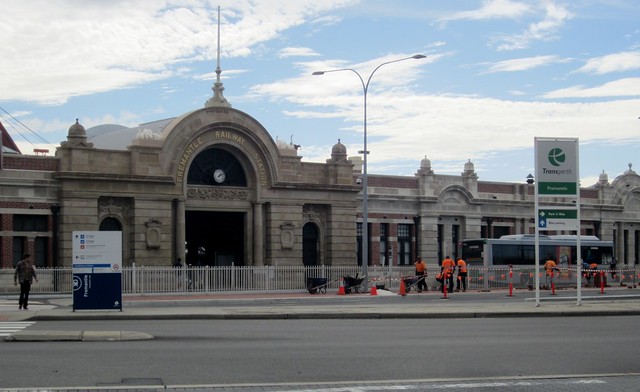 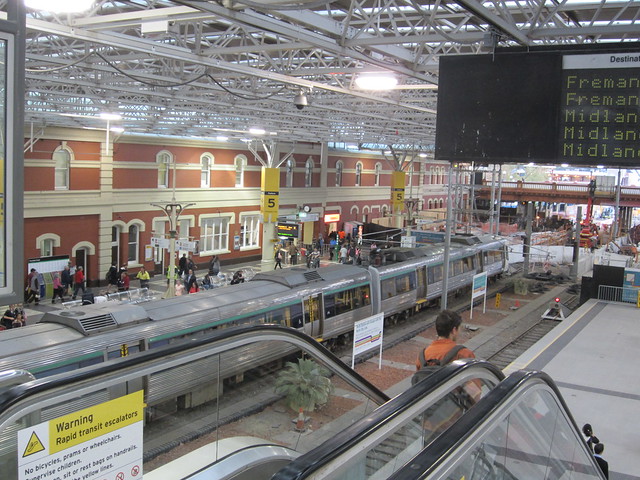 It was raining, so we only had a short walk around, mostly undercover in the shopping centres adjoining the station.

We did look inside the Perth ABC Shop, where I found a discounted $5 copy of The Plank (the 1967 version) on DVD — it caught my eye because Eric Sykes had passed-away a couple of days before, and I bought it for us to watch when we got home. (Much of it hasn’t dated very much — the glaring exception being the scene with the girl hitch-hiking with two men in a van.)

Then we headed down into “Perth Underground”, the underground section of the station to catch a Mandurah line train to where we were getting picked-up. Due to the aforementioned station works, it was quite a long way from the main part of the station to the underground bit — in fact we discovered the next day it may have been quicker to go in via the other entrance, in the Murray Street mall.

It was rush hour by this time, and the trains to Mandurah and Joondalup seemed to be departing every few minutes, many of them quite crowded. Great to see a railway line completed only in 2007 so busy. We zoomed past the cars on the freeway and quickly got to Murdoch. 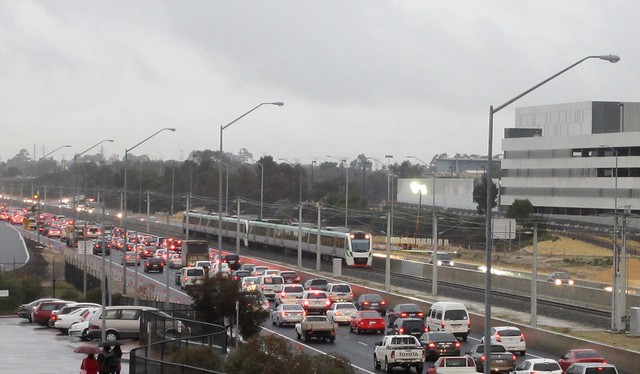 Due in part to the multiple car parks at Murdoch station, and thus the multiple pickup areas, there was some confusion about precisely where to meet my aunt, which resulted in a delay getting back — it probably would have been quicker just to catch a bus — if we’d known which one to catch. But no matter — eventually we got there, put our feet up, had dinner, watched Micallef and headed to bed for a good night’s sleep.

The train whizzing past the nearly stationary bumper to bumper traffic is a great advertisement for public transport. no wonder vicroads doesn’t want trains along eastern freeway – it would highlight how much more efficient public transport is

Your comment about not knowing which bus to catch at Murdoch is telling. Yes, there are a lot of buses in Perth, but they’re not visitor-friendly.

I’m suprised about your Murdoch comment. To go due east or west you get the 98/99 Circle Route. For anything else, I think there’s a big map or at least a suburb and route list near the station exit on the south side of South St. There may also be a combined timetable listing all departures, so you know whether it’s worthwhile waiting for a bus before you go to the stop timetable.

Local off-peak bus service levels aren’t particularly high (often less than Melbourne) and (being a freeway line) pedestrian connectivity is terrible. However when near a similar station (Bull Creek) am peak last week I noticed a steady stream of bikes coming out of one of the housing estate entrances along Leach Hwy, presumably station bound.

I’ve found the Murdoch and Bull Creek feeder routes to be generally quite good by Perth standards, with a few routes every 15 minutes on weekdays and some even on weekends and a even more routes every half-hour on weekdays, with some good east-west connections to the other southern railway lines, though I guess the presence of so many main roads facilitates this. It’s mainly the other lines and the further-south suburbs that have relatively infrequent feeders.

Also I thought it was common practice in Perth to include local area bus maps and timetables at stations, I think I remember there being one at Murdoch last time I was there.

To clarify: judging from the amount of bus information I saw generally at stations, and from what I saw at Murdoch, there would have been no problem for us to catch a bus if we’d planned to do so in advance.

In fact I did end up taking a look using my mobile and the Google Maps transit planner (which is running in Perth, unlike most other Australian cities) which gave us all the information we needed.

The issue was that once our pick-up was on the way to collect us, we didn’t want to change plans and catch a bus instead.