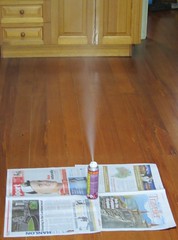 This blog post is mostly for my own purposes, to mark when I bug-bombed the house, which I have done over the weekend.

I last did it about 5 years ago, and it seemed to be relatively effective… for a while. But over this past summer, there seems to have been about a cockroach per week popping up, so it was time to get it done again.

I do wonder though if I shouldn’t be investigating (or rather, paying someone else to investigate) where they’re coming from. Is there (for want of a better term) some kind of cockroach nest nearby? Ugh.

In the meantime, I’ve also found for the first time in years that mice are getting into some of the kitchen cupboards. They’ve nibbled away at a packet of flour, and left droppings in one of the drawers. I’ve put down some poison, which they seem to have happily devoured. Again though, I don’t really know where they’re coming from.

about 6-7 years ago we had a mouse problem in the kitchen and the rest of the house too… I didn’t like the idea of putting out poison for the mice, because then you just get dead mice in places you can’t get to, which would be pretty horrible, I think. We ended up getting these really clever mousetraps from Bunnings. (addendum: found a picture here: http://www.thegoodstore.com.au/d876-111/live-capture-mouse-trap/ )They’re sort of very wide angled boxes (think square tubes with a bend in the middle. There’s a lid that comes off one end, and a hinged door on the other end. You put some bait (we found peanut butter worked best) in the lidded end and sit the trap somewhere out of the way with the hinged end open and holding up the trap. When the mouse runs inside to get the bait, the weight of the animal makes the hinged door shut and the mouse is trapped inside with the peanut butter. Then you can dispose of the mouse in your preferred manner (the boys here seem to enjoy target practise in the toilet!)
Turns out the mice had been getting in via the kitchen floor and beside the stove (after we had the kitchen remodelled, and we ended up having to buy a whole new oven/stove as they had been living quite cosily inside the griller, and leaving droppings in the oven trays. When we got the new stove installed, we made sure that the spaces on either side (where the kitchen cupboards and drawers are) were well sealed to prevent further invasions. It’s worked so far!

Mice are in plague proportions this year. You bug bombed five years ago………so that means you have been there longer than five years. Where did that time go?

I got woken last night to a crashing sound in the kitchen. I went to investigate and one of my cats was on the bench, amongst some dishes I’d been too tired to wash before going to bed, looking very angsty. I picked him up and suddenly a mouse darted across the bench. In retrospect I should have left him there, but I had no idea that’s what had caused Ziggy to seem all mental. Hopefully one of the two cats will get it in the next couple of days. Although I don’t like their chances, far too lazy and fat those cats.

Roaches can come into your home many ways including your groceries and cardboard boxes. Most likely they just came in from the outside as the weather has turned cooler. Cooler weather will drive the mice into your nice warm home too. If your home has a crawlspace (as opposed to being built on a concrete slab) the crawlspace can give mice and roaches good access so seal up any gaps around the lower parts of your house and suff some steel wool into any gaps in the kitchen where the mice are getting in. They can squeeze through surprisingly small spaces. Bunnings or some other local hardware store should have what you need.

Besides making great pets cats are of course good for keeping your place pest free too as they will play with, kill, and eat most any living thing that comes into “their” house and I highly suggest one or two.