The Chesty Bond singlet, something of an iconic Australian brand, used to be made in Australia, but is now made in China. 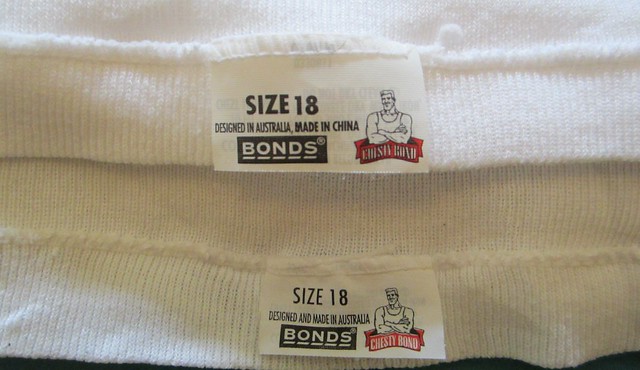 I find that a little sad, but I suppose it’s a sign of the times.

I seem to recall hearing on the news the other week that manufacturing as a percentage of Australia’s Gross Domestic Product had fallen from 12% to 8% in recent years, and figures on TradingEconomics.com appear to back that up.

At least one group of manufacturers get massive subsidies: the car industry. How much? This Productivity Commission report noted:

Wow. And that was in 2008… recent grants would imply it’s jumped since then.

One reply on “Chesty Bonds – another iconic brand, now made in China”

Of you lost your manufacturing job, it’s YOUR FAULT. You shgould have gone to uni and gotten a degree and get a MODERN job for the MODERN world. Like engineering, which guarantees high-earning employment for life.