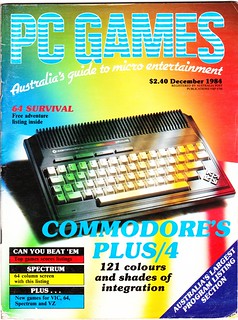 PC in those days simply meant personal computer, not necessarily the IBM/Microsoft platform it does today.

Australian PC Games ran for, I think, perhaps about two years in the mid-80s, during the boom of 8-bit personal computers. It was put out by the same publisher as Australian Personal Computer, which is still around, but had more of a games focus.

Apart from games reviews and tips, it also had features and reviews of new microcomputers — at the time, 8-bit computers such as the Commodore 64 were incredibly popular, and the likes of the Atari ST and Amiga were just starting to appear on the scene.

The magazine also had games listings — something unheard of these days (thanks to cover discs and the Internet), they’d print program code in the magazine for readers to type in. Apart from games they also had a running series called PCG-64, which was machine-code listings of BASIC language enhancements for the Commodore 64, many of them sent in by readers.

I’m only reminded of PC Games because the Retrogaming AUS web site has started up a Wiki which has a page on it. To my lasting regret, at some stage in the 90s I cleared out almost all of my copies of PC Games, except for one: December 1984.

One of the regular features in PCG was the Challenge Chamber. People could send in their high scores in various games for listing in the magazine, and PCG would periodically call in some of them to play in their “Challenge Chamber”… just to make sure they were as good as they claimed.

My friend Merlin sent in a dizzyingly high score for the Commodore 64 pinball game Night Mission, and one Saturday in late-1984, PCG got him and another 13 year-old called Paul (who was a whiz at Pogo Joe) to come in and play.

It turned out the PCG Challenge Chamber (the Melbourne version at least) was a magazine office next to Elwood Post Office — and just down the street from my house. I managed to invite myself along and watch the challenge unfold.

After a while getting the C64s organised and hooked-up, both Merlin and Paul played. The account of the Challenge appeared in the December 1984 edition of the magazine… 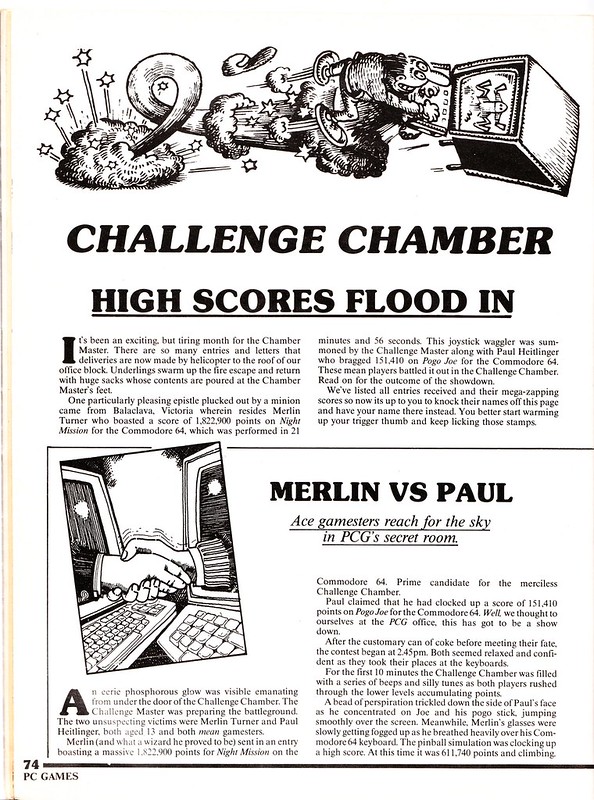 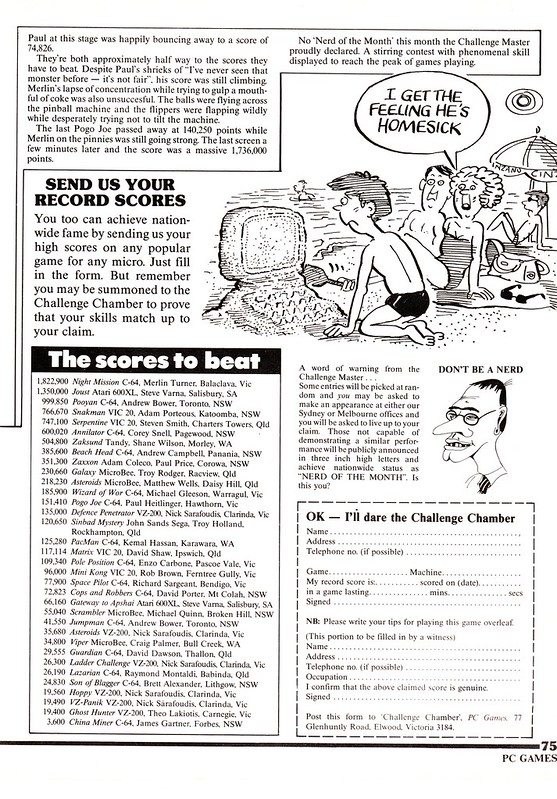 7 replies on “Flashback to 1984: The Challenge Chamber”

Did the mag come accompanied by items of interest on a 5.25 floppy?

@Andrew, no; I suspect this was too expensive, and a lot of people didn’t have disk drives — plus this was a multi-format magazine, so only a small proportion of people would have been able to make use of it.

I have a feeling one edition did come with a *record* though. (If it wasn’t PCG, I certainly remember getting it with another magazine around that time.) You were meant to record it onto a cassette, then play that into your computer. I don’t recall it being terribly easy/successful, but it could at least support several formats of computer.

Yep, there was definitely a record with one of the issues. It was a green, floppy thing, if I remember correctly, and I didn’t have any success getting it to work with my C64.

I threw all my PC Games magazines out some time in the last five years. Sad, but I’m happy to not have them taking up space anymore.

I do not recall having thrown out the record, though, so either it has been lost in one of my many house moves, or it will turn up at a later date, very unexpectedly.

@Paul, thanks – yes now you say it was green, I’m remembering it more clearly.

If you’ve got any old video game mags you plan to throw out, tell me first :-)

lesser remembered than what ?

Hey all, I’m the Paul in the article (someone sent me this page). This is too funny. When I started reading the article, I thought “why would he send me this, this is real nerdy.” But as I kept reading, a strange feeling came over me, like deja-vu. Then I saw my last name and it all came back to me. I still play the occasional computer game now. Talk about a blast from the past! I’m happy to do a AMA (reedit reference) about this session! :)

hahahaha, welcome Paul H, to the reunion (of sorts)!