The Age Online reports this morning gates at Flagstaff were opened to clear long queues that had backed up to the escalators. This has also happened several times at Parliament and Southern Cross recently. 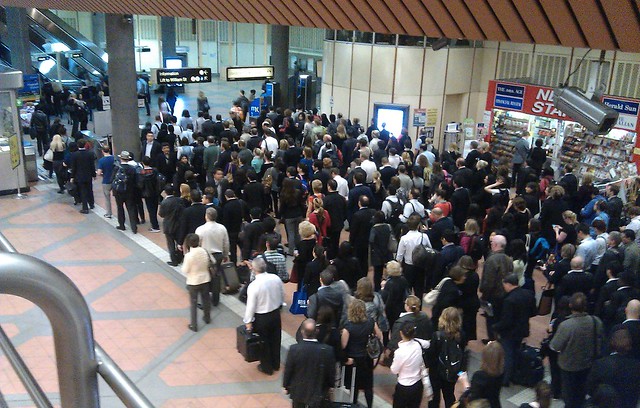 It’s a combination of growing patronage, new Myki users swiping or rubbing instead of touching and holding still, and old Metcard gates that respond slowly or not at all to Myki cards, and don’t give feedback to indicate why they won’t open (eg no credit left, or you didn’t touch-on at the start of your trip).

Figures from two weeks ago indicated Myki use was at about 40% of ticket validations. It would have gone up markedly since then, particularly among 9-5 commuters using Weekly/Monthly/Yearly fares (which can no longer be bought on Metcard).

From what I can see, the best way forward is probably to accelerate the rollout. Rip off the bandaid, as it were.

1. Immediately start replacing the old gates with new in the CBD stations. There are limitations with how they do this; it would have to be a bank at a time, but most stations have spots where this can be done, for instance at Flagstaff you could do most of them, leaving the two Metcard gates closest to the booking office alone for now, which is enough during off-peak times, and queues at peak times would help encourage more people to switch.

2. Withdraw Metcard sales of 10×2 hour and 5xDaily tickets, as well as Sunday and Weekend Savers, to shift more people (including occasional users) onto Myki ahead of them being forced to switch when their local Metcard machines get removed (which is problematic; see below).

And to help reduce the instances of overcharging when they do need to open the gates, and also cut the queues at suburban stations in the evenings:

3. Cut the price of 28+ day (Monthly) Myki Passes, to make them more compelling, and let people know they don’t get charged extra if they don’t touch-off. This helps cut queues, and helps encourage more regular use of PT, including off-peak, weekend and evening.

(I don’t necessarily think the removal of Metcard vending machines at stations should be sped up. This part of the rollout is already proving problematic, particularly at unstaffed stations, and needs more thought. But more people, particularly regular users, can be encouraged onto Myki.)

17 replies on “Getting through the Myki pain: time to rip off the bandaid”

“and don’t give feedback to indicate why they won’t open (eg no credit left, or you didn’t touch-on at the start of your trip)”
Or the fact the gate’s myki reader is stuffed so please use another gate.

What about just getting rid of all zones? Then no one would ever need to touch off at all.

Good suggestion. I have been surprised at just how many regular users of PT have apparently been forced to switch to Myki for the first time (at least on the evidence of the lines etc). At my suburban station (Reservoir), we have 6 dedicated myki points on the outward bound platform but still have a major crush when disembarking in evening peak, largely due to people being unfamiliar with the process and believing that they have to touch off.

I am also perplexed by how opaque the myki information campaign is in instructing new users how to correctly touch off. In the article you link, the myki representative is quoted as saying “People are going up to the gate and are putting their card up to the reader and rubbing and swiping it, but for the best result they need to touch on,”.

To me that falls short of the goal of increasing information – surely they should have a consistent slogan which communicates to touch on and hold rather than suggesting people go to the website and watch a video – which underlines the suggestion that the process is complicated – exactly the wrong message you want to be sending to commuters.

I assume one of the ‘benefits’ in any cost/benefit analysis of smartcard ticketing included the vastly better trip data obtained by having start and end of journey information.
By discouraging end of trip touch off, this benefit is lost, so I can’t see it being pushed too strongly. Plus, it takes away from the simple touch on / touch off mantra. I’d say you can have more information to regular users (ie pass users) though – with time.

Dave, I can’t remember a single instance where trip data was actually used. Instead, we get manual head counts at specific points in the year. This feature of myki baffled me. I can see the logic, but I’ve never actually seen the process used. You’d think they would kill to use it: “Because of validations, we’re increasing morning peak services”. When did anyone EVER see that? It would also help reduce fare evasion at the same time. As far as today’s concerned, there’s some OCD beauracrat who’s salivating over key performance indicators used for no other reason. Makes me mad as hell.

So it seems (according to The Age) all barriers will be open at CBD stations during the peaks. It’s unclear if this is all the time, or just if crowds build up.
If the former, it’s a worry, as people won’t get the practice they apparently need to touch off properly. That, and fare evasion. It also doesn’t asisst some of the suburban stations suffering congestion.

The solution is just to do what Daniel is suggesting – switch as many gated barriers to myki as fast as possible!

@jon, apart from the fact that there’s actually 50+ zones covering all of Victoria, even merging the two Melbourne zones would be likely to push prices up. The example is Adelaide, with a single zone, which for trips comparable to most single-zone Melbourne trips now (eg 5-15km), is the most expensive in Australia.

@Dave, they threw out any hint of stats being useful in 2010 when they decided you no longer needed to touch-off trams.

Anyway, the most crowded time is morning peak hour, and Metcard (due to having to validate when boarding in the suburbs, and using your ticket to exit at the city end) already provides extensive stats. It hasn’t stopped the trains being packed, because lack of stats isn’t the problem – government willingness to properly plan and invest is the problem.

The Herald Sun online has a more extensive report on Metro’s reaction to this — just open the gates all peak hour (whether there’s a queue or not) and allow a free-for-all. So much for getting tough on fare evasion.

I go to Melbourne High, and well over the majority of our school cohort use the train system to some extent, meaning a large majority pass through South Yarra station in the mornings and afternoons. Regardless of which zone we reside in, a Student Yearly pass is always cheaper for daily users, which is most of us, and they’ve been issuing Student Yearly tickets on myki’s since 2010.
South Yarra station is a pretty small station considering the large amount of people who use it – what’s worse is that it only has FIVE barrier gates, of which in the past (it’s gotten better recently), you could expect two of the myki readers on the gates to be out of action.
Which means since 2010, I have witnessed in the mornings and afternoons that the attendant is very frequently left with no option but to open the gates, because otherwise, people trying to get in crowd up, as do people trying to get out, and soon, we find nobody moves anywhere. I’m surprised the media never picked up on this – or maybe it was always an issue, even with Metcards…
And of course with the opening of the gates, we have all the students from my school who are legitimate fare paying students passing through (who don’t need to touch off their myki’s), the people who for some reason feel they must insert their Metcard to exit even though the gate is being held open (which really makes me wonder why people are complaining about the extra touch-off step), everyone else, and of course, the small minority of passengers known as “fare evaders”.
All I can imagine in the future is mass havoc at South Yarra – I can’t imagine the final roll-out fitting in any more than 6 gates at best – definitely not enough to meet increasing demand as well as the already existing demand.

Despite the hilarious and sensationalised subheadline (save customers being crushed by angry myki mobs!!), the Herald Sun article is pretty bang on.

The fare evasion issue is obvious, but of more concern to me is the idea that people might get waved through the gate and then fined by ticket inspectors. That has actually happened to me using Metcard ages ago, and it sure made me angry, especially as my complaint letter and phone call didn’t get the fine dropped.

So if I have a zone one, 28+ day pass and I get on a train in zone one and get off in zone one… then transfer to a zone one only bus, i don’t have to touch off for either of these sectors?

@Ronnie, yeah Sth Yarra has been an issue for a while now. http://www.ptua.org.au/2011/04/28/potd-south-yarra/ — One idea is to build a new concourse at the northern end, for the new apartments and for MHS students. Would be expensive though.

What I really don’t like is that using MYKI will cost me more!
Most days I get on the train just after 9am – therefore I can get an offpeak daily at $11 for zones 1&2
Now with MYKI I get charged $11.08 each day.
May not seem like much but that’s enough to pay my share of the ABC for the day!

I like waht you said about MYKI @ Alan. MYKI is costing people more these days. Its only useful for one person. But for a family or group using MYKI will cost you more than fueling your car. I was going to the city with my wife and her cousin. By the time i calculated how much it would cost using our MYKI cards, it came to about $34. I decided to use my 4 cylinder car which i spend about $26 for a full thank. No train running the whole of this week due to maintenance. How true is that?

Just did some thinking and I figured that the Government is ripping us off with Myki. There’s an old saying “If it ain’t broke, don’t fix it”. Seems the convenience is only for the government sneakingly bringing it in to increase how much we spend.

Today I topped-up 6 dollars with 1 dollar in my Myki card from Watsonia to Heidelberg and after travelling for less than 10 minutes on the train it came as $3.00. In other words, they charge you off from the time that you swiped to the time that you get off whereas the old ticket system, you buy a ticket for a day or 2 hours. Unlucky since they are also removing the old “CONVENIENT” ticket system in April.

Greedy Government. Doesn’t matter if it’s liberal or labor, it has to stop! Let the public have an opinion, or at-least remove this time-per-pay non-sense! We pay too much for the petrol, fines, speed cameras, and living costs (electricity bills), so why do they have to charge more? Can’t the gov only spend on what’s needed like hospital beds, childcare, education (Highly unlikely)

@Anonymous, the fares on Myki are the same as Metcard. Your payment wasn’t for just that single trip, it was valid for 2+ hours of travel.