It was the culmination of many trips to Aussie Disposals: over the weekend we went camping to Walhalla – just for one night – at my stepfather Peter’s suggestion.

I haven’t been properly camping for almost ten years, and had had to stock up: some more sleeping bags, air-mattresses, a pump, a tent, portable chairs, stronger tent pegs because inevitably the ones you get with the tent bend the first time you use them… 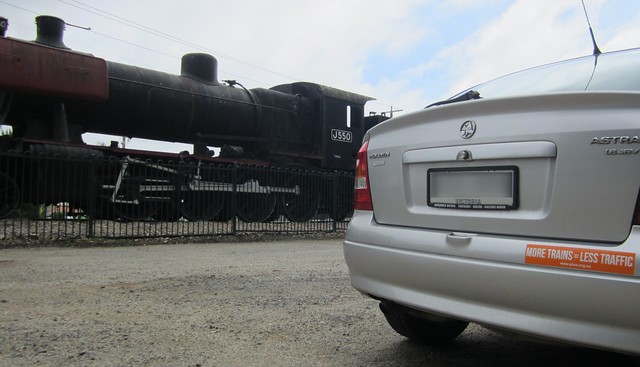 So we set out from Melbourne at about 10am on Saturday. After stopping at the Latrobe Street park in Warragul to eat our sandwiches (where we found this old steam engine) we met up at the nearby Aldi for supplies. Then we all drove to Moe and then headed up the mountain to Walhalla. A short stop to look at the Walhalla Goldfields narrow gauge railway station at Thomson, then we kept going, through Walhalla itself to the camp site.

Before long our three tents (one for myself, Isaac and Jeremy, one for Adrian and his son Leo, and one for Peter) were taking shape. I’d bought what is in theory a 4-person tent, thinking it’d be okay for three. With the airbeds, it was just room enough. 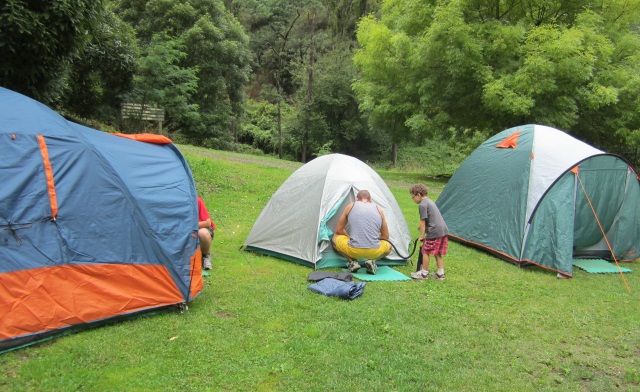 Peter and Adrian, accomplished campers, got the fire going and we sat around it, nibbling on snacks and chin-wagging for a while. My nephew Leo was particularly fascinated with the camp fire, but I think we all enjoyed its warmth. The weather was near-perfect — not hot, not cold either, just a smidgeon of misty rain.

The firewood Peter had picked up along the way started to run out, so most of the party jumped in the car to go and look for some more, leaving Leo and myself at base camp.

They returned with most of a tree, that they’d found by the side of the road somewhere. Peter set about starting to cut it up with a hand saw, but a bloke from the next camp site along kindly offered to do it with his chainsaw, which saved a lot of time. That gave us enough fuel to run the fire for the rest of the evening.

Adrian, a better chef than the rest of us put together, cooked up some homemade hamburgers and a steak and lettuce. Most delicious. (He was right when he had proclaimed we would eat like kings.)

Young Leo was full of energy, so we went for a dusk walk along the road towards the town, as far as the mullock heap, then back.

More chattering away by the fire ensued, with Leo going off to bed earlier than the rest of us.

Before long we were shrouded in darkness apart from the fire, with the torches coming out to help us move about without tripping over tent ropes.

The fire had shrunk markedly from its peak, was still smouldering a tad when we headed for bed. Given conditions by that point were a little damp, and cool, and there seemed no chance of it spreading out of its well-established fire pit, so we let it go, as did some of the other campers.

Despite some spraying of the inside of the tent with Aeroguard, insects had made it into the tent. Happily they didn’t bother us during the night, and I think everybody got a pretty good night’s sleep, despite me having forgotten to bring pillows, and us having to resort to rolled-up jumpers.

Someone said it was 6:30am (I may have asked, half-asleep, when I heard them getting up), and I found myself awake. The kids had all got up, and I followed after a few minutes.

Once again Adrian was in charge of cooking, and did some rather splendid pancakes, before we set off walking along the old tramway walking track into the town. The tramways were used to bring timber into the town to power mining machinery during the gold rush. 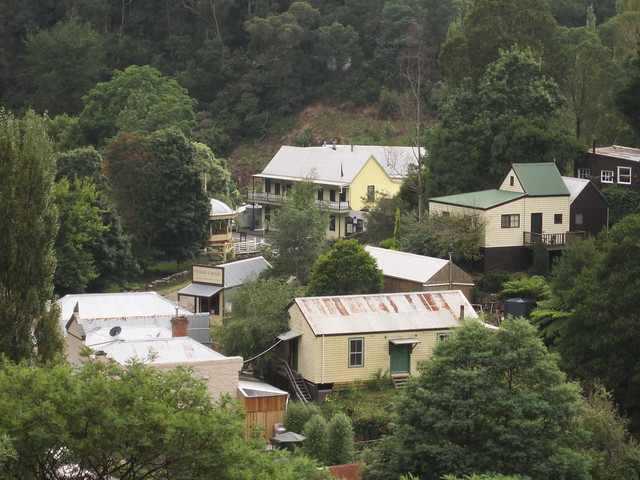 There were some excellent views of the town, and after following some steps down the hill from the path, we had a look around the town.

The whole has no mobile phone coverage, and I noted the only means of telecommunications — a traditional old red phone box in the main street — was occupied.

We walked back along the road to the camp site. After packing up the tent, sleeping bags and other equipment (which, obviously, didn’t all fit back into the bags it all arrived in) it was almost lunchtime and we decided to eat and then head towards home. We stopped at the Walhalla railway station for a quick look (but it was an hour until the next train, so we didn’t wait) before heading back to Melbourne. 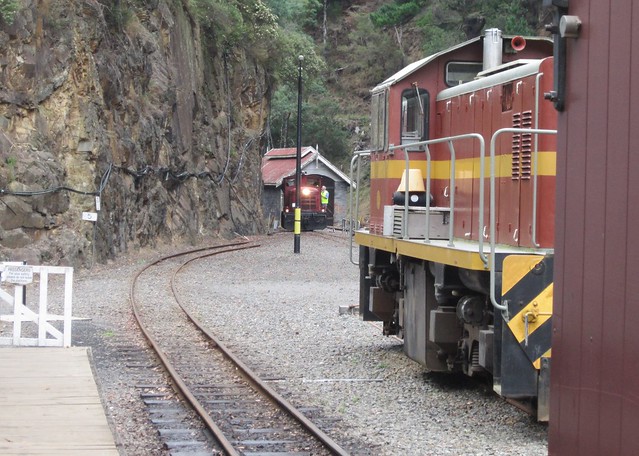 An enjoyable short trip. The kids are keen to do it again, as am I.

8 replies on “A weekend camping”

A great yarn. Good on you for going out of your comfort zone for you boys. My favourite part of the story is the guy who goes camping with a chain saw – luckily he only uses it for sawing wood!

It sounds like it was a great camping trip! how did you cope without your telecommunications though? haha

I love camping. In Britain though it’s wonderful l*if* you have the weather! Louise is a bit less keen although we have had some enjoyable holidays with the tent.

It is always an early discovery with tents that they comfortable accommodate 25-40% fewer people than the manufacturers claim!

The area looks lovely. Must check out where it is…….

Delighted to find it’s in the Shire of Baw Baw. What a brilliant name!

And here am I squeezing my 4 person family into what is nominally a 3 person tent. Admittedly E’s still bitty, but I think we’ll be right for the coming summer too…

That red telephone box isn’t as traditional as you might think – apparently you can send text messages with it!

Haha conceal your number plate ! As if people don’t know who you are.