MX got to this before I blogged it.

This issue is around Myki Pass (the equivalent fare to a Metcard Monthly/Yearly, but available for any number from 28 to 365 days).

If you go to a Myki ticket machine however, it rounds up to the next 10 cents, eg $124.70. (Myki machines take notes, but do not accept 5 cent coins; this is permitted within the law.) 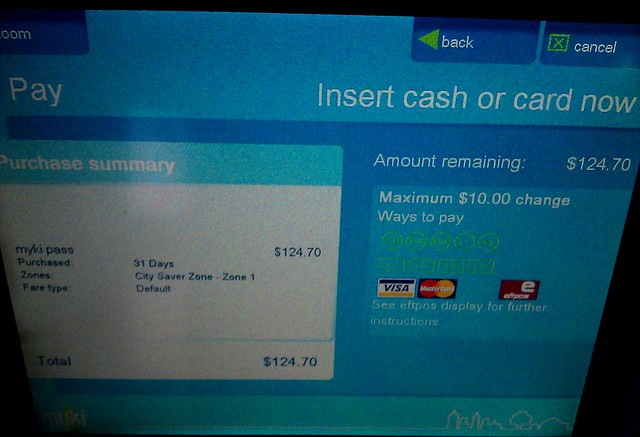 (Note also the reference to City Saver zone, which no longer exists on Myki.)

This rounding is as per the ticketing manual (page 65):

“If a myki pass fare is shown as, or is calculated to be, an amount ending in a multiple of one cent, that amount may be rounded up to the next 10 cents at the point of sale. In that case, the rounded amount is deemed to be the fare.”

Contrast this with the advice of the ACCC. I’m not clear if it’s merely a recommendation or outlining the legal position, but here it is what it says (referring, obviously, to rounding to the nearest five cents, not ten):

Rounding is on the total value of the bill. Individual items should never be rounded.

And where a consumer pays by cheque, credit card or EFTPOS there is no need to round at all.

Businesses who round prices outside these guidelines may be in breach of the consumer protection provisions of the Trade Practices Act and State/Territory Fair Trading Acts as it suggests that items are not available for the advertised price.

So the first problem here is that Myki’s rounding is always up. This contradicts normal practice, and advice from the ACCC, which says rounding may be up or down, not always up.

The second problem is the rounding takes place if paying by credit or debit card, which again contradicts the ACCC, which says rounding should not take place unless paying cash.

Obviously it’s only a few cents each time, but could add up to a substantial amount of money given a large number of users.

Regardless of the legalities, it is clearly not in line with common retail industry practice, and is out of step with community expectations.

And there’s enough anti-Myki sentiment out there as it is without them putting even more people off-side with silly stuff like this.

18 replies on “Myki machines always round prices up, to the next 10 cents”

A small note: the Trade Practices Act has been repealed, now replaced by the Competition and Consumer Act 2010. It’s largely a similar peice of legislation though, so your concepts stand.

As you say, a few cents nobody would miss. But with tens of thousands of cards, it could add up to a lot of money. Interesting to see what action will or won’t be taken.

If somebody specified this, then they should be publicly castigated. If it wasn’t specified then its just lazy.sloppy coding.

Either way, it should be fixed ASAP

There are lots of things wrong with the myki machine. the screen shot above shows “Amount remaining: $124.70”. What does that mean? What other money machine or web-based payment system uses this expression?
Also, when you pay by credit card “insert card” appears on the main screen AND on the LCD display. When you insert your card, after a few seconds the LCD display says “Remove card”. but the main screen still states “insert card” until you get your receipts. Two years later, why haven’t these problems or confusions been fixed?

A very minor point, but the concept of “legal tender” (re: not accepting 5 cent coins) is only relevant for the payment of a debt. There’s no debt involved so no restrictions on which coins if any Myki machines refuse to accept.

“If a myki pass fare is shown as, or is calculated to be, an amount ending in a multiple of one cent, that amount may be rounded up to the next 10 cents at the point of sale.”

This is typical writing from today’s modern, functionally illiterate bureaucrats. What does “an amount ending in a multiple of one cent”, actually mean ?

20c is an amount ending in a multiple of one cent. So even it is already an integral multiple of ten cents, they could round it up by another ten cents.

Roger, “Amount Remaining” means the amount remaining to be paid. That amount would start to drop if you started entering coins or notes. The self service checkouts at Coles and Woolworths show the same thing.

thanks, kiwiguy72.
Which is my point. If you are paying myki by credit card, you must pay the whole amount in one go. So why keep “amount remaining” stuck on the screen for the transaction.
Coles and Woolies only show “amount remaining” if you tell the machine you want to split the transaction methods or pay cash. If you pay by card only, you don’t get this message. So why can’t myki programmers do the same?

Because Roger, the amount is still remaining until paid!

So surely better to phrase as “amount owing” when the balance is first presented when paying by credit or cash, and change to “amount remaining” if a partial payment is made.

It’s little usability things like this that go to make the process easier, and they just don’t seem to be being made or even considered.

Just need to share this story with some like minds….. I have two myki cards – a registered spare obtained when they were free and a yearly pass one purchased via work. Couldn’t find my Myki card with Yearly Pass for the last two days so today call 13MYKI and they do a ‘block and replace’ (up to 10 working days to deliver new card). During security check she baulks at the address I give her but when I quote my old address she is happy. I tell her I have two Myki cards so make sure she blocks the Yearly Pass one.

Discover my ‘lost’ Myki card under a throw rug tonight. Call 13MYKI to ask for ‘block and replace’ to be cancelled only to be informed that it’s not possible and I’ll just have to wait for the replacement. Not so impressed as that was not stated during the earlier phone call but I get that I set a process in motion and have to wear the consequences.

But, because of the weird address thing at lunchtime, I ask them to check that the Yearly Pass is the card that was cancelled. And tada!!! Neither of my cards have a ‘block and replace’ set on them. And the system shows that the account hasn’t been accessed by Myki staff since July 2011.

So the inconvenience of my stuff up has been negated by the inefficiency of their process. You didn’t get that with Metcard!

Oh really ? So myki falls over if you move ? They get upset if you are not living at the same place as last year ?

Supposedly 25% of people move every year, and the proportion of public transport users may be even higher.

Sorta related but… I have a yearly zone 1 pass and last weekend I put $10 on it because I was expecting to head into zone 2, which I didn’t end up doing. Before that, my Myki lived happily in my wallet (against the outside, sheltered from other cards by a bunch of receipts). It used to validated just fine almost every time but since the top up, it is taking a stupid amount of time to validate, if at all. Sometimes it gets a ‘multiple cards detected error’ but the composition of my wallet hasn’t changed. I can only think it takes longer to validate cos the machine is deciding whether to use the Myki money or the pass? Annoying…

Are you sure that you haven’t received a new card from your bank that has a PayWave feature? It’s very unlikely that you’d get “Multiple Cards Detected” unless there really were multiple cards, and the PayWave feature does interfere with Myki. If that’s the case, try separating the cards in your wallet and then only hold up the side of the wallet with the Myki card to the reader.

@Liz, I’ve got a Myki Zone 1 (Commuter Club) Pass and Money on my card. Works fine from my wallet (provided I keep my pay-wave/RFID Mastercard away from it). As Mike suggests, double-check you haven’t got any other proximity cards close to it in your wallet.

I have double checked my wallet, don’t have any RFID stuff in there, the only thing that has changed is that I got a student card (hello discounts!) but that is not near my Myki, nor does it have a magnetic strip or anything. I dislike being the person holding up the queue and then looking like it’s my fault cos I’m too lazy to take my Myki out of my wallet…

Does that student card allow you to make photocopies in the school library? Some new student cards may be RFID, even if they don’t advertise it.

Or, it may of course just be that your Myki is stuffed :-)

Thanks for the post. Good to know I’m not the only one unhappy about this rounding up malpractice by Public Transport Victoria. I happened to me when I topped up my pass using EFTPOS last week. $124.62 was rounded up to $124.70. I was actually unaware of such outrageous policy, so I complained, and all I got for a response was a quote of the “Victorian Fare and Ticketing Manual, chapter 5…”

Does PTV only has a rounding-up policy for myki pass?