I never quite believed I’d see much of the difference between DVD and Blu-Ray on an 80cm (32 inch) TV. But with brand-name Blu-Ray players now below $100, and releases such as the complete set of Star Wars movies out on Blu-Ray, this past Christmas seemed like the right time to jump in and try it.

One of the presents I got was the Blu-Ray of Tron: Legacy, which also included the original Tron movie. Since I already had the DVD of the former, I’m able to compare the DVD against the Blu-Ray versions.

The scene from Flynn’s arcade had a lot more detail on the Blu-Ray, but you can’t really see it in a photo, so I won’t post it here. Jeremy and I looked carefully at this scene and were able to identify the names on some of the machines, for instance, which is impossible using the DVD.

More stark is the difference in this shot from the lightcycles scene, first on DVD: 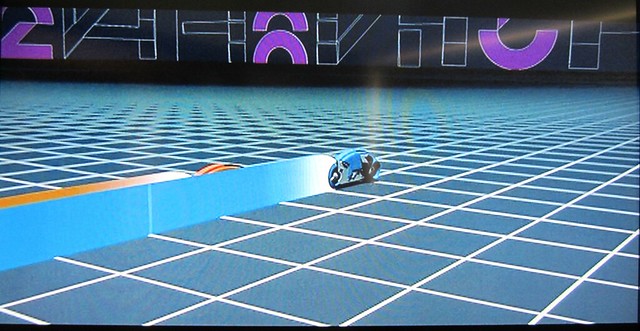 There’s a lot more contrast in this scene on the Blu-Ray version. I think it’s not just a format question, it’s also that they’ve taken a lot more care in remastering the video. But the resolution being better also undoubtedly helps, and this is particularly noticeable (on the TV, perhaps not in the photos) with the grid lines.

Things to keep in mind:

There’s no denying the higher quality of Blu-Ray, even on an 80cm screen.

Question is, which movies or TV would I consider worthy of upgrade, and at what cost? I can’t see myself shelling how lots of money for discs of movies I already own. But for future purchases, I’d certainly lean towards the newer format if the price is not prohibitive.

(I did find The Life Of Brian on Blu-Ray, with lots of extras, for $8 yesterday at K-Mart.)

So far I’ve shelled out for Blade Runner, the Star Wars set, Close Encounters (I sense a theme developing…) and the Back To The Future Trilogy. I’m thinking Baraka would be fantastic (I have seen it in 1020P and it’s amazing) and The Godfather trilogy too.

I lashed out on a Blu-ray player not long ago and chanced on a 3 for $40 sale at Sanity – I bought 6. And, yes, I think the quality is definitely better.

Inception cranked up to 11. Likewise Apocalypse Now. And Heat.

The DVD picture is clearly showing aliasing on the grid lines. Computer graphics are where HD is really an advantage. The difference on many Xbox 360 games is considerable.

3 for $40 is not bad. Often you find blu-ray discs that are 1 for $40. And they wonder why blu-ray is having a hard time competing with DVD.

I’m with you though, I suspect they are taking a lot more care with transfers for Blu-Ray as people are now able to see the difference.

The difference in those two shots is, as mentioned above, the aliasing visible in the DVD version. But this is created by the TV having a poor ability to map a standard definition image onto its high resolution display. When it shows a 1080 line Blu-ray image on its 1080 line display, it just has to map each video pixel to a pixel on the screen. But when it puts a lower resolution DVD image onto its 1080 lines of pixels, it has to decide how to allocate the pixels. A high quality TV would do a better job than a cheaper TV. A high-definition CRT (no longer made) would do it better than a flat panel which uses discrete pixels. This pixel allocation shortcoming is visible on most modern TVs when displaying standard definition TV channels.

The colour and contrast are different due to how the various colour levels have been set in turning it into a DVD or Blu-Ray, and isn’t due to the storage format at all.

Philip you make it sounds like there is nothing special about Blu-ray. Its image physically holds 6 times more detail, on a smaller screen less noticeable but on a 60″ or even projected several metres in size it looks absolutely stellar whereas a DVD looks utterly atrocious!

The mastering for Blu-ray is an entirely different class to DVD and not simply colour levels as you imply. We all thought a lot of work went into DVDs, but by comparison to Blu-ray no care was put in at all – remastering and restore work they have been doing to titles has been absolutely amazing.

Even a mere television series such as Star Trek: The Next Generation is getting the special treatment. On DVD was an improvement over VHS, but not fantastically so. The problem is the source material – filmed using movie film, but all editing thereafter done on video (including the FX). For the Blu-rays coming this year they have gone back to all the original film, cleaned and scanned it all in, and are painfully re-editing every single episode back together again as accurate to the original cut as possible. There was no alternative – simply bumping up the resolution of the old crap to HD would have looked even worse than the DVDs… not better.

@Chris – I assure you, plenty of badly remastered Blu-ray discs are being made. Its the same with any new format whether its music, video or photography. Your example may be true in some cases, but it’s certainly not true in all and yes some blu-ray discs are making films look worse. I can’t remember the example off the top of my head, but a friend recently showed me “invisible wires” that have suddenly become visible because of the remastering process with an old film he loves. It was quite funny.

I bought a blu-ray disc the other week off Amazon by mistake. Thankfully my PC has a blu-ray drive so I ripped it and created a digital file. I imagine that will be the one and only time I open the case.

Absolutely agree with you – the extra detail on older titles can also reveal the worst in them too.

Likewise there are some occasional shortcuts – I have a large Blu-ray collection and all are breathtaking except two, Robocop whose grain is so bad it wreaks havoc and The Family Man which I bet any money is an up-convert from DVD as it looks as bad as putting a DVD on

We treated ourselves on a new entertainment system, including a 60″ plasma.
My first two blu rays are Earth and March of the Penguins. The latter wasn’t particularly noteworthy, but the resolution increase in Earth is noticeable on that format.

Have borrowed several blu rays since purchasing the player, and generally a noticeable improvement in the visual quality – sadly, doesn’t improve anything else in a poor film :-)
Not to segue, but a friend’s copy of Avatar really brought home the improvement in graphics over dvd on the new TV. Beautiful!