(I’m at home today awaiting two tradesmen, so I’ve been a little creative.)

Here’s what I can’t figure out: since late-2010, the Frankston line has run every ten minutes between the peaks. In 2011 they tidied this up and made all those trains run direct to Flinders Street, and then through to Newport, with alternating trains going to Williamstown and Werribee.

Seriously, every ten minutes, Frankston, City, Newport, all day. That’s good enough that you can explore, hop on, hop off, and not worry about a timetable, between about 7am and 7pm Monday to Friday. It’s a model for all their lines.

So why aren’t they promoting the hell out of this? 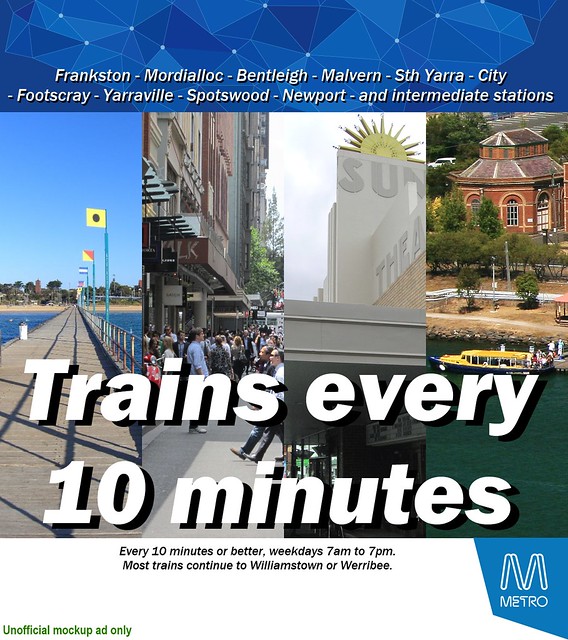 This is my quick mockup. It’s far from perfect. I’m not a graphic designer, nor a copywriter, but you get the idea. They should start with posters on their own stations; that’d be (almost) free.

Trains every 10 minutes is a good product, worth promoting

The Frankston to City to Newport service may not be perfect, and the bus connections to properly connect to it are particularly problematic at some stations, but this is one of those examples where an investment has been made in upgrading the product offering to a level where it’s actually good, and there’s been virtually no promotion of it.

It’s also a prime example of where Metro should be trying to grow patronage — during off-peak periods — because the infrastructure and fleet has been provided to meet peak demand, so any more passengers you get on board during off-peak is a bonus, providing you cheap revenue for little extra cost. 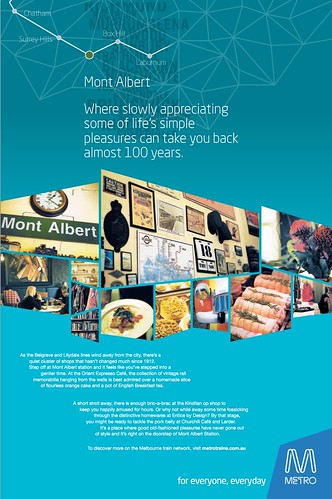 To be fair, they are promoting off-peak travel a little bit. But they appear to be ignoring which lines have the good service, and instead promoting the destinations — even when the trains run to a mediocre 20 minute frequency.

I suspect a promotion needs a mix of both service and destination to be successful. And oddly, apart from ads in MX, the only place I’ve noticed their “Toorak” posters is at Toorak station… shouldn’t they be placed at least on every station on that line, if not network-wide?

(I’d be interested to know how many people have noticed Metro’s Neighbourhoods promotion.)

Meanwhile, apparently Metro’s publicity department are busy tinkering with Twitter — making the popular (10,000 followers) feed no longer useful by stopping posting service updates to it — though they now seem to be saying they will post major (multi-line) disruptions.

An odd decision. Metro’s Twitter feed was informative (but not chatty). Now it’s getting chatty (but not informative). There’s no reason it can’t be both.

PS. I’ve remembered that Yarra Trams actually has adverts/signs along some of its tram routes promoting upgraded frequencies. I’ll see if I can find a picture. And to clarify Peta’s comment, yes, I’d say put posters like this on stations from Frankston to Newport; not necessarily other places on the network — not until those also got upgraded frequencies.

5 replies on “Pondering: Why aren’t MetroTrains promoting the hell out of their ten minute services?”

Better put a ‘c’ on that on that. Quite good. Coincidently I took a photo of a tram promotion poster. It will go up tonight.

I was always confused by that Mont Albert Poster. Are they trying to get more people to get off there rather than Box Hill, because it’s the last zone 1 station?

Would be good to get an official word from Metro to why this is?

I can’t imagine how they would lie about it, there must be some sort of explanation that hasn’t clicked?

I’ve never seen these posters but why would you @ Werribee Station? Well they could say, every 20-30 min you could get a train to Frankston

Why don’t they promote it? Maybe because it will make the rest of the network look bad in comparison, and not without reason :-)