Last Friday MX ran a story about Metro plans to shut down its SMS text alert service, in favour of pushing people towards the mobile web site and Twitter. This was sparked by an ad earlier in the week in MX, station posters, and an email sent to SMS subscribers, all encouraging people to “say goodbye to SMS messages that fill up your inbox and hello to the Metro mobile web site.” 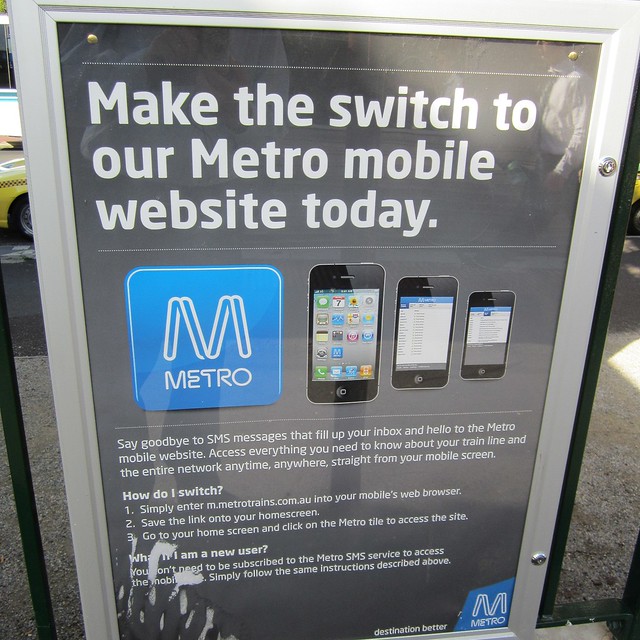 On Monday, in a followup story, Metro denied they were shutting down SMS.

Interestingly, they said people “preferred real-time information, not possible via SMS but available on Metro’s mobile site“. A surprising argument, given it appears (from the outside) that both get updated generally simultaneously.

Now, I like Metro’s mobile web site… it’s great for seeing the state of the trains, and (unlike the Twitter feed) it includes individual service cancellations and delays. I certainly recommend people have it in their phone. It’s particularly useful when travelling on different lines and at different times than you have set up for SMS alerts.

But you have to go and look at it, and it’s only “real-time” if you happen to be looking at it when something happens.

In contrast, the SMS alerts tell you that something’s happening, and although some people have complained of the late delivery of alerts (which could be Metro sending them late, or issues with phone providers), I think most of them to get to my phone in a timely manner.

How timely are Metro SMS alerts?

As it happens, I have a lot of SMS alerts from the past few months in my phone. I’m not sure why, but I haven’t deleted them since July. So I thought I’d do a quick check of the time of the train being cancelled vs the time the message arrived. (The “arrival” time appears to be the time the message was received by my phone provider for me, or perhaps the time it was sent, as some times appear early in the morning when I know my phone wasn’t on.)

Leaving out alerts that are less time specific (eg general delays to services), my sample is 50 messages over 2 months (early-July to early-September) covering the alerts I’m subscribed to, which is morning trains from Bentleigh into the city, and evening trains going the other way.

Of the 50 messages, 35 were cancellations, 3 were “will now run” (eg negating an earlier cancellation) and 12 were about Loop trains altered to run direct to/from Flinders Street. There were none about delays to individual services (these are normally only sent if the delay is 15 minutes or more.)

Of the 13 received late, 9 were in the afternoon peak, reflecting that some cancellations and alterations are made at the last minute (eg due to a fault found in the loop-facing cab), and my alert is for Flinders Street departures, so there’s often less notice. Headed to the city, Bentleigh is about halfway along the Frankston line, so there’s probably often more time for passengers there to receive alerts.

Of the 13 received late, 8 were loop diversions (a Loop train altered to run direct), and most in the afternoon peak. Doesn’t make it any less annoying of course, if you were waiting in a Loop station to catch a train — some forward notice means you can try and get out of the Loop to Richmond/North Melbourne/Jolimont and pick up your diverted train there. In some cases they’ll make announcements in the stations as well, of course.

There were 13 morning cancellations. None arrived after the departure time at Bentleigh. The median was 104 minutes ahead of the event. The lowest was 31 minutes ahead. (This concerned a 7:31 departure from Bentleigh, which originated at Carrum at 7:02. Those waiting at the first few stops got almost no warning, but they had the option of catching an express scheduled 4 minutes later.)

So while being halfway along the line on the way to the City helps for me, it appears every morning cancellation alert was received before the service was expected to run, sometimes hours before, so people could plan around it.

So my conclusion would have to be that while some SMSs are received too late (and on-time delivery is not guaranteed), most are on received time and provide genuinely useful information about disrupted services.

It’s costing Metro a lot of money of course. SMS alerts have 25,000 subscribers according to Monday’s article. I had heard a figure last year that it was costing them about $50,000 per month to send the alerts, which is a lot.

But it’s a valuable service, and as noted in Friday’s article, the best way for them to cut costs is to reduce cancellations and delays.

11 replies on “How timely are Metro’s SMS alerts? (and SMS vs web)”

I wonder if they want to lower or remove SMS alerts, would smartphone apps with push notifications would be a better alternative than people having to manually check the mobile site?

I must admit I was pretty irate when I first read the email telling me to say goodbye to SMS (thinking, as it implied that the service would be stopping). There is no way I’m going to start checking a website every time I want to catch a train just to make sure trains are running on time. The only time I would usually check the website is if I read something on The Age indicating their might be delays and then I’ll check if my line is affected.

Dave is right, if Metro wants to stop the SMS service, smartphone apps with push notifications are probably the next best thing (but they would still exclude the portion of the population that doesn’t own smart phones [yes there are still lots of them]).

Something akin to Tram Tracker would be great and I’ve heard its in the works, however if its Metlink in charge I don’t hold much hope for it ever getting released considering the Melbourne Public Transport Map has been ‘coming soon’ / ‘in development’ since about 2006.

I use a $30 prepaid sim, and it costs an awful lot of credit to access mobile websites. If Metro shuts down its SMS service, I’ll be left completely clueless. It’s annoying how so many companies think that everyone has easy access to mobile Internet.

The SMS service seems better now than it has been for a long time, generally more timely and relevant, less spammy. I still get random texts that don’t seem to match my line or time settings, or the woefully late messages that you wish you’d received an hour earlier.

I check for messages as soon as I get up so I know if my usual train from Mordy to Richmond is running. The two either side of my express have each been cancelled once this week and in both cases the SMS was received well in advance, so it can work well. There’s been plenty of times in the past when I’ve got to the station and had cancellations without SMS though, but as I said, it seems to be better at the moment.

Daniel, do you know if there are any plans for a TrainTracker app? I don’t see why they can’t make a replica of TramTracker, but with (obviously) use for trains. It seems like such a simple idea, and it would vastly improve passengers’ experience with the train network.

@Dave, the down side of apps is they have to be written for each platform, and there are still plenty of phones out there that wouldn’t support them.

@Louise, yes something’s in the works for trains and also buses. It is a simple idea, yes … unfortunately not so simple to implement (or so I’m told)!

The messages can be rather erratic. My usual trip is listed as Laburnum – City in the AM peak, and returning in the PM shoulder peak. For some reason today I got a message informing me of delays up to 15 minutes for Upfield line trains citybound, due to an ill passenger.

Any time part of the line is suspended it goes nuts sending out messages too, like the other week when it sent me about 5 messages informing me there were no trains running between Mooroolbark & Lilydale, then informing me to make my own way to Mooroolbark to board a train if possible, then that replacement buses had been ordered, then that trains had resumed. Kinda doesn’t effect me.

Well here’s something else for the debate.

I just received an SMS informing me of a train fault at Jolimont with delays of up to 20 minutes. As a workmate was about to catch a train that direction I checked the website for more information. Apparently the line was running fine!

5 minutes later the website informed me of the delay.

Having worked on some of the systems that detect trains on the Melbourne network I can tell you that the Train Tracker idea isn’t that difficult – most of the infrastructure is in-place – but will cost money for the time to develop it…and Metro aren’t interested in paying.

I swear in the Connex days it used to do this…

I doubt there will be a decommissioning of the SMS service yet. Whilst there are a lot of Smartphones around, there are a lot of old school phones as well. The new website doesn’t seem to work on old school phones (including my Nokia Classic something or other) and is advertised as being for Smartphones. I suspect they are hoping to save money by diverting some of the SMS people, but I suspect that if they discontinue SMS’s soon, they will annoy a lot of people which could be a bit of a problem given they currently seem to be doing their fair share of that already…