Alas, the day came to depart Brisbane and head back home.

Perhaps it’s inevitable these days that travelling interstate pretty much requires setting aside most or all of the day just for the journey. I suppose it’s a consequence of modern air travel, which requires getting to and from airports, and lengthy check-in times. (Plus my preference for flights at civilised times such as 11am!)

After checking-out (and verifying that a hole in the wall in one of the bedrooms wouldn’t be a problem — it was caused by a bed on rollers in a tiled room, with nothing to stop it moving around) we headed down to Central station to catch the airport train. 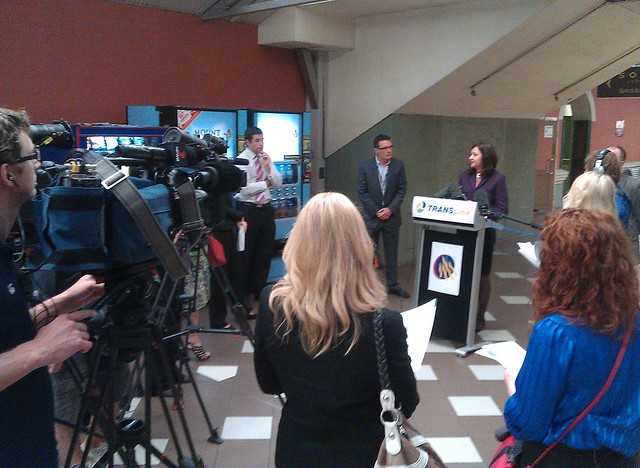 I’d had a message from the Queensland PTUA-equivalent Rail Back On Track’s Robert Dow early in the morning to say there was going to be a ministerial announcement at Central, at 10am, about the time we’d be heading out. When we got there, we quickly spotted the media pack, and Queensland’s Transport Minister Annastacia Palaszczuk, who was announcing that the airport train is to have its hours extended, from the current time of 8pm (which is hardly satisfactory given flights continue for some time after that), to 10pm — starting in December.

After the Minister did her grabs, Robert fronted the cameras to make some approving remarks. He then grabbed me and introduced me to the Minister as his Melbourne equivalent, and we had a quick chat… I told her Melbourne could learn a lot from Brisbane’s public transport network, and the only major problems we’d had during our visit was the low frequencies of trains at off-peak times, which she seemed to agree with.

Robert also introduced me to some Translink people, and I asked them about the bus/train coordination we’d seen the day before. I asked if it was the Translink governance structure that makes this possible, eg how the Translink organisation works with the individual operator companies such as, in this case, Queensland Rail and Surfside Buslines. They said yes — the operators write timetables within Translink’s guidelines.

Rail is done first, then bus timetables are written to match. They see it as really important given 30 minute train frequencies outside peak. This is something Melbourne definitely needs to learn from, and the hope is that the Coalition Government’s planned Public Transport Development Authority will do here what Translink is doing in Brisbane.

After a bit of a chat, we headed down to the platforms for our train to the airport, and made our way to the Domestic terminal to check-in.

Not so fast, said the check-in kiosk machine thingy — we’d need to go and see a human. Uh oh, this couldn’t be good.

It wasn’t. The human told us that a late-arriving international flight had caused the middayish Brisbane to Melbourne flight we’d booked to overflow, and we’d either have to fly via Canberra (arriving in Melbourne around 6pm) or get onto the next direct flight with seats, which wasn’t leaving until about 8pm — which allowing for two hours flight time, and an hour to adjust for daylight saving, would have meant getting back to Melbourne at about 11pm.

Blargh. Canberra it was then. Didn’t Jerry Seinfeld do a standup bit on this topic on his TV show? It might have been about hire cars not being available despite having a reservation. I seem to recall that he doubted that the company understood the concept of a reservation. Apparently this escapes Qantas as well.

So we went and waited for the Canberra flight, which turned out to be delayed. I was cursing myself for throwing away the (disposable) water bottles just before we were told of the delay. Damn. Could have refilled them at a water fountain.

While we waited, we heard final boarding calls for a missing group of four passengers for what should have been our flight home. Blargh, we thought — kicked off our plane, and four people who took our seats didn’t even bother to turn up at the gate. 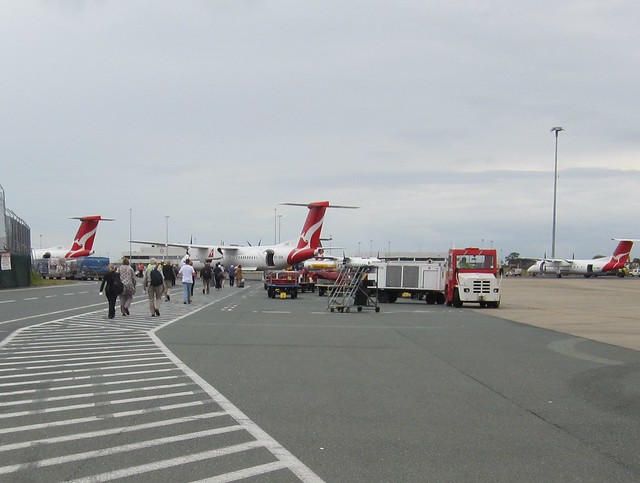 The flight to Canberra was delayed by about an hour, and we went and got some lunch from the food court, at exhorbitant 50% higher airport rates, of course. Then eventually we boarded, with a walk along the tarmac, to our waiting Dash 8 aircraft. I suspect the prospect of a propeller plane made Jeremy a little nervous (or maybe he was bummed about there being no inflight entertainment), but the flight was without incident, and we actually got a decent feed on-board.

I had hoped that it would have been clear enough to see some of our nation’s capital as we flew in, but there was a lot of low-level cloud, and nothing to see except fields close to the runway. We had about an hour to wait before our connecting flight, and thankfully could just mooch about in the terminal without having to worry about the luggage, which had been checked straight through. I found and purchased a Mad magazine compilation of sci-fi spoofs for the boys to read on the next plane. 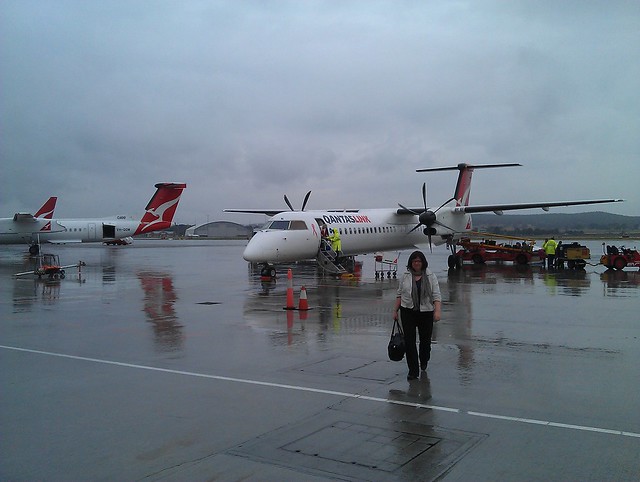 Boarding again at about 4:30, we found this time the plane was full of suited businessmen and public servants (I assume) heading out of Canberra. Almost all of them appeared to have those cases which are effectively luggage, but which are allowed as carry-on, resulting in the overhead lockers being absolutely packed to the gills. No doubt they all do it to avoid having to avoid the hassle and delays of checked luggage, but I wonder if it adds to the boarding times.

Some in-flight delays resulted in us arriving a bit after 6pm, and we found the luggage (only after Jeremy found the right conveyor, which was behind some hoarding) and boarded the Skybus.

After one false turn at Southern Cross (seriously, they could make the route from Skybus to/from the suburban trains MUCH easier) we found the platform for our train home. I was just checking the departure board when I heard a shout of “Hey Daniel!” It turned out to be former Public Transport Minister Martin Pakula, on his way home. We chatted on the train for a little while, as far as Flinders Street where he changed. I assume in opposition he doesn’t get the use of a driver and car, so he might actually be on the train more often than when he was the minister.

It was smooth sailing from there; we finally arrived home around 8pm after a long day of travelling.

I can only think what a pleasant trip it would have been on a high speed train.

Well, if you will fly with Qantas… I got much less of the inspired sh*t Qantas comes up with on an everyday basis after going to Virgin Blue. Qantas, and Qantas employees, I don’t care much who’s fault it is, if you can’t resolve this without inconveniencing your customers, you’ll end up without any.

Carry-on bags are getting ridiculous. They need to start weighing some and rejecting. It wouldn’t take many rejections for the word to get around. Although maybe the answer is to do checked luggage better.