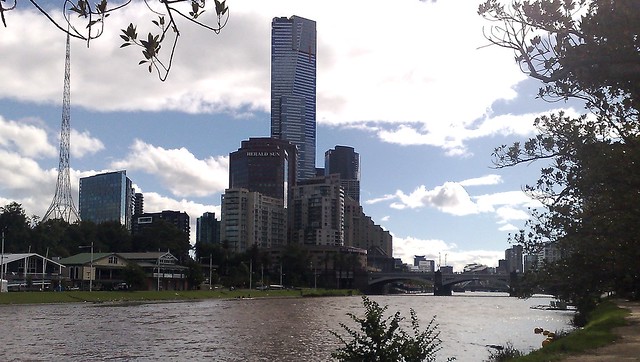 A colleague of mine was incredulous, noting that the trains are packed, there’s litter and graffiti, she’s seen a fight in the street, and rents are stratospheric.

My light-hearted reposte, at least to the last point: you live in St Kilda — what did you expect? In any case, I think Melbourne (at least, most of the bits I frequent) is very liveable.

It’s a legitimate question though — how do they come up with the ratings?

Courtesy of the Herald Sun, who put the report summary on their web site, it’s possible to find out how Melbourne made it to the top:

The catch with any survey of this type is that it’s based on a particular view of things. The EIU notes how it originated: The survey originated as a means of testing whether Human Resource Departments needed to assign a hardship allowance as part of expatriate relocation packages.

No doubt it’s evolved over the years, but I suspect the origin is a key element in the ratings. That is, if you’re an expat relocated to somewhere like Melbourne, you’re probably living and working in the CBD and surrounds, where the streets are (usually) clean and safe, the environs are vibrant, the public transport is good.

It’s a little like the transport experts who come and visit, observe a tram every minute or two along busy streets like Collins and Swanston Streets, and come to the conclusion that the PT system is brilliant.

Thus, the survey result ranked “Quality of public transport” as “Acceptable”. (The rankings available in this category appear to be: Unacceptable, intolerable, tolerable, acceptable.)

It’s quite another story if you’re in the burbs with pathetic PT and no money for a car, finding it difficult to access basic amenities like shops, education and recreational facilities.

Likewise, no local would claim that the educational or healthcare systems in Melbourne were perfect, but to those doing the survey, they ranked 100/100.

We in Melbourne have plenty to be proud of, but we should of course never think we are perfect — in many areas, even those where the EIU says we scored perfectly, there is a lot of room for improvement.

11 replies on “How was Melbourne ranked the Most Liveable City?”

Daniel, a blogger I follow who is NYC based commented recently that when Hurricane Irene was bearing down on the city, and the Mayer made evacuation mandatory in some areas, he also shut down the subway and bus system – which would have made it somewhat difficult for people in some of those areas to evacuate.

I would have thought Melbourne would have been knocked out just for it’s weather.

Seriously I visit Melbourne regularly and don’t see the reasons behind the ranking. It’s a nice enough city but has no real benefits above and beyond the other eastern capitals.

Melbourne is easily the best place that I have lived and I have lived at 13 different addresses in 7 states in the US during my lifetime. It may be easy for a local person who has lived here all of their life to gripe about some of the problems and annoyances we have but they would really appreciate what a great city this is if they lived in places such as Dallas, Texas or Miami, Florida for a while.

While Dallas and Miami are not really bad places to live you do need a car to get anywhere and the downtown/CBD of these cities have little if anything to do other than working in an office building and at night these downtown areas are desolate and even unsafe to be in. The Melbourne CBD on the other hand has plenty to see and do both day and night and I have never felt unsafe here at all.

The vibrant places that Melbourne has such as Chapel St., Acland St., and the markets are entirely missing from most American cities and one does their shopping at boring strip shopping centers and indoor malls that are nearly the same no matter which one you pick to shop at. Nearly all of ones food is bought at the supermarket as the local butcher shops, bakeries and produce shops that are so common in Melbourne are simply not found in most places in the US. The few local independant shops that do exist are usually much more expensive when compared to the supermarket.

While I do think it is quite expensive to live here I do think the extra expense is well worth it to be able to live in and enjoy this wonderful city and never be bored for lack of something interesting to do when I am not working. I agree that access to healthcare is far and away better here than in the US where being properly covered is always a concern even with insurance. The quality of US healthcare is excellent but access to it and the expence of it is poor.

Every city will have some problems and there is perhaps no perfect place to live but Melbourne comes pretty close to perfect for me.

Well compared to other cities I think Melbourne is perfect. Sydney has worse problems than Melbourne. Brisbane is really boring. Adelaide is too small and Perth is the same. Shocked because if Delhi or Shanghai’s metro’s are much bigger and the cities are more populated and they can cope with a rail network. I am sure we can. We just have dopey’s they don’t careless. Those countries like that are more smarted and more economical than us. Pitty.

Only some parts of those countries though.

“vibrant” is a meaningless word which usually marks the user as a twit. You should know better.

But the key thing here is the expat executive issue. There are nice houses to rent, the pollution is OK. Parking is available at reasonable cost in the CBD, traffic is very tolerable by world standards, and its probably not too hard to get your kid into a private school.

One thing that makes Melbourne do great is that its not sydney:)
had to take the swipe…

Regarding the scoring system of 100/100, it might not be that our transport and health systems are perfect, but it could be that they are ranked the best out of the bunch. The scoring system might allocate 100 to the city that fares best in each category and allocates a 1 to the worst? Just a thought..

Thats probably why Finland ranks so badly on education. They are always claiming how good Finland education is. But probably not in Finnish for an expat executive’s kid.

Melbourne is nice a place. But coming to health care – I don’t agree with 100 points there. Understand that qulaity of standard is good. But when it comes to availabilty, it ranks surely less. You get to see hardly any doctor on week ends plus if you get sick on long holidays (For ex: Easter and Christamas) one may have to wait for entire day just to get a basic checkup!!. For me, that is horrible.