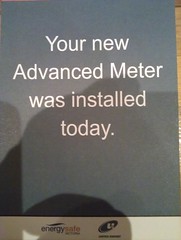 They finally installed a new electricity meter at my house. This was after receiving three sets of letters saying “we’re about to install it”.

It wasn’t one of those much-criticised allegedly-defective Smart Meters though — oh no, it was an Advanced Meter. So much better.

Will be interested to see what effect it has on the next power bill.

I thought Yes, Minister was a comedy but it seems to be in use as a training video doesn’t it.

Our meter is not accessible to us, so we won’t be able to take any ‘energy efficiency actions’.

Had ours for a while now (about 6 months I think). As far as usage goes our bills are pretty much the same as last year (maybe a tad more, but I’ve also got more gadgets). The change itself happened while we were at work and apart from having to reset a few clocks caused no problems at all. Our entire property of 12 units was done in a day.

It is not smart for us. Why can’t I go to a web site and see what my current/past usage is? When am I using the most etc? I think, if I write a nice letter, they will send me (in the post) an analysis! What is this, the 1950s?

Update. It seems there will be in home displays, web portals and smart phone apps to tell you what is on your meter and give you some control if your meter is not easily accessible.

The Wholesalers like SP Ausnet were always calling them AMI Meters from the beginning… The public and Department of Primary Industries chose to call them Smart Meters which they never should have… The meters will have ZigBee turned on once the full roll out is done, WiMax (MESH for CitiPower) is fully working and interval 30 minute data is turned on. It should have no effect on your Power Bill because whether you have an AMI Meter or not your Service Charges are still the same. So even if you haven’t had one installed yet, you’re still paying as if you have one. The only reason some people may have had bills go up is when their old mechanical meter was faulty and they are now noticing the increase cause the new meter is showing what they are really using… some of the old mechanical ones can run slow and inaccurate.