New for June… a Lego house with solar panels on the roof. 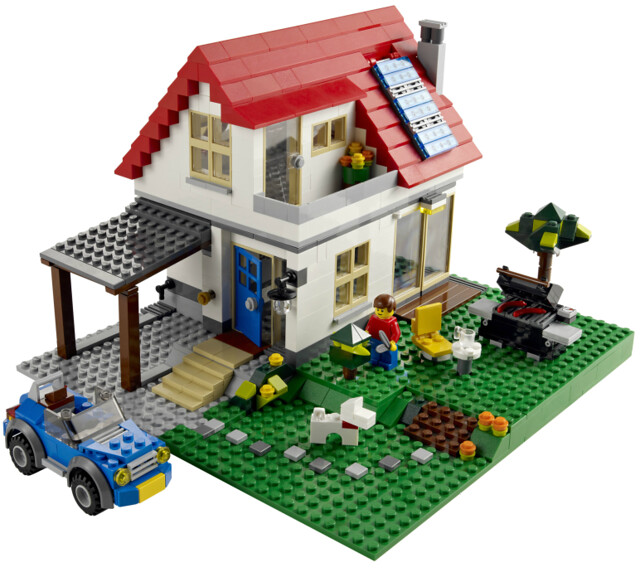 Here’s a few thoughts on the carbon scheme announced yesterday:

1. I simply don’t understand how the deniers can continue to be taken seriously by anybody when the vast majority of climate scientists agree there’s a problem that needs to be fixed.

It also seems a peculiar view that the world’s population can continue to burn fossil fuels in huge amounts with no consequences.

2. It’s true that Australia represents only a small fraction of overall global emissions. But people are are watching, and influence is important. On any issue, people look to those who are leading the world. Here’s a small example: while I’m not even sure I agree with it, it turns out that inner-city Melbourne has been hailed as a world leader in pedestrian-friendly streets. If we have any hope at all of convincing others to do something about reducing emissions, we have to get our house in order.

3. The scheme sounds like a pretty good start. If the modelling is right, it’ll have a minimal effect on the overall economy (0.1% of GDP) while providing a good price signal that big companies in particular need to find better ways of doing things.

4. The Opposition’s view on this doesn’t make sense to me. A plan of direct action? There seems to be agreement from economists that this is less efficient than a pricing scheme:

The main finding of the research is that the experience from these six schemes indicates that a general price on carbon emissions is preferable to specific measures. – markets are generally more efficient in encouraging innovation than direct government intervention. — CPA blog

And wouldn’t direct action be far more like a socialist response than letting market forces figure it out? Interesting quote from Alan Kohler about just who wants what:

For what it’s worth, what I think is that the entire scientific, business, bureaucratic classes – all the serious people – are in favour — Alan Kohler on Twitter

Those against carbon pricing are the Shadow Cabinet (and not even all of them) plus some attention-seekers. That’s all. — Alan Kohler on Twitter

5. There’s some niggles. The Australian Railway Association notes that with petrol exempt and heavy (road) vehicles exempt for some time, railways, which should provide a less carbon-intensive way of moving people and freight, will be disadvantaged by not being exempt. One estimate is that it may push up public transport fares by about 2%.

6. The second niggle (but a political reality) is that the scheme is aimed squarely at the big emitters, and with lots of compensation to individuals, there’s little or no incentive to change personal behaviour. Hence, petrol is exempt (but as Phil Hart from ASPO said at a recent PTUA member meeting, including it wouldn’t have made much of a price difference compared to what will happen when peak oil really kicks in).

7. Personally I’m not sure if I’ll end up ahead or behind in economic terms. The Estimator tool on the government web site told me “The household situation described by the information you have entered is not covered by the scenarios used by this Estimator.” Oh well.

From the looks of it, wealthier people can’t count on the tax changes to get all their costs refunded. But then, they are precisely the people who can afford to cover their roofs in solar panels themselves to cut their electricity and gas costs, and cut their direct emissions and costs that way.

8. Niggles aside, I do think it is important to get the ball rolling on reducing emissions, and it does seem to me that putting a price on pollution sends an important market signal that will get that process underway.

12 replies on “A few thoughts on the carbon scheme”

I think the key reason for Australia to act, despite contributing only circa 1% of global emissions, isn’t so much an instrumental one as a moral one — it’s the right thing to do. We should be keeping our yard ‘clean and tidy’ no matter what others do. Of course, there’s also ‘a good example’ dimension to this too.

As for ARA’s complaint that rail will be taxed but road vehicles won’t, the organisation might care to note that petrol and diesel incur a 38.5 cents/litre excise tax, which electricity generation doesn’t. That’s a much bigger cost burden than the carbon tax. I’m disappointed the ARA, who ultimately stand to benefit from pricing of GHG, couldn’t bring itself to take a positive view of the carbon price.

Direct action is a misnomer; the reality is that the various levels of government could have made different regulatory decisions that would have benefitted us without costing us a fortune.

For example, when the 30 year renewal for Hazelwood came up at the end of its original design lifetime, it should have not been signed, saving us 25% of our CO2 output in fell stroke as well as saving us billions in “compensation” we’re now going to have to pay a multi-national for them to go away. The reality is that because electrical power plants take so long to say “go” to the day they’re running, no politician will do the long term thinking because they cannot be there to cut the ribbon. Cynical, yes, but real politick for sure. End result? We cannot turn off Hazelwood, because even if we said “build a renewable replacement base load generation capability comparable to Hazelwood now”, it’s not going to be ready until 2020 or later.

Market based solutions like the EU cap and trade scheme, NEMMCO and the California electricity market have failed to make real reforms, and have made super profits for bankers and those with no skin in the game. They have resulted in an underinvestment in new technology. Nearly all gains in EU have been attributable to direct action mechanisms, such as taxing fuel, and making it cheap to register cars with < 100 gm/km CO2. Coupled with the diddling of an ENTIRE country's carbon credits, the free for all carbon credit give aways, the system is neither market based nor outcome driven.

Our carbon price makes no price pain for 80% of families and industries to choose cleaner options. They can continue on polluting as before. This is stupid. Worst still, is that the compensation package in year 1 will cost us more than buying several geothermal or solar plants that could have taken the place of Hazelwood, and we get nothing for burning that few billion to people who will barely notice the tax reduction.

This is a stupid mechanism. I'm a hard core greenie in many ways (smallest car you can buy, PT user, minimial trips, use little water for family size, etc), but this is a way to shuffle money from the rest of us to the financial industry and does not do anything substantive to accelerate the removal of our worst polluters or subsidize things for the public good, like a national high speed train network to replace flights, mandate work at home policies to be part of the minimum work conditions, or build reneweable or nuclear power plants to replace coal. Which we will have to do sooner than later.

And we'll pay for that, carbon price or not. This scheme is in the pattern of previously failed schemes. It'll fail in its objectives too. Let's go make money.

On point number 6. With gas and electricity rates going up there will be more of an incentive to use less than there is without a carbon tax.

I’d love to know whether it’s possible for electric trams and trains to incorporate solar panels in it’s roof structure so they use solar power, and maybe even add power back to the grid. How many square meters are available in our trams/trains and how much energy could they be producing?

In a few years, entitlements to burn coal will be created not by reducing emissions in Australia, but by paying billions to the Russian Mafia for “permits” which they will be happy to mint for fools in unlimited quantities. And the Singaporeans and others who control our essential utilities now will be happy to pay them, because they can pass the cost on to you.
If you want to be beholden to the Russian Mafia for the right to breathe, go right ahead.

“How many square meters are available in our trams/trains and how much energy could they be producing?”

There are a few issues I’ve been seeing over the last few months, I think there are a lot of Australians out there who believe there is a problem but are happy to ignore it, they just want to get on with their lives and don’t care about environmental issues.

As far as Australia doing more than other emitters, when the world decided to discontinue chlorofluorocarbon usage because the gases were depleting the Ozone layer we could have said that Aus only produces and uses a small quantity and our action would have a negligible impact therefore we should be exempt?

The cost issue and the scare campaign show how easily many ppl can be manipulated, I know there is a cost involved and some ppl will be impacted but the amount of garbage I’ve heard from ppl who most would consider to be well off surprised me. Most of our necessities including fuel and electricity are very cheap in Aus, and compared with wages are cheaper than they were 20 years ago IMO.

I hate to say it but “when I was young” everyone was conscientious about not wasting electricity, water or food, now most ppl don’t care as it’s all cheap and disposable, I think we need to take a step back to a time before ppl started acting so spoilt.

Excellent summary Daniel. I agree with you on every point.

Alan, your comment is also spot on. This is as much a global equity issue as is it an environmental issue.

Jackaroo, my slightly informed guess is that decking the roofs of the buses/trains/trams wouldn’t be the most efficient use of the solar panels, you’d be adding weight, increasing maintenance/cleaning requirements and you certainly wouldn’t be powering the trains. You’d also have a considerable initial cost to do this.

However a well maintained solar panel can last 40 years, and as the article points out, these are placed in dead space that can’t be used for any better purpose.

If the panels were on the trains themselves, I’d guess the lifetime of the panels would be greatly reduced alongside their efficiency from the constant movement, dust, grime, etc.

Thanks for your input. I have to say I am a bit naive when it comes to solar energy production and use. It is something I need to become more informed about. I was always under the impression that every bit of renewable energy helps, but can see that from a cost benefit analysis, perhaps not.
I wonder if Solar Panels on Train Station Roofs could help produce some energy for the network? Even if it’s for the building infrastructure, platform lighting, PA system, etc? That would reduce Metro’s carbon footprint, surely?

“that every bit of renewable energy helps.”

I don’t disagree with that statement, but some renewable energy projects help a lot more than others for similar costs. If it was a choice between decking the roofs of the trains, or the stations I’d say put them on the stations.

I don’t disagree sufficiently to want to oppose it, and in some respects I support it. EG, to the extent of contributing to getup’s advertising. (I like the position of being sceptical, but loathe some of the bedfellows there)