Here’s the good news: the October 2010 Metro Load Standards Survey (released to the Greens under FOI) shows that overcrowding has dropped markedly.

Measured in terms of (deep breath) Rolling Hour Average Loads Above Desired Standards, the number of breaches has dropped from 38 in October 2007 to 6 in October 2010. 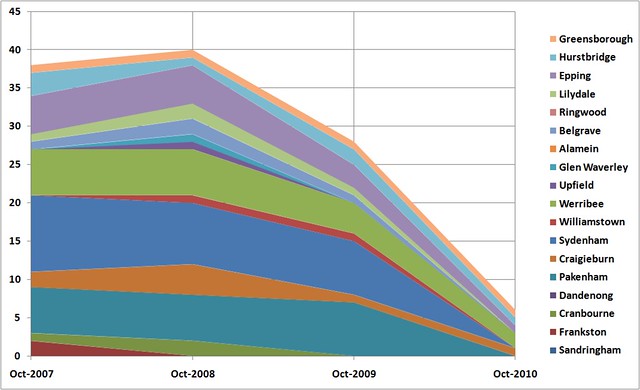 Part of this has been through putting on more frequent services, particularly at peak times, which is now possible given the train fleet is now expanding (about half of the order for 38 trains is now in service), and maintenance practices have changed which means there are more trains available. Other crowding has been fixed by running six-car trains at off-peak times where before they ran three-car trains.

Why has this happened? Because after years, decades of neglect, there’s finally investment in the rail network. An order for 10 trains in 2007 was expanded to 18, then to 38, and now to 45. Why? I think a key reason is political pressure brought about by extreme embarrassment from prolonged media coverage.

Of course, despite the progress, there’s still bad crowding at times. The surveys try to filter out the problems due to cancellations and excessive late-running (which is fair enough — the data is being gathered specifically to plan new timetables, not just to count sardines). As The Age noted, a number of trains had loads in excess of 1000 (the “target” is 798). The most crowded train was the 8:08am from Sandringham to the city, with a very squishy 1017 people aboard, and second was the 5:14pm from the City to Werribee, with 1007.

The major problems remaining in peak are on the Epping and Hurstbridge lines. They got no extra services in the May timetable change, but should get some when a re-write of their timetables happens late this year or early next to coincide with the opening of the South Morang extension.

Off-peak problems were on the Craigieburn and Werribee lines. I’ve checked the detail and in both cases they were in the evenings, when short trains were running. That should be fixed by the May change to run long trains after evening peak.

And even once the crowding is fixed, they’ve got to stay on top of it by ensuring the system is reliable (keeping cancellations and delays down) and continues to expand to meet demand.

Crowding is only one problem on the network of course. Door-to-door travel time (and competitiveness with the car) is another key one which has to be addressed, and encompasses frequency (still substandard at most times on most lines), interchange times, and of course the quality of connecting bus and tram services, which in most areas, are in dire need of attention.

8 replies on “Are the trains getting less crowded?”

I’ve seen no evidence that trains are getting less crowded.
BTW, how come the Greens had to use FoI to get this info? It should be publicly available.

If you travel at the height of the peak every day then yeah, you probably won’t see much difference.

@enno, I don’t think it’s so much dodgy, as high-level. If you’ve got widespread overcrowding, it gives a big picture view of where it is, which is important. But eventually you have to get down to the detail of which specific trains at which times are consistently over-crowded, and work out how to fix them.

I think the morning peak trains on the Frankston line have been much better since the timetable change last year where all express trains changed to run direct to Flinders. Before that, I rarely got a seat getting on at Ormond, now I can’t remember the last time I didn’t.

I don’t pay too much attention to evening crowding as I get on at Southern Cross when the train is quite empty and I bury my head in a book. But if I do glance up, I am very, very glad that I no longer travel from Parliament.

I did catch a train over the Easter break and was surprised at how crowded it was.

If I’m reading the graph correctly, then
(1) Sandringham line has never had an overcrowding issue.
(2) Overcrowding problems ceased on the Frankston line in Oct 2008.
(3) Cranbourne line overcrowding ended in Oct 2009.

I guess the Greens ask vague questions & get meaningless answers.

What do the graphs look like for PEAK hours am & pm. I suspect once you stop averaging them out over the whole day, then the picture may resemble what the average peak commuter experiences.

@Alisdair, no of course not. This graph shows prolonged overcrowding (eg an hour or more of packed trains). In many cases, there are still shorter (but significant) periods when overcrowding occurs. Like I say, the graph is big-picture; the detail needs to be looked at to resolve remaining problems.

I have got a scan of the full report which lists other trains above 798… if I get the time, I’ll take a proper look at it; it’s probably informative.

Liz, perhaps the Frankston morning peak services from relatively INNER stations (like Ormond) are less crowded, but that’s because us poor sods who come up from the end of the line are crammed into the express trains. I’ve seen people standing from around Edithvale (I’m at Carrum).

The changes in June 2010 have made travel to/from the deep south a nightmare. To get to/from Flagstaff I’m forced to change at Richmond – frequently dashing to another platform – and cram onto over-crowded loop trains. It’s not uncommon NOT to be able to get on a loop train. It’s becoming more and more difficult to get a seat on an evening express at Richmond. Few of us could endure stopping all stations to the end of the line. As a fellow traveller remarked, “You just about lose the will to live!”

And in case Frankston-bound passengers DO decide to go with the ultimate boredom of stopping all stations to get home, there’s now more than a few evening peak services that terminate at Carrum or Mordialloc.

And of course the express trains seem to keep getting stuck behind slow trains between Richmond & Caulfield. Frustrating to see the Pakenham line express loop trains rocketing past at a great rate of knots. Wonder what they did to receive such preferential treatment?

Seems to me the long-haul Frankston line travellers have been shafted in favour of (a) those from inner stations and (b) those using the Pakenham/Cranbourne lines.

I’ve registered protests with everyone I can think of, but only receive fatuous replies along the lines of “It’s for the greater good”.

There, I feel better now …