With the usual media coverage of petrol price rises over Easter (yes, that’s how the market economy works… when demand goes up, so do prices…), I was pondering how much money I’ve been spending on petrol.

The car barely goes anywhere on weekdays, and even on the weekends I’m doing perhaps around 50 kilometres.

Given I never pay cash at petrol stations, I had a quick skim through my credit card history to see how often I fill up. And the answer is that the median number of days between fills is 27.5 days. (Usually I don’t bother going in unless the tank is under about 15% full.)

Sometimes it’ll be as short as a week or so between petrol visits — such as over the Christmas period when there’s often a trip or two up to the country. But at other times I’ll go as much as 42 days between refills. 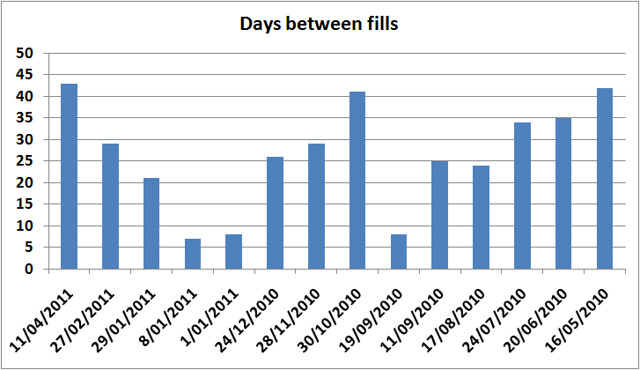 But I’m lucky enough that most of the time, I simply don’t use much petrol, because most of my trips each week are either on foot or on PT.

Be nice if more people had that option.

4 replies on “By my calculations, I fill up my car with petrol every 27.5 days”

Do you drive a car or ride a lunar cycle?

If you’ve got an Android phone I highly recommend the app ‘aCar’. Great for keeping track of car expenses and can give you these sort of stats very quickly. There is a free version in the market place to try out.

So you drive 50 ks on the weekend and fill up every 4 weeks ? Thats like 200 ks a tankfull ? I’d be checking if your car has a leak.
I filled my car up 2 weeks ago, drove a whopping 3 km in the last two weeks ( once to the supermarket and back ), and its now only half full. I don’t know where it all goes. Use it or lose it, I guess.