So it’s ridiculous that it doesn’t have full time bus lanes.

But it’s doubly ridiculous that outside peak times, they’ve set it up to allow cars to park in the bus stops, including right in front of the bus shelters (which appears to discourage their use). 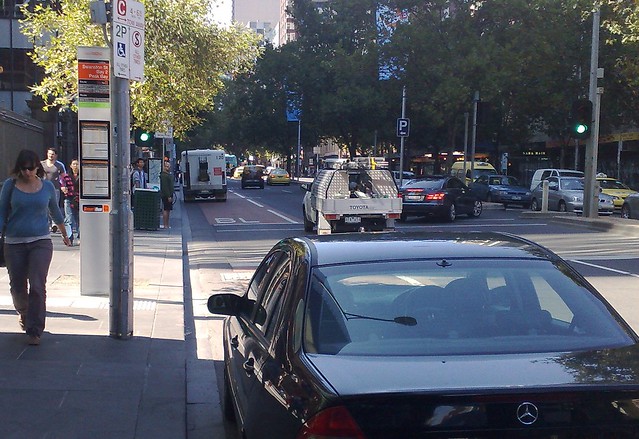 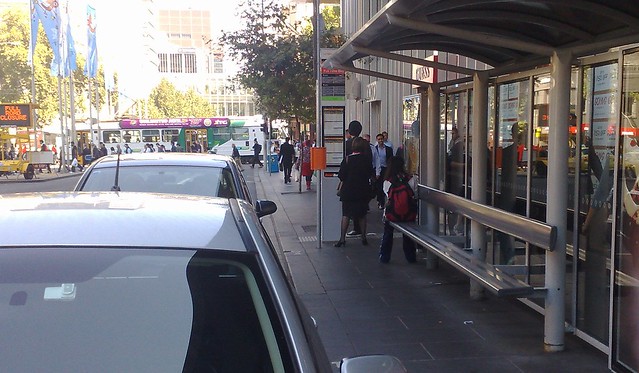 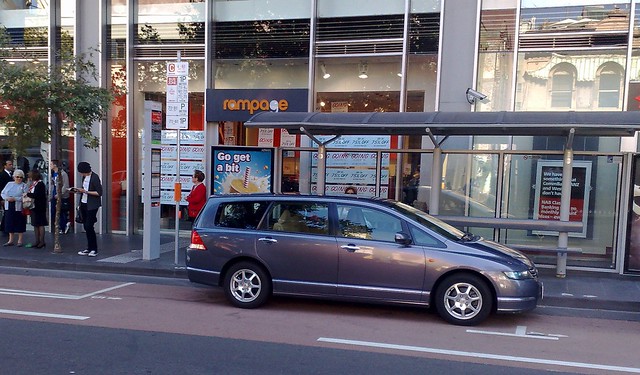 Way to rub people’s noses in it while they wait for a bus.

Yes, ridiculous situation. Do you think it’s deliberate or a stuff up?

I thought I knew all the road rules, and I thought it wasn’t possible to use a parking sign to overrule a statutory ban on parking 20 m before and 10 m after a bus stop sign. But it seems I was wrong.

Philip – whatever the legalities and priorities of jurisdictions, I know if someone got a ticket for parking in accordance with the signs they’d have all the grounds necessary with which to successfully dispute the charge. The driver would walk away, and leave the various jurisdictions to fight out the territorial subtleties.

So, in practice, it is “possible”. The question here is whether it is “sensible” to put such signs in this spot. Even more so if the actual intention is that the bus stop is not a parking space, despite appearances and implications of the signage.

I think the Melbourne City council must be addicted to parking income. It’s equally ridiculous that parking is allowed on some of the “little” streets. Little Lonsdale has just about the narrowest footpaths I’ve ever seen and yet parking is allowed on BOTH sides in some areas, which means not only do you have to contend with a narrow footpath but every 3 metres you have to do a little dance to avoid the parking meters.

Certainly in Sydney there would not be parking is such places. Is the 605 running along Lonsdale another recent change?

@Roger, I don’t think someone paints all those new lines (on top of the red bus lane markings) and puts signs up accidentally.

@Andrew, the 605 moved to Lonsdale Street (eastbound; it’s a clockwise loop) perhaps 8-9 years ago I would guess.

Don’t be silly Daniel. No one uses buses in Melbourne, there’s no need to cater for them!

It’s even better when a van parks there and the bus driver doesn’t see you, so he just drives right on past. It’s quite ridiculous.

anyone know what on earth they are doing between Elizabeth and Swanston? all those concrete foundation things in the median, and now it looks like they have moved the right turning lane for westbound cars to access the shopping centre car park (it used to be “in” the median) so that now this turn lane is in place of one of the two existing eastbound lanes leaving one regular lane and the bus lane… who wants to bet on the bus lane remaining a bus lane with only one lane for our precious private motors?

all jokes aside regarding Julian’s comment, but why do so many buses run into the city anyway? surely direct to city access is not the bus’s forte? I think I would rather a shorter bus ride to the nearest rail station than the “convenience” of riding a single vehicle all the way into town…

Daniel, how many of the routes listed above would become “surplus to requirements” if a heavy rail line were built to the Doncaster area? Most of the ones I can think of head out that way, I tried to find out about more, but there is a disturbing lack of information available about the bus “network” short of looking up specific routes individually…

why is there no map? sure journey planner is useful sometimes, but it shouldn’t be the best way to find out which bus to catch… not everyone has access to a PC or smart(ish) phone… and the first two options are all but useless IMO, especially to visitors from out of town…

I’ve been asking Metlink this question about twice a year since 2006.

The crux of it seems to be that rather than just giving the public a map that serves the main purpose of a PT map (i.e. visualise different routes and see roughly where they go and where they meet up), Metlink seem to have been sold on creating a very complicated and detailed map that integrates with the journey planner.

Whilst this would be cool, and is probably worth aiming for eventually. A regular map would have been nice to be able to see over the past 5 years or so.

There do not appear to be a maps of where the buses go from Doncaster shoppingtown, at any of the stops for the local buses at the shoppingtown. Seriously – last time I was there, the route maps for the 903 ring bus were at their stops, but goodness only knows where the other ones go, or how to get anywhere in the local area. Way to get people to use them.

(I mention this because there is not only a lack of overall maps of the network, or maps of where buses go in local areas that would help people in the areas at the time, but even of maps of the ACTUAL ROUTES THEMSELVES.)

[…] Hmmm, is @bustration simply unlucky? Perhaps she’s just a glass half-full sort of a person? Or are her observations highly suggestive evidence that there’s a very serious problem with enforcing the rules on priority lanes? It’s odd how as a society we’ll spend billions in capital expenditure but then skint on making sure it can deliver to specification. […]