So, the new Samsung TV is a couple of months old now. (The purchase / First impressions).

The picture really is excellent, though occasionally when it’s windy it seems like the old antenna isn’t handling the digital picture well, so the odd digital glitch occurs. Might look at an antenna upgrade. (Actually I still have a good one in the shed from my old rental place. I wonder if it’s worth trying to resurrect it.) 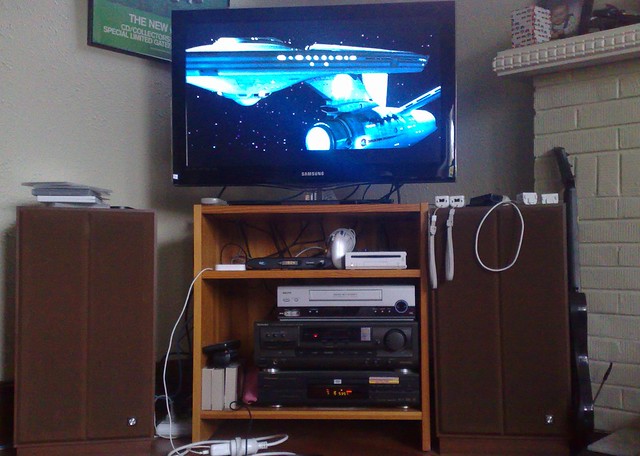 It’s got enough sockets in the back that it can handle everything we’ve got plugged into it: Wii (via component), ancient (10 years) but reliable DVD player (component), Set Top Box/Personal Video Recorder (HDMI), VCR (RCA), antenna in (via the PVR), LAN.

And it plays video files via USB — very VERY handy. It seems to play everything I try, including WMV files such as those downloadable from the ABC for shows such as Mediawatch, which from what I’ve seen don’t play on a lot of other devices. The little USB media player I have no longer gets used — it’s become the one I take to Marita’s house to watch videos from USB.

The [email protected] feature is interesting. Some of the applets are pretty dull, but the Bigpond TV one gives you effectively a bunch of extra channels via the Net (the girl in Retravision was wrong; it’ll happily work via a LAN cable plugged into the router, without buying the wireless dongle). The channels include a bunch of sports ones, but also Bigpond News, which is a rebadged Sky News. Very nifty, and clear as normal digital channels, though who knows how much bandwidth they burn up.

Apparently an ABC iView applet is due to be released sometime in the first half of this year (and is currently in testing). Definitely looking forward to that (and hopefully it’ll connect to servers within the iiNet Freezone, and similarly unmetered for other ISPs).

Once you have a widescreen TV, it’s striking how much American material isn’t in widescreen — in contrast to Australian material, and that sourced from Europe. Almost all US news footage, for instance, appears to be still 4:3. Perhaps it’s like metric… theoretically they can do it, but in practice, they refuse to change? (Or is it the whole of North America which is resisting?)

The TV has plenty of settings to fiddle with, and they are specific to each source — so for example when we switch to looking at the Wii, it’s permanently in Game mode (reducing the lag between the controller and the screen to something almost but not quite as responsive as the old CRT). The VCR is permanently in 4:3 mode. The DVD can be set in 4:3 for older, non 16:9 discs (the DVD player appears not to be able to do this by itself).

So all in all I’m still happy with the purchase.

There are just a couple of minor niggles:

(Re: the photo, at some stage I should replace the horrible brown speakers, but there are other things afoot in the household budget.)

RE: The US and widescreen, instead of getting SD widescreen like Aus and Europe, in North America it is basically (although there are exceptions) HD 16:9 Widescreen, or crappy 480i 4:3 SD

Living in Canada and recently visiting home (Melbourne) it was amazing that almost every channel on Foxtel is Widescreen SD, whereas on Pay TV here you need to get HD for widescreen, and many many channels aren’t available in HD. So for shows sourced in HD but shown on a channel that is SD only they letterbox, which results in nice big black bars all over the place. Thankfully they put a zoom button on the remote, which means you fill your beautiful widescreen HD LCD with 300ish lines (letterboxes 480i) of garbage!

Sorry for the rant!!

Wow, you have the same DVD player and old receiver my in-laws have.

Ours being a Samsung, I suppose it is the same with program information, but we watch it through the pvr and hence get the the info.

Star Trek on the screen??? Coming from a household of Star Wars fanatics (husband and daughter) I feel very conflicted :)

Hehe, the first thing I noticed in that photo was the lovely brown speakers!

Tell me, when you say you can view videos from a USB, does it have to be a flash drive, or can it be a huge powered hard drive? I bought a DVD player that will play just about anything via USB, as long as it’s on a flash drive! D’oh!

@Liz, it can be a flash drive or a powered hard drive — both seem to work okay.

It also has the ability to play stuff over the LAN from a network share, but I haven’t yet figured out exactly how that works.

Judging by the patchwork repairs on the secondary hull, I presume you were watching Star Trek III: The Search for Spock.

Let me have a guess- the scene on the screen, judging from the battle scars on the Enterprise, would either be from Star Trek II: The Wrath of Khan, or Star Trek VI: The Undiscovered Country, am I right?

@ Kath, can’t stand Star Wars- nothing more than a billion dollar toy ad! At least Trek has some substance and something for all!

Andrew V’s got it — it was from Star Trek II, towards the end.

Sorry, Daniel, but the picture screams “Man Cave of Nerd” (not saying that *my* room looks any different to this)

hey the website i put is actually an Australian indie TV production i would like you guys to give coverage to. their cast is a good Aussie cast with one Brit in there too, and the teaser they have released looks soooooooooo interesting compared to what’s on TV atm. anyway i love you blog and would love to see this get some coverage (yes i know the people involved) – seriously take a look – oh and they have a party on the 31st as a fundraiser with media welcome. go Aussie tv!

Hey, glad you are liking the teev
remember to get the wifi dongle asap, as once its becomes a deleted its GONE, even if using LAN now.

There are just a couple of minor niggles:
■Changing channels doesn’t show the current programme information, unlike on many digital televisions and STBs. You have to press the Info button to do this. Seriously Samsung, why not make automatic showing of the Info information an option? Apparently this is a well-known criticism. Do we have to start a Facebook group or something to get it fixed?

■You can’t change the order of the channels: they’re in LCN order, but with alpha sorting, not numeric. This means if you want to put the main channels ahead of their minor cousins, you can’t: so for instance 7 is ahead of 72 (7Two) and 73 (7Mate), but I’m stuck with 90 (Gem) and 99 (Go) ahead of 9. And it’s lucky OneHD is available on LCN 12 (as well as 1), otherwise it’d be a long way from its parent and siblings, 10 and 11. Not a huge issue, really, but again, it’s offered on many other TVs/STBs.

■Oh yeah, one more. The remote works well, but the Power button appears to be designed so it’s a little less sensitive than the others, probably to prevent the TV being switched-on accidentally. I find it a tad irritating that you have to press it that little bit harder.

– use the channel up/down buttons to turn on the tv (vol buttons might work too)
press the ‘light’ button to turn backlit keys off as it kills the batteries. low batteries are worse than ‘unsensitive’ keys
our +1 worked that out @8months old, now is a master (@20months)