For an hour or two yesterday, a number of people with multiple cards on their Myki accounts found that one or more of those cards were registered to Hannah Whiting. 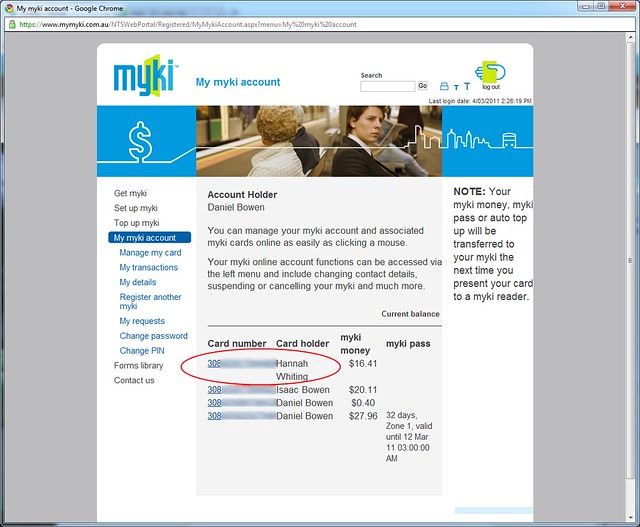 Upon advising the Transport Ticketing Authority of it, they managed to fix it pretty quickly, but it’s not yet clear what caused it.

I wonder if Hannah Whiting is a real person out there somewhere, or just a name in some test data?

The card in question is used by Jeremy, but was incorrectly attached to my name on the web site. His name is on the actual card, and legally he is the cardholder (because the rule is that the first person to use it is deemed the cardholder). It was just the web registration that got a bit messed-up (my fault). It doesn’t really matter, but when I asked it to be changed, I was told it can’t be done.

Well, unless I wanted it changed to Hannah Whiting, apparently.

By the way, I was having an al fresco lunch with some people in Little Collins Street yesterday when Premier Ted Baillieu wandered past (with new media adviser Josephine Cafagna) and said hello, and asked if I had been mean to him (for this Herald Sun article). If I was thinking a bit quicker, I would have asked him if he’d made up his mind on Myki, or how the Public Transport Development Authority is progressing. Oh well.

7 replies on “Yesterday’s Myki stuff-up: Who is Hannah Whiting?”

I noticed in a recent newspaper who his new media adviser is. Interesting.

I’ve swam in the same lane as Ted a number of times when I could be bothered getting up early enough, though I didn’t even realise it was him at first. Doubt I’d have enough guts to ask him anything in that situation ;)

Daniel
the fact that you mucked up your Myki registration is the fault of Myki who have a complicated system and unfriendly website.
Nathan, i use to swim laps with Steve Bracks in the old state swim centre at lunchtime.

One aspect I’m liking of the Myki website is the ability to send a pdf of transaciton history to your email. Great for GST claims (for those of us who have to do such things).
Won’t bore you how accounts decided to handle the accounting of top-ups etc, – quite tricky, and wasted quite a bit of time.

My guess is someone in myki systems support has tried to update the database and stuffed it up (ie. trying to change Hanna’s 2nd card, and forgetting to restrict it to just Hanna’s account – surprisingly easy to do).

I’m amazed at the lack of user-friendliness of this system.

I suspect my card has become faulty in the last two weeks. It’s taking ages to scan on/off at stations (and often on buses), sometimes it doesn’t work at all. The person I spoke to at the Myki call centre agreed that it might be faulty, and then told me of the two insanely unhelpful methods of obtaining a replacement.

One method is to fill in a form, ***including credit card details in case they decide there’s nothing wrong with the card***, send in the form and card and wait for a replacement with my balance transferred.

The other method is to go to one of two CBD locations, obtain a replacement card over the counter but then wait 10 days for credit to be transferred.

Both of these methods involve me buying another ticket in the meantime to keep me going until their idiotic system catches up. Why? When I first signed up and received an incorrectly printed card, they sent a replacement immediately and transferred the credit. It’s as though they’re going out of their way to find new methods of angering the customers.

@Philip, yeah part of the problem with the prolonged rollout is that you can’t just go to your local staffed station and get the card swapped on the spot.