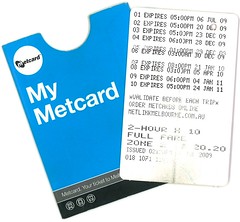 I was an early adopter of Myki, if only to see the problems it’s had first hand.

But since I started using it, I’ve still carried a Metcard in my wallet. The last Metcard. A 10×2 hour zone 2, for my occasional forays into zone 2 — used on days I was only going into zone 2, and only for weekdays (since on weekends there are other, cheaper fares). And with a Barbie design on it.

Edit: Inspection of the card shows it was bought and first used in July 2009.

A few weeks ago I had got down to the last of the ten fares on the card. On Monday I used the last — ironically to go to Vicroads to get my new driver’s licence.

And that, assuming that Myki doesn’t get scrapped and the Metcard system is pulled back from the brink of oblivion, was my last Metcard.

I had intended to film the validation on the trip back, made with the same ticket, but was chatting to an Irish bloke who was trying to get from Vicroads in South Oakleigh to Murrumbeena Station. Poor bloke… a two-bus trip with a terrible connection (which he just missed), and costing him two zones.

And alas the video above doesn’t quite show the full validation process clearly. But it is evident that it takes about two seconds (and regulars will know it sometimes takes a bit more while the machine thinks about it before spitting the card out). Contrast this to (typically, when it’s running well nowadays) about a second for a Myki touch — though it can sometimes be much slower.

(Thanks to a poster on Whirlpool for the idea of marking this occasion.)

7 replies on “The last Metcard”

Congrats on surviving 12 months with Myki. I’m also early adopter.
I’ve still got some metcards/trips unused. Presumably, there will be a phase-out period.

I also had a 10×2 Zone 1 in my wallet during the myki “train only” period which I bought when myki started on trains. I used it a grand total of three times I think on trams when AO’s jumped on and I was too chicken to have a myki confrontation. Once trams came online I gave it to my partner to use.

I did find a bunch of old metcards in my junk draw when I was cleaning it out the other day, chucked em :)

Last Sunday I have finally used up 5 x Weekend Daily Metcard after using it for a year.
I am a weekend traveller, and only occasionally travels on weekdays, so a 5 x Weekend Daily Metcard is the way to go, as it is only $3 a day. The first trip was taken on January 24, 2010, so it was a year to use the Metcard from start to finish.
However, I will still continue to use Metcards in the near future even though I have a myki, and no plans to switch it yet. Also, my myki balance, was always $0 since I bought it as I never put on money.

Pleased that a little bit of history has been recorded, assuming it is history.

I’ve got a virgin 10×2 Zone 2. (which incidently was almost impossible to buy in the city)
About 12 months ago the zones on the 703 bus changed, without notice, and I discovered I was now in the zone 1/2 overlap & never needed to use it. I’m willing to sell it to the highest bidder. (sorry Daniel, I know this isn’t eBay)
It’s not ever been in my wallet, because if it had been the text would have become invisible. I know this because I’ve another metcard in my wallet but I can’t see how many trips remain or which zone it’s for.

@Alasdair, there’s a good chance you’ll be able to get the full value of the ticket back when (and if!) they phase-out Metcard. Past experience (eg when they got rid of Short Trip tickets) is there is generally a refund offer (without the usual $9.80 processing fee) when tickets are withdrawn from sale — and the intent to do this has been flagged (though obviously they’d prefer people use up their old Metcards to save the work).

The only reason why I continue to use metcards is that I dont get penalised if I forget to swipe it at the destination, which I would be if I was using the myki.