For the past year or two, Lego have advertised heavily around Christmas time on billboards and in newspapers. Surprisingly, they don’t direct you to the Lego web site, but say to search for “Santa’s little helper”. 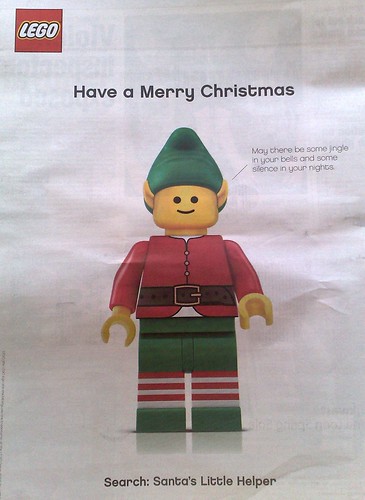 This is tied into their advertising for those keywords on Google, which goes through to their web site with a gift suggestion applet. (For some crazy reason lego.com.au goes to a completely different web site.)

I guess they’re assuming everybody uses Google, not Bing or Yahoo or anything else, where Lego is not a prominent result for those keywords (though Bing suggests it).

Nonetheless, Lego seems to be doing well. An article in last week’s Sunday Age notes that the company faced bankruptcy in 2003, but has bounced back. And I know that when looking around Chadstone on Monday night for Lego for my nephew Leo for Christmas, some of the Lego shelves in Toys R Us, Myer, David Jones, Target and K-Mart were looking a bit empty.

And I’m not going to pretend I didn’t wish I was buying some for myself. (That Lego train set 7938 looks rather good.)

The LEGO Santa is being particularly kind to my six y.o. Julia this Xmas. She’ll be getting at leat two large LEGO sets, including a station that would go nicely with that train set you mention. Hmmm. There’s an idea for next year.

As a Lego fan myself, what’s heartening about the Lego turnaround is that they did it in all the right ways. The company has always focussed on quality materials as its point of differentiation against competing brands with compatible bricks (this is why Lego fits so well and lasts so long). But they also went right back to basics, focussing more on construction-oriented sets and less on gimmicks. The quality of the sets they put out these days is exceptional. It would be good for consumers if the business leaders of tomorrow were to study Lego’s model in business schools.

Good point Stephen; they could have gone downmarket, trading off the name, but moving manufacturing to cheaper countries and dropping quality, like so many established brands before them have. Reputation doesn’t last forever when they do that.

In a poll of 100 top toys for Channel 4 (UK) recently, Lego was voted the best toy of all!

They had to bite the bullet and start offering themed sets and video game crossovers, is going quite well for them.

Also having their own factory in Denmark meant they missed out on the lead contamination scandal that happened with a lot of Chinese produced toys a couple of years back.

There are still places that make wooden toys in Australia and still manage to survive. Not online either, from a shopfront.