Seems the more cynical (especially on the left) are panicking about the new Coalition government in Victoria, including with regard to public transport — trams in particular.

Well no, hold on. Baillieu is not Kennett, this is not 1992, and the economy is not stuffed. There is no mandate nor need to drastically cut government debt, nor cut government spending.

And unlike any time in the last few decades, public transport patronage is increasing, there is public demand for investment, and there is not even the scope nor opportunity for Kennett-style work reforms (such as the mass removal of staff). On the contrary, the Coalition has come in pledging 940 security officers for stations, as well as 40 more trains, and feasibility studies for four new rail lines (Doncaster, Rowville, Tullamarine and Avalon).

Removal of Clearways is anti-tram!

First of all, no Clearways are being removed. Rather, the hours they apply is being rolled back to how they were a couple of years ago. Under Brumby these crept into off-peak business hours, up to 10am in the mornings, and from 3:30pm in the afternoons.

Secondly, there are questionmarks over whether the benefits of Clearways is compelling against the pain suffered by shopping strips — not just removal of parking, but general poor amenity — window shopping and al fresco dining are not very pleasant with cars zooming by at 60 km/h. Parked cars provide a buffer. 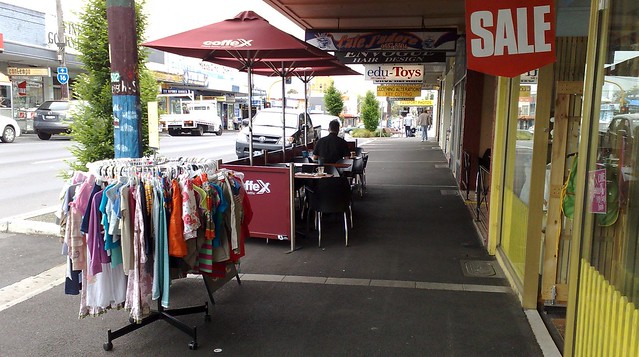 In strip shopping centres with no clearways, such as Centre Road (where widened footpaths physically prevent it) there is activity on the street as early as 8am, with cafe patrons sipping coffees and eating breakfast.

The obvious question must be: are streets just for traffic, or for everybody?

In any case, opinions differ on how much travel time is saved with Clearways. Some tram drivers say there’s a noticeable difference. But the only hard figures that have come out are that on High Street there is saving 5% time for trams, and 9% for cars. So it benefits motorists more than tram passengers. And for trams, that adds up to just 36 seconds along the affected section. (It’s not even clear if this applies to the peak of the peak, or the 9am-10am and 3:30pm-4:30pm periods now rolled-back, when traffic is much lighter. It’s also not clear if it’s in the AM peak direction, which includes a tram-only lane, or in the PM peak direction as well, which has no tram lane.) 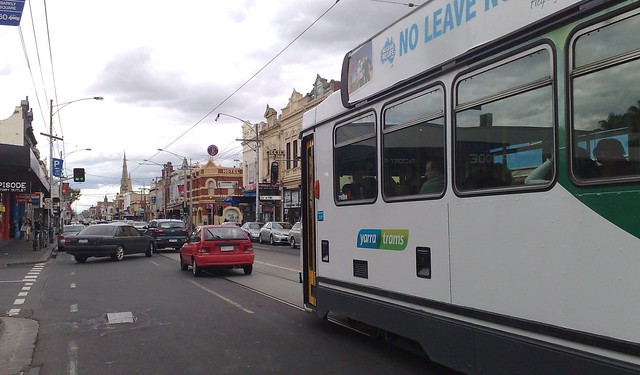 On Sydney Road, where the Clearway is not accompanied by a tram-only lane, a study indicated the time difference for trams was next to nothing: just 7 seconds — with adjoining section along Royal Parade actually being slower, despite it having a dedicated tram lane.

This reflects the fact that most of the delays are at traffic lights; in fact Yarra Trams figures indicate delays at traffic lights account for 17% of travel time across the tram network, much higher than in many other tram cities — including those similar to Melbourne, with older networks running in mixed traffic.

Traffic light priority, if done well, could be highly beneficial to tram users, but barely noticeable to most other people.

Other solutions (particularly relevant for the south end of Sydney Road) would include traffic metering, to reduce the number of cars able to enter the street ahead of the trams (which could easily be carrying 150 cars-worth of passengers), and subtly encourage (but not force) motorists onto other (non-tram) roads.

The Coalition said little about trams (or buses) during the election campaign. Neither did Labor. Let’s face it, trains get most of the publicity. That doesn’t mean it’s time to panic just yet.

Of course, they’ll probably need some nudging, particularly with regards to issues like traffic light priority for trams.

6 replies on “Baillieu and the Clearways”

You correctly point out there are a lot of different road users (plus shop-keepers and cafe dwellers) all competing for the same territory. You could have also mentioned cyclists who too want to use the (left) parking lane. It’s hard to know what solution there is, but I’m glad I’m able to use the train in peak times.

would clearways stop trams from being delayed

Thank God we did get rid of Bracksby and co- 11 years and $11 billion in cost overruns, thank you very much! If anything, they ought to investigate Bracks and Thwaites, and find out why they quit half a year into their third term, and no, I don’t buy the spending more time with the family bit- you wouldn’t have contested the election if that was the case!

And for all of you who knock Kennett- don’t forget how bad a state this state’s economy was in when he took over, thanks to those ratbags Cain and Kirner. Kennett sold of state assets to pay off the debt that those two racked up over 10 years of governance, which helped get Victoria out of the economic doldrums! Had Jeff not done what he did, we’d be what NSW is right now!

In thinking of tram speed improvement and any infrastructure upgrade, I hope the 2032 DDA compliance is being considered. We’re getting close enough now that any infrastructure put in place now may well still be around at that date.

So we really need to open discussions on tram mobility/priority now – eg if trams run in the left lane, do you keep centre-lane parking, abolish it and move it to side streets, keep trams in the current position but bring in the kerb at intersections, ramp up/down the left lane, etc… decisions here will impact tram priority (or otherwise)…
I haven’t seen anything to date on these kind of questions (or at least, not in an integrated way) but would like to hope they’re being considered!

Agreed Dave. There is a little bit of movement on this, for instance along route 86:

Meanwhile I gather DoT are experimenting with different models of accessible tram stop. Not sure where it’s at though; it’d be nice to see some more movement on this.