Among the 12 (or more) seats lost by Labor in Saturday’s election were four in Melbourne’s south: Frankston, Carrum, Mordialloc, and Bentleigh.

What do these have in common? The Frankston line.

The Frankston line is the poorest performing in Melbourne. While overcrowding has eased since the June timetable change, punctuality is the worst in the city. In the past 12 months, just 71.2% of trains arriving within five minutes of the schedule. (Network-wide average 85.1%) 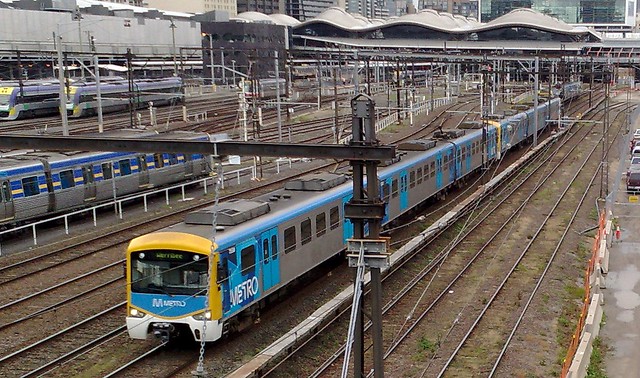 One of the causes of this is the extensive use of Siemens trains on the line. These trains have only two doors per side per carriage, and few handholds along the aisles, which causes passengers to congregate around the doors, slowing loading, particularly at peak times.

More critically, an intermittent brake problem means the trains have a 30 km/h limit when approaching a station stop with a level crossing on the far side. By my count, this affects 6 stations from Frankston going towards the city, and 10 going back towards Frankston. 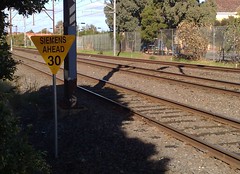 Siemens train brake problems were first reported in 2003, but gained prominence in summer 2006-2007 when a large number of trains were taken out of service because of it. A full solution still hasn’t been found.

The Siemens train problems, combined with the premature scrapping of Hitachi trains as they were introduced, has led to overcrowding and delays.

The Coalition’s David Davis cited the Frankston line as a factor in the swings of bayside seats against the ALP, and one new MP agrees with him:

Ms Wreford says voters in her electorate and the nearby seats of Frankston and Carrum – which also look likely to fall to the Liberals – have had enough of the Frankston railway line which runs through the three bayside electorates. — AAP

“It shows that voters see state governments as service providers.”

The failures in public transport were symbolic of a government that had become ineffectual.

“Any Labor member along the Frankston-Pakenham line was in trouble. That was extraordinary. It was the south-eastern suburbs that did Labor in.”

So we have multiple failures with a specific model of train — and indeed a poor choice of model in the first place. They were chosen by National Express, but would have been approved by the Department of Infrastructure (now Transport). Subsequently there’s the placement of many of those trains on the Frankston line, no solution to the brake problems despite seven years having passed, and continuing disquiet over overcrowding and late-running. (And to be fair on Labor, they had started to turn the latter two problems around.)

Add to that a not-necessarily representative, but very alarming recent security incident (and a general concern over security — see: Stateline 19/11), poor decisions and cost blowouts with the new Myki ticket system, frustration from many over station carparks (caused by infrequent buses that aren’t coordinated with the trains), and it’s no wonder that the Coalition’s message, that they would fix the reliability and security problems, and form a Public Transport Development Authority to better plan, manage and coordinate the system, resonated with voters.

What difference would a PTDA make? If it’s done right, it would be staffed by experts who wouldn’t let an operator buy a bung brand of train, nor let a brake problem go unresolved for years on end, nor scrap old but perfectly functional trains when patronage growth had been predicted. It would have powers to ensure bus/train/tram timetables are coordinated. It would do proactive planning and lobbying for funds, at arms-length from government (eg not subject to excessive interference from the politicians, such as Metro recently found when its etiquette campaign, which if successful would have improved punctuality, was deferred by the Minister’s Office due to the election — see Thursday’s Herald Sun print edition: “Stopping all stations, except for manners”). And it would have proper public involvement and transparency, unlike the secret decisions that currently get made behind closed doors.

I’m sure public transport wasn’t the only factor in Labor losing the election, but the message must be that governments have to get basic services right, or face the consequences.

Let’s hope the Coalition get it right.

14 replies on “Did these trains lose Labor the election?”

Yep. They lost those seats mostly on the trains – note the Frankston Bypass didn’t help them either – and took a bollocking down the end of the Dandenong lines too.

Seymour went over the pipeline issue and the others they were probably always going to lose.

Another thing they absolutely must resolve is the continuation of Frankston services through to Southern Cross in the morning peak. A couple of people I know who aren’t easily enraged, were, when their morning trains terminated at Flinders (or paused there for several minutes) rather than continuing through to Spencer St as advertised.

There’s a package of measures needed to avoid delays: new arrangements for passengers using wheelchairs (lots of options, but the driver having to get out of the cabin and put the ramp down can’t be one of them – eventually staffing all stations but some other solution is needed in the meantime – maybe a booking system?), and a bit more encouragement of Type A behaviour amongst drivers and passengers alike will all help. Also need snipers authorised to take out anyone who holds the doors (none of this warning shot nonsense).

The timing / driver changeover stop at FSS needs to go…

Hopefully a new government without as much accumulated baggage and more ready to take on the unions (before Tom throws a rock at me, I know the union isn’t the cause of all or even of most of the problems, but it is one of the cogs in the machine at the moment).

Maybe if the state government had spent a little less on toll roads and little more on public transport, it wouldn’t have gone so badly. But noooo, they have this obsession with building roads because they think everyone wants to drive but really, everyone has to drive because there’s no alternative.

Sorry Katie, I want to drive- because I can!

Notice most of the seats that Ted won were on the Northern and Southern extremities of a certain toll road? Even though it wasn’t mentioned, looks like Eastlink may have been a key factor in Bracksby’s loss!

Sooner or later the problems would come back to haunt them – spending large sume of money on Myki ($1.35 billion) and the (slightly) fast(er) rail project ($750 million??) over the rail extensions that seem to be overcosted to buggery nowdays and the return of passenger services closed during the Kennett era that never happened, apart from the two done when the country independents had them on a short leash.

Anyone else noticed that the Sunbury electrification is now budgeted at $270 million, around 10 times the cost at the time of the Cranbourne electrification in 1995 (yes I know most of that is single track) – I dont think inflation is that bad!!

Remember, if 71% of trains are on time, than fewer than 71% of passengers are. See here:

Now the big question is, what can we do to make sure the PTDA is done right?

I’m still sitting in a Labor seat so I’ll at least be writing to tell Labor they shouldn’t oppose the legislation for the sake of it.

It would be great if the PTUA were consulted to some extent.

Of the other suburban Lib gains, Burwood, Mitcham, Mount Waverley and Forest Hill are all on (or close to) relatively well-performing train lines (though Alamein is infrequent at peak). I suspect it’s likely that other local (or statewide) issues came into play.

Part of Prahran is on the Frankston/Dandenong line (and part on the Sandringham line, which suffers from overcrowding, but is not too bad punctuality-wise), but I suspect planning (fear of high-rises) and grumpiness over Clearways is a more likely cause of a swing.

Gembrook is on the Pakenham line, which is the second-worst for punctuality, at 72.5%.

@Vaughan, there seems to have been movement on the deployment of staff recently. The Host station staff are now being used more effectively with more announcements and dispatch paddles. A role in loading wheelchairs would surely have to be the next step.

@Andrew S, I reckon on balance the Regional Fast Rail project was a good thing. Apart from the singling of the Bendigo line (which was very shortsighted), it was a big upgrade, and with the new trains and extra services, has led to huge patronage growth for V/Line – so they must be doing something right. It shouldn’t have been marketed as “fast” though (which caused anger with “flagship” express services bypassing some towns), and they really screwed up on the costings (they thought it could be done as a PPP, but it ended up being fully-govt funded. On the bright side that may mean in the longterm it costs less.)

@Julian, you bet. If done right it’ll have huge benefits. If not, it could be a fizzer.

No criticism about rolling stock renewal but the work to do an extra 30km/h was probably not worth it (that work included singling the Bnedigo line), nor was it vital to increasing services.

My guess would be that V/Line patronage would have increased anyway as it has with suburban services.

Not living in Mexico sorry Victoria I’ve only seen a few interviews with candidates before the election and was not surprised to see Liberal candidates criticise the PT network, when the interviewer asked what the Liberals would do to fix the problems the candidate quickly side stepped the issue and would not be drawn to make a statement. I hope you see some improvements but I think getting elected is always number one priority not fixing PT.

Let’s not forget the very significant price drop for V-Line tickets. I would argue this had a huge impact on increase in patronage.

I’m in Edithvale, on the Frankston line. I take the train to and from work in the CBD each day, and I can tell you yes, people on this line are fed up. But it’s not just the timeliness. We’re tired of the trash all over the trains, the mobs of drunk teens starting fights and delaying the train. We pay more for our tickets, living in Zone 2, and we’re basically ignored. Why does the last Express train leave FSS at 6:09?! Really? This is a train sysyem accomodating to 1950’s commuters. The government is encouraging more public transport and varied work times, yet not providing the means in which to make it a reality.

How many times would the local MPs actually have caught the trains?

can you explain why the braking issue causes the siemens trains to slow so much before a station with a level crossing? The boom gates are already down when the train approaches, so if it did overshoot slightly, what is the perceived danger? Surely any type of train could (and I’ve seen happening) overshoot a train station…

@Andrew S, the key thing about RFR was that it was catching up for decades of poor/non-existent maintenance. It brought track conditions back up to the standard to run more reliable services (though of course the metropolitan congestion still plays havoc) and got rid of antiquated signalling equipment.

Oh, apart from singling Bendigo, the other short-sighted thing was not using gauge-convertible concrete sleepers. It would have cost a fraction extra, and concrete sleepers can last something like 70 years…

@Julian, no doubt the 20% price cut helped, along with the other changes. If you boost services, cut waiting times, improve speed, provide brand new trains and cut prices… surprise, more people use it!

@Alasdair, I expect they’re just being cautious. At one stage instead the precaution was to set all level crossings to express mode, so the booms went down earlier. I wonder if there was political pressure to stop doing that due to traffic congestion.