“Particularly during peak period where we know it has been a difficult period, but we’ve had patronage growth in such a short period that no other jurisdiction around Australia has experienced,” [Public Transport Minister Lynne Kosky] said.

“Indeed, I’m not aware of any other location around the world that has had the levels of patronage growth that we’ve had in such a short space of time.” — ABC Online

It’s said that rail patronage has jumped about 40% in three years.

Is it the fastest growth in the world? I’m not sure. I do know that a lot of other public transport networks are getting heavy growth. In Perth, rail patronage has gone up about 300% in the last fifteen years, in no small part due to a rapid expansion of their rail network and fleet.

Last year I spoke to a group of visiting North American PT senior managers, who said not only are they getting big growth, but in some cities they’re suffering from a loss of funding due to the financial crisis, particularly where funding is linked directly to taxation.

Here of course, so far there’s been plenty of transport money to go around, if the government chooses. $1.6 billion on the M1 widening, for a start — a project which is expected to provide less than ten years of relief.

Whether or not we’ve had the most growth is irrelevant. Because the government was warned that this would happen.

To do this, the then Department of Infrastructure prepared reports in 2003 report imaginatively called Train Plan, Bus Plan and Tram Plan. Train Plan specifically forecast strong growth on the rail network, which has so far basically come true. 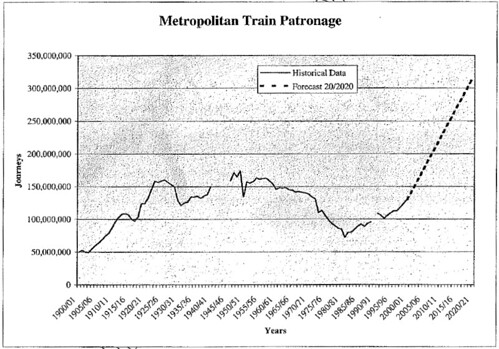 …it is likely that the rollingstock will not be on track until 2010, leaving a substantial amount of unsatisfied growth demand in the years leading up to that time…
— Train Plan, page 76

The government didn’t order the extra 10, and instead waited (though it did buy back some Hitachis). The first new train will arrive in December 2009, with more to follow in 2010. And just as Train Plan had flagged (at least in bureaucratese) the trains are packed.

Train Plan recommended this next order be 64 new trains — of which the government is ordering 38. Bearing in mind that 7 Hitachi trains were kept/bought back, this means by 2012 we will still be 29 trains short of what Train Plan said we should have. 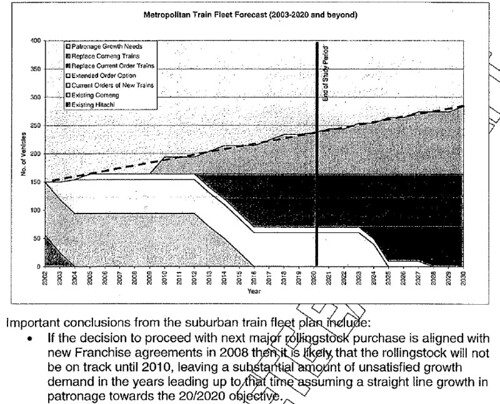 So, when the government claims they were caught out by the patronage growth, the real truth is that they took no notice of their own internal report, and chose instead to keep on pouring money into freeways — around a billion dollars between 2003 and 2007 alone.

Of course, the other point here is that the government had absolutely no intention of achieving its own “20% of trips on PT on 2020” goal, and refused to put the resources in to achieve it — hence Minister Kosky describing it in 2007 as “always aspirational”.

Oh, and before you respond and say “Fine, let’s vote them out in 2010”, take a good look at the opposition, and what their policies are… because so far, they haven’t really said what they’d be doing differently if they were in power.

When I declare I’ll vote them out, I never said vote-in the Coalition (who, as they stand currently, are just a bunch of squeally screamy teenagers wielding flaccid sticks of rhubarb when it comes to getting the job done). I vote for the Greens which, if the PTUA party rankings are anything to go by, have an excellent transport policy.

Yes indeed they do Reuben but they will not win power. So who are you giving your preferences to, because they’re the ones you’re really voting for.

Yeah, and ignoring all those minor parties whose preferences will be redistributed in the blink of an eyelid, have you decided which major party goes above the other?

Labor, at the moment. I have a problem with political parties like the Liberals who side with powerful corporate lobbies like the IPA. But these days, it’s hard to pick the two apart. On transport, I can’t see how they’d be remarkably different. Socially likewise. The two seem fixated on oppressing queers, the rights of the dying (with anti-euthanasia legislation) and allowing our GHG emissions to spiral out of control with the AU$6billion given in subsidies to the coal industry each year (all under the guise of ‘clean coal’).