I hope my kids don’t feel offended when I point out good etiquette to them. I think they probably know it all by now, but sometimes I’ll point it out just to remind them, and sometimes I’ll point it out/affirm their actions a little louder than usual so that others in the vicinity can get the hint — for instance on the escalators at stations: “That’s it boys, stand on the left.” 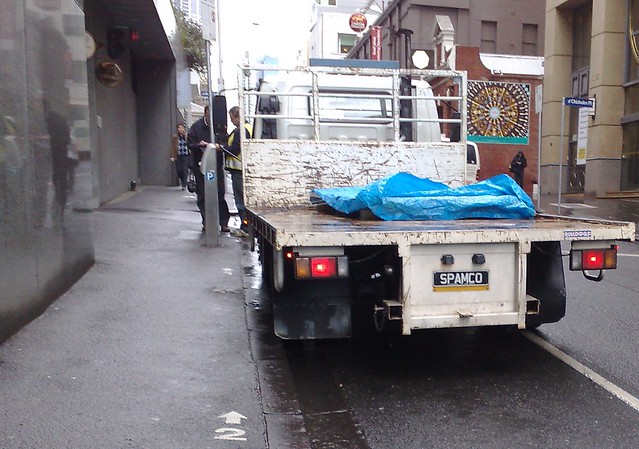 Little Lonsdale Street has busy but narrow footpaths. Something I’ve noticed is that some people haven’t figured out that when walking with someone else, it’s rude to take up the whole footpath when you encounter a person coming the other way.

Generally when faced with this, I’ll just stop dead on the left hand side of the path, rather than acquiesce and step aside onto the road. (Well why should I?) They usually take a hint then and grudgingly fall into single file.

(Not as bad: walking slowly 2+ abreast, filling up a footpath, oblivious of others in a hurry trying to overtake you. Still inconsiderate though.)

Try walking through Degraves Street. So many hipster moron’s who just hang around for no reason taking up space.

Also it amazes me how a very small woman can take up a very wide footpath and walk in such a manner that it’s impossible to get by her without pushing her over. Which I’m sometimes tempted to do.

My big gripe is people who don’t keep to the left, especially on narrow footpaths. And don’t start me on groups who amble along spread across the whole footpath.

But it never ceases to amaze me that people who drive on the left don’t carry this through to walking on the left.

I do the same with my kids; ie remind them quite loudly on what they shoudl do, and often find others around do it too. Always wondered if it was my ‘mum’ voice that made others fall in line – Hah!

Another bug bear along a similar vein, people who have forgotten to say excuse me. I mean, if I’ve noticed you and gotten out of your way, fine, but some just push through. I’ve taken to saying ‘excuse me’ rather loudly, and people move without issue, but I also say it in the hope that others will notice and also use the 2 words that have been forgotten. Seriously, people will move if you say ‘excuse me’ politely and loud enough to be heard, why push!?!?

The kids still don’t use excuse me as well as they should, but I say quite loudly ‘just say excuse me honey and the nice lady/gentleman will let you through’. The nice lady/gent usually hear me and get the idea! :)

Noooo!
Commonsense!
It doesn’t work with those Mummies with prams who insist on pushing all and sundry off the footpath like ninepins.

@Nathan, yep… unfortunately it’s difficult to make a lot of noise coming up behind someone, unlike thumping like a herd of elephants down the escalators when approaching a person incorrectly standing on the right… the noise generally gives them the hint they should get out of the way.

I too insist people walk single file, although I don’t stop but appear to be not looking ahead and I have never collided with anyone. I will step off for an old person loaded with shopping or whatever if they are taking up the width of the path.

People getting into lifts before others have alighted or on to trains, sometimes pushing others aside, before everyone has disembarked is becoming increasingly common.

This annoys me too. If I am trying to get past someone who is walking slowly and taking up the entire sidewalk/footpath some loud footsteps or a “psst” to make my presence known usually does the trick.

I’m not sure about Australia, but where I came from originally we were taught in school to keep to the left hand side of the footpath when you are walking along it. Generally back home people stick to this rule, and its great. I find in Melbourne people walk randomly on any side they please, it’s very irritating. I will adopt some of the techniques you guys have mentioned above.

In the US it’s keep to the right. But other than that good manners is good manners. If I’m in a particularly nasty mood and the person is young and obviously being an ass I’ve been known to “drop a shoulder” and knock them arse over tea kettle. Boy or girl.

I have a name for the amblers, the ones that wander aimlessly, not allowing you past and oblivious to the inconvenience they cause.