When the Hitachi trains were built in the early 70s, it was before the days of dot matrix displays. Destination rolls weren’t easily changed, so they included a few places they thought that might one day get rail services.

Forward planning, much of it in line with the stated rail extensions in the 1969 transport plan.

Here, courtesy of an old railways book I have, is a list of destinations which had been added in anticipation: 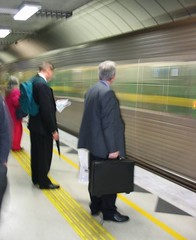 Interesting omissions include Cranbourne (opened 1995) and Warragul (a few suburban trains went out that way during the 90s).

[1] Werribee — was electrified and got suburban trains in 1985. [2] Sunbury — No electric trains yet, but funded and expected to open in 2012. Controversial because some locals would prefer to keep their V/Line trains, though I think the project brings numerous benefits. [3] Deer Park West and Melton — Electrification and duplication from Sunshine to Melton is included as part of the Victorian Transport Plan, but is not currently funded. [4] Craigieburn — Eventually got electric trains in 2007. [5] South Morang — Funded and expected to open in 2013. Controversial because of the astronomical cost, partly explained by the project including lots and lots of other stuff. Interestingly the official government information now appears to be devoid of an expected opening date. [6] Doncaster — Despite bridges on the Eastern Freeway being specifically built to accommodate a train line, it hasn’t eventuated. A big upgrade to bus services, under the name DART (Doncaster Area Rapid Transit) is about to start. [7] Mulgrave — The State Coalition has pledged to do a feasibility study of the line to Rowville (including Mulgrave) if it wins the state election, one of its few policies announced so far. [8] Baxter — Not planned, but the PeninsulaLink plans do include provision for expansion of the existing line underneath part of the freeway under construction. Extending to Leawarra (where Monash’s Peninsula campus is) and Baxter makes sense, if only to move the train stabling and massive car park out of Frankston, which can be redeveloped as part of the multiple CBDs strategy. [9] Mornington — Gone backwards. The station and some of the train line that were there have been demolished/ripped-up… the only indicator left is Railway Grove.

Going back further, here are some that were on the blue (Harris) trains:

The red (Tait) trains appear to have listed only stations which today get suburban trains — or did at the time (St Kilda and Port Melbourne, for instance).

[10] Trains once ran here, though I don’t think they were ever electric trains.

Yep, a disgrace that the railway system hasn’t kept pace with the expanding suburbs. Doncaster and Rowville are two candidates for rail lines.
PS I think Brighton Beach station will celebrate 100 years of electrification (line from Flinder St) in a couple of years time. Not much has changed since!

I’ve noticed the ‘Melton Rail upgrade’, as the government spin doctors have billed it, is another one of these ultra-expensive upgrades at $1.3 billion, considering what would actually be involved, to be done in the ‘medium term’ :
http://www.doi.vic.gov.au/web23/Home.nsf/AllDocs/5D3183ABC05D2A77CA257625001B43BB?OpenDocument

I presume it will involve electrification from Sunshine to Melton and duplication of the track (currently single track past the new Western Freeway overpass) and be done once Regional Rail Link has taken the V/Line traffic off the suburban tracks from Sunsine in (??? … possibly – who knows!!)

Healesville and Warburton … never electrified – were operated by Walker Railcars and rollingstock of that ilk from Lilydale in their later days. Warbuton closed in 1965 and Healesville 1980

Roger: Electrification of Sandringham and Essendon was in May 1919

An article in a recent local paper said that the railway group and the rail trail people are now planning to open a rail trail from Lilydale to Healesville without eliminating the space required to keep the trail line. Their aim is to have a rail service between Lilydale and Healesville eventually (perhaps a tourist/dinner type thing like the Queenscliff railway, but it would be nice to have a commuter shuttle).

Meanwhile the bus operation continues to offer a skeleton service along that line, sticking with the mindset that only rail OR bus can exist.

Silly buggers could have all the funding they wanted if they started allowing advertising – discreetly and carefully chosen, obviously – on both the inside and outside of trains, similar to trams and buses.
They’ve done nothing but dismantle the infrastructure put in place decades ago, check out the 1940 map HERE instead of adding to it.

I think it is more of a sad indictment of us- those guys back in the 70s were forward thinking and built for future needs, and expected future generations to have the common sense to get what needed to be done, done! It seems to me that today we’re desperately trying to play catch up on all infrastructure fronts. It’s a big worry for our growing city!

Well we really need to pressure the Government and Opposition to electrify the Frankston line to Mornington via Langwarrin and Moorooduc. Also extending the Glen Waverly line to Rowville and Extending the Box Hill tram to Doncaster shopping centre.

Phill I think extending the 48 to Doncaster is more on the cards, and the Opposition actually had a POLICY (imagine that!) to extend the 48 to Doncaster, at the last election. They now have a $2M policy for a feasability study on the Rowville train line extension…I find it hard to belive that the Liberals are more committed to ‘sustainable’ transport policy that Labor, but at this stage they’re getting my vote.

I suppose with the Harris train destinations, back then they probably would have actually displayed HEALESVILLE on the front to tell people it was the train connecting with the onward railmotor.

About Frankston, I doubt they’d let the carpark go, the people who live in Frankston/Frankston South/Langwarrin who aren’t convenient to Baxter, and the various people leeching off the train carpark would whinge about it.

am I dreaming or wasn’t the duplication to Melton ripped up as part of the farcerail upgrade to Ballarat ?

@archi, not quite — that was on the Bendigo line, which used to be double all the way from Melbourne to Bendigo, but now has substantial single line sections

Very illuminating. I like the Leawarra/Baxter idea. Somehow I was never aware there was a train of any description running down from Baxter right into Mornington. As someone who now has cause to visit Mornington semi-regularly on an infrequent meandering bus, that railway reservation visible on Google is — like the one trailing off after Epping Station — almost enough to bring a tear to the eye.

Given the amount of new buiding going on around Mornington, a revival seems kinda plausible. Looks like the ‘tourist railway’ folk have even kept some of the old track in working order for us in the interim : )