The ANZ-sponsored free wifi at Southern Cross Station is a nice idea, and would be quite useful… if it worked. 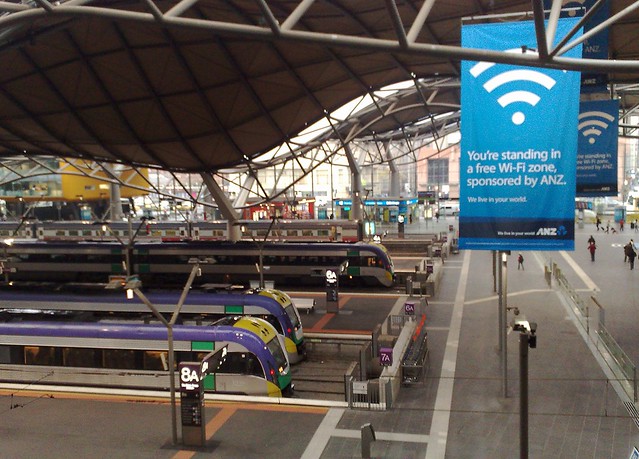 I tried for several minutes one day the other week to get it working, and couldn’t. My mobile could detect both an ANZ Wifi and a “Free public Wifi” network, but neither seemed to actually do anything.

Apparently it runs until the end of September, as well as (for some of this period) some cafes in Melbourne, Sydney, Brisbane, and Sydney Manly ferries.

I also spotted a tram the other day that allegedly has free wifi on board. Who knows if it actually works though.

All banks are the same – useless!

I was using the ANZ Free Wifi on the tram last week. Worked wonders. Better than Optus’s 3G connection at some stages on the route. I know on the iPhone for example, you need to open a browser first to agree to the terms and conditions, then you can load up any other app you need and connect.

On other phones you need to attempt to browse the net, and the wifi will hijack the page and take you to terms&conditions before you can continue browsing.

I agree – useless! An annoying marketing crampaign they run every couple of months

It’s Tram 3537 that’s got the free wifi. I saw it the other day but didn’t get a chance to jump on board. Using Tramtracker it’s possible to see where the tram is at any particular moment, so I might try and stalk it and have a go on board :)

Had “Free Public Wifi” with full internet access all the way from Ripponlea to Richmond on the train today. Often see it, first time it has worked