Wow. That’s not what I expected. A hung parliament. 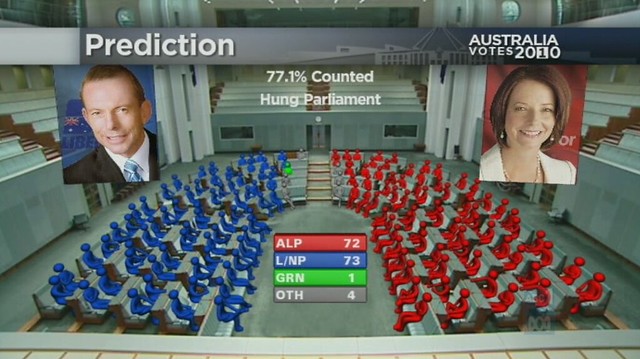 (Love the way the ABC Morph character MPs are in different poses, including some having their legs crossed.)

Who knows what’ll happen now. Just have to wait and see I suppose.

One of my beefs was the lack of a sound GHG emissions reduction plan from Labor over the past term. I’d be hoping the strong Green vote and large number of Greens senators would force whoever forms government to finally take some real action.

It’s only a three months until the Victorian state poll. The major state parties must be wondering how strong the Green vote will be this time round.

Abbott is claiming more people voted for the Coalition than for Labor, so they won the popular vote, and have more of a right to form a government than Labor.

The primary vote figures (as of last night, via the ABC web site):

I think Abbott’s argument would hold a lot more weight if their primary vote had been over 50%. After all, Labor plus the Greens come out at 49.9%, for example, which is well over the Coalition’s 43.2%.

Gillard is claiming the two-party preferred vote was higher for Labor than the Coalition, so they have more of a right to form a government.

Those figures (as of last night, via the Electoral Commission):

Of course ultimately it depends which side can convince enough Independents and Greens to work with them. It probably didn’t help that Warren Truss and Barnaby Joyce from the Nationals both apparently had a go at two of the Independents on television on Saturday night.

Given the three Independents identified so far are all in regional areas, it also sounds like the National Broadband Network will be way more important than one might have thought just a week ago. I’m coming around to the idea of an NBN, as a kind of complete rebuild of the existing copper wire network. Still very expensive of course.

Turns out that until each party has its official campaign launch, us lowly taxpayers foot the bill for their gallivanting around the country:

Additionally, a loophole in Department of Finance policy means the sizeable daily travel allowances for politicians and staffers are paid out of the public purse until the day of the respective political parties’ campaign launch.

Ridiculous. I think it’s time for the rules to change so that the parties themselves start paying as soon as the writs are issued.

Which party will propose it?

And how about other reforms, such as the proposed Parliamentary Budget Office, which might give us a more meaningful campaign next time by avoiding the sniping over costings?

Or a more formal protocol for leaders’ debates during the campaign? 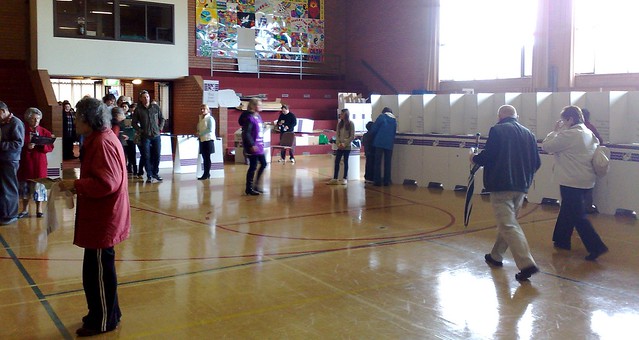 Where we voted, the lines were relatively short and moved quickly. And the sausage sizzle was well-supplied and tasty.

Sadly some voters queued for ages and then couldn’t get a sausage.

16 replies on “The election”

A hung Parliament is exciting though. It’s the first time in 70 years. This is a historical event and you are lucky enough to witness it!

@Roger, No doubt some were scared off by the “great big new tax” cry, but more people swung to the Greens than the Coalition.

Sound as in the adjective. But have inserted “GHG” to clarify.

Gutted that there were no sausages left at my polling booth.

Though I did feel happier when the scary Family First woman with glazed eyes and a plastered grin thanked me for voting and my other half responded “Not for you!”

The ALP’s CPRS would not have worked, just as NEMMCO failed to deliver true competitive benefits to retail electricity users (just huge new bills and an ageing and failing network no one cares to invest in).

This the story of the pig and the chicken. When the chicken says, “let’s have breakfast. I feel like bacon and eggs”, the pig has a lot more skin in the game than the chicken.

Speculators are the chicken. You NEVER do what the chicken wants. You can listen, but only the pigs (the folks who *DO* the work and get rewarded for that work) should get to choose the course of action.

CPRS was designed by chickens (investors and speculators) for chickens. Pigs (us) would lose out. Investors would win in any CPRS scheme as they can speculate on the price of GHGs rather than work to reduce them. It’s not in the investor’s best interests to reduce GHG emissions, only to make them more expensive and buy low (or free) and sell high. Coupled with the multi-billion dollar giveaway to the biggest polluters, the overall reduction would take far longer than just educating folks, and acting on basic pareto principles (80/20 rule).

I think most of us could easily reduce our GHG emissions by 20% or more without changing what we do or how we do it if we knew to “do this, not that” for a small variety of very common choices, such as using cold water for washing clothes, or combining car trips as much as possible, setting the heater to 19 C instead of 22 C, avoiding the purchase of goods in glass containers (unless you can re-use the glass container), and checking and replacing fridge seals when they’re worn.

I really think folks who *can* work at home, *should* be required to work at home. This would eliminate the CBD and inner city as being a huge destination, eliminate wasteful travel, free up roads (requiring less to be built), and make public transport for more friendly for those who must go to their work. However, this would require laws prohibiting insurance agencies and councils discriminating against home work. This is a law that costs nothing to anyone and is the sort of action that is required to move us to a services economy.

GHG (including other gases than CO2) must be reduced. The cost of the burden must be on the polluters. If you choose to have a V8, it MUST be more expensive to run than a 3 cylinder diesel hybrid. If you use dirty brown coal, it MUST be more expensive than buying power from renewable alternatives, or even less dirty alternatives such as gas. But doing that by a CPRS is not going to work as it’s a derivative, and not a direct pricing effect.

I’m glad the Greens got in. I think we’ll end up with a GHG reduction scheme that will actually work without enriching folks who have no skin in the game (or even negative skin).

I worked as an election official at a fairly small and extremely busy polling place on Saturday. We had no sausage sizzle/cake stall or any kind of stall and I missed it! If the people selling sausages etc could find out roughly how many ballot papers were being supplied they’d be better able to organise to have enough sausages available.

I walked past three different polling places on Saturday and not one had a sausage sizzle going. Definitely disappointing. Much more so than any actual voting results….

I had always wondered why the parties’ campaign ‘launches’ were so late in the campaign. Then in an election report on ABC radio someone made the off hand comment that it would cost the coalition at least $10,000 by launching when they did because they would then have to pay for their airfares.

We need campaign funding reform. Disclosure of donations would be a good start (see: http://www.abc.net.au/rn/nationalinterest/stories/2010/2989000.htm).

But I wonder how many trips across the country Julia would have made were she made to pay for them herself – to say nothing of her carbon footprint. It is this sort of dodgy ethics in the behaviour of politicians that makes cynics of voters.

As an aside I can see some of the rationale – the Greens for example can travel as much as the two major parties if their travel is subsidised by the taxpayer. I’m just not sure that makes it right.

Why do all of the graphics hav the Green sitting over with the coalition? It looks ridiculous.

The CPRS is a scam. Whats easier to measure the weight of ? A truck load of coal, or the invisible gas in the air after you have burned it ? The CPRS is all about creating property rights over hot air and giving those rights to powerful foreign criminals.

I personally suspect that trying to charge a tax on emissions might be the wrong way to go about it. Especially at a time of global financial instability. We’d be much better of taking direct action towards the source. i.e. move car trips to public transport of course and investing in more renewable energy. Anyone talking about carbon trading or tax would seem to be creating a distraction from the real issues. Of course they may claim that a tax would fund sustainable investment, though I’d rather do it without increasing cost of living, etc. and I’m sure it can be done.

Andrew – I am now your biggest fan. Where do i sign?

The advantage of a CPRS is that it makes more polluting industries and activities more expensive, which can make lower emission options (such as renewable power generation) more competitive with these currently cheaper but “dirty” options (such as brown coal burning). This then provides a financial incentive for consumers to switch and corporations to invest.

Sorry, meant to say “fixed carbon price over a CPRS”.

As Andrew said above, having market control on the price gets speculators and financiers involved.

Haha, I spent the whole ten hours breathing in the smoke from the sausage sizzle at a large booth and wasn’t even tempted to partake. Had no idea sausages were the sleeper issue of the election!

Enno: “Whats easier to measure the weight of ? A truck load of coal, or the invisible gas in the air after you have burned it ?”

I’d tend to lean against putting a price on carbon, an ETS, cap-n-trade, CPRS, etc. The main reason is that it creates a market for the sake of a market (much like the market for CDOs), and this market can be hijacked by the criminally devious.

It would be much better (for those in the electorate) to be knocking on Adam Bandt’s door and tell him we want to see the end of FBT deductions on salary sacrifice cars, import tarrifs, an end to First Home Owner grants (elaboration below), compulsory bike lanes on every new or reconstructed road, and perhaps bicycle access across the Westgate (more elaboration below).

Elaboration on import tarrifs. This would encourage local manufacturing and cut down on transport (costs & greenhouse gases). The WTO will jump up-n-down, but I think their time is over.

First home money should be abolished because the current scheme encourages shonky builders to build stuff so far away from anywhere sensible, pushes up the price of housing, and increases greenhouse gases not only by transport, but also the need to reconstruct the house because of shonky workmanship (as people in New Zealand and Frankston are now painfully aware).

I should also point out that housing in Australia (and to some degree in New Zealand) is so freaking expensive. It should be perfectly possible to get housing at one-third of current prices … the one-third price is the normal state of affairs in various countries like Malaysia (with very similar standards of construction to Australia).

Bicycle access across the Westgate: I don’t necessarily mean let them cycle over the bridge, but we should explore options such as an adapted bus running a shuttle service across the bridge 24 hours a day, or a mixed approach where the bus can run 18 hours a day and you can cycle yourself across during the graveyard shift. Brisbane City Council already have bike racks on some of their buses.