Nice placement, fellas. Was that part of the plan? 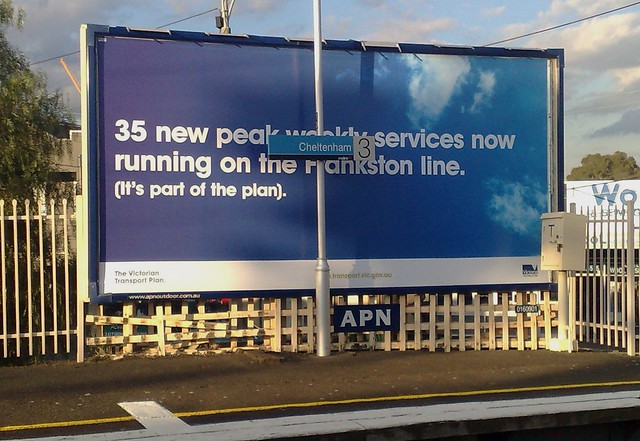 But the real news is that it turns out the new Frankston/Pakenham/Cranbourne timetables introduced in June have had a noticeable effect on punctuality.

Metro figures presented by CEO Andrew Lezala at last week’s PTUA member meeting show that in the first two weeks of the new timetable, morning peak punctuality for the Caulfield group jumped from 65.1% to 78.7%.

Curiously, evening peak punctuality rose only slightly, from 56.5% to 57.9%. I actually expected this to improve more, since in theory it should be a little easier to control the departure times of trains entering the loop (eg at the start of their trips from Flinders Street), which is perhaps the biggest bottleneck on this group of lines. Obviously there must be other factors at work.

Apart from morning punctuality, anecdotally the overcrowding has reduced under the new timetable.

But changes on the Frankston line in particular are still causing controversy, of course.

Regular passenger Julie Davis from Carrum said her journey has been extended by half an hour because she changes at Richmond to catch a city loop train.

“If you wish to catch a loop train you have to endure stopping all stations or rush around like a maniac at Richmond where nothing is synced to cater for Frankston loop passengers,” she said.

Now… it may seem like half-an-hour, but it’s unlikely that it actually is, at least on a consistent basis. I’ve been doing a bit of this myself to/from the Sandringham line this week… It’s perhaps a minute to change platforms, and up to nine minutes to wait for the next express train to Frankston (but an average of 4.5 minutes, all being well). Inbound the wait at Richmond would be much less, generally around 2-3 minutes.

So worst-case scenario (on a good day) would be about 4 minutes inbound and 10 minutes outbound.

I think if I were her, I’d just catch the stopping train and settle down with a good book. It takes 10 minutes longer from Carrum to Richmond, but runs into the loop without changing, and is likely to have plenty of seats inbound (especially for trains that originate at Carrum), and outbound from about Ormond onwards.

Not that anybody likes a longer ride or a change of trains, of course.

But it now seems clear that the change has resulted in more reliable services — at least in morning peak, that is.

The full results are not out yet, but we already know that system-wide for June, Metro missed their target again.

It’ll be interesting to see how the final results look, and the Caulfield lines in particular.

9 replies on “The new timetables”

Perhaps she’s just using government spin in her calculation of the half hour. After all, when they introduce one new train to the day’s timetable on each of four lines, that becomes ’20 new services’. She’s doing the maths for you.

Before the election the Craigieburn Werribee and Sydenham lines will shake up.

Like your recent travel, Daniel, I’m using Sandy line and change at Richmond during morning and afternoon peak times. I only have to wait a few minutes to change trains. Often less than one minute (a quick bolt!).

I can’t help but wonder how they got that billboard up, or at least the middle portion?

Probably one of those one-piece vinyl billboards.

Travelling from Bentleigh, I’ve noticed the Frankston line morning trains have been definitely quieter over the last few weeks… most likely because..
– tertiary students on exams/holiday
– school sudents on holiday
– less passengers because the services are so slow for inner passengers & outer passengers forced to change trains. – back to driving!

The new timetable doesnt improve punctionality – just increases journey times – as my experience has been the same as before… always between 4 & 10 minutes late at Southern Cross, even if the train is on time at Bentleigh.

And, when a train is cancelled, you still cannot always get on the next one. And if you do they still stop at every stop after Caulfield, when there is no way anyone can get on… slowing down even further an already late service.

Metro states that the new timetable makes it easier to recover from disruptions, but the opposite is true.. disruptions get compounded.

Why dont they make the half-empty expresses stop at some of the inner stations & pick-up the hoards waitng for the overcrowed stopping services?

Based on Metro’s current philosophy, they will change the timetable again to add another 10 minutes in journey time, and lose another 10% of passengers (who after all, are a major contributor to the delays) , then at last, they may be able to run on time & avoid the penalties being imposed.

In other news, there is a doco about a campaign to bring back tram conductors on at the festival
http://www.melbournefilmfestival.com.au/films/view?film_id=108969

@Alasdair, fair comment about students on holidays, however overall the Frankston line has more services in peak; that must also make a difference. Will be interesting to see how it goes after holidays end (in the case of most schools, this coming Monday).

I travel from Ormond-Southern Cross daily and I think the new timetable is working. Previously I used to catch the 8.02 or 8.06 (which arrived at 8.06 and 8.10 respectively). Now I aim for the 8.10 most of the time, which, shock! horror! more or less arrives at 8.10! All up a few minutes are added to my trip but let’s be honest, I’m rarely in a hurry to get to work!

Even before the school holidays I thought the crowing had evened out, probably cos the direct to Flinders trains were done away with and now all trains from Ormond go through the loop. So I definitely think it has added consistency.

On the way home, I am also happy as now there are trains through Southern Cross between 5.01 and 5.27, although I rarely leave work that early, but it’s a nice option to have.

And I am also pleased to see new screens at the MCG end of platforms at Richmond for those changing there – they are many years too late for all the Sandringham folk who have been doing the platform swap for years!