I’ve mentioned it before, but Joel Spolsky wrote a great article a few years ago about pricing, and noted that companies would ideally like everybody to pay as much as they are willing to for their products.

In economist jargon, capitalists want to capture the consumer surplus.

Seriously, it’s a great article, and well worth a read, to learn about how pricing is done, even if you’re not particularly interested in economics.

One method for this type of pricing in the USA is for supermarkets and other stores to publish coupons in the newspapers and catalogues. If the time-rich (eg poor) people have the time to go find the coupons and cut them out and remember to take them shopping, they’ll earn an extra discount. Others won’t bother. 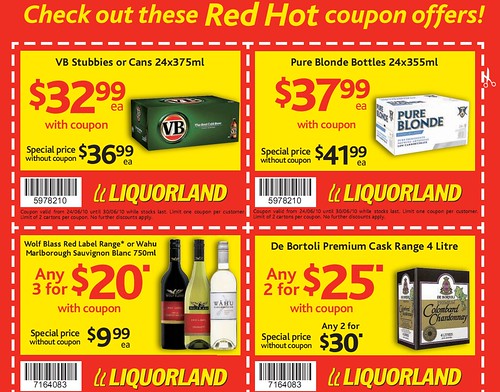 Recently Coles has been trying it here. The catalogue has some coupons with a barcode on it, and if you snip it out and take it along, you got an extra discount.

I wonder if anybody bothers?

I’ve made good use of the 3 bottles of wine for $20 voucher. Normally I’d just go to ACG and get a case of cheap wine…this voucher gave me less cheap wine for cheap!

Given that the opportunity cost of my time is zero, cutting out coupons (or scanning sales catalogues) doesn’t cost anything and can save you. Provided of course that you were going to buy that item or similar anyway.

Coles sounds cheaper compared to Safeway. Coles is getting cheaper than Safeway since BiLo closed.

In the USA these coupon clippers are the bane of supermarket queues. I never used to bother when I was there.
But since the GFC, if I saw them here I would probably bother. No Coles near me, though.

Many people in the US are avid cupon clippers and show up at the store with an envelope stuffed full of them. I seldom bother to look for cupons as they are usually for things that I wouldn’t normally buy or for stores I don’t frequently shop at. To buy something just because you have a cupon and can save some money on the purchace can be a false sense of economy if you wouldn’t normally buy that item or partiular brand without a cupon. Becides being in flyers and newspaper inserts envelopes full of cupons are frequently stuffed into US mailboxes addressed to “current resident”.

I reckon Woolworths use the same principle with their house branding for groceries. Sell daggily packaged Home Brand to the poor people. Repackage it as Select brand for the middle spenders. Then use Select Brand as a lever to buy national brand name stuff at lower prices by screwing suppliers (Select brand has more attractive packaging so is seen as a competitor to big brands whereas Home brand isn’t).

With chocolates the ploy is a bit different. They import lots of foreign chocolate bars that they sell for 69c. This is way cheaper than the Aussie made bars at $1.30 or so. So they screw the name brands on price and do more specials at 99c.

A friend who lives in Las Vegas recently boasted of reducing her shopping bill from ~$330 to ~$170 with the use of coupons. SIXTY coupons. Took forever to process her items, and she was shouted at a few times by people in the queue behind her. While I admire her dedication and the saving, I guess I’m one of the time-poor, cash less-poor people who’d think, “Stuff this, I’ve got better things to do with my time than cut out coupons and stand in a queue for hours”. I do sometimes use the Shop-a-Docket coupons for meals etc, but I don’t even look at Coles catalogues anymore, preferring to make my brand decisions in-store, where I can make cost/quality comparisons.

How many people use the fuel discount voucher? I think these are a real rip off as you will never save more than a $1 or 2 and you may drive out of your way to use it (more fuel wasted).

The shopping vouchers (scanned) from the USA are often shared on the net, printed and used by anyone who can be bothered.

What’s even great is that my local Coles has copies of the catalogue in the store! So, even if you had forgotten the coupons at home (as I have done), just pick up the latest catalogue as you walk into the store and use the coupons on the way out.

That way, at least you’ll have something to read while you weave all the way to the back of the store to get the Milk!

PS. Now that most stores have small fridges for cold drinks near the checkouts, it would be too much to ask them to put the MILK there instead, right?