I did a double-take last night when a Cranbourne train was announced as running “express from Dandenong to Merinda Park”, not just on the automatic announcement, but also on the screen. 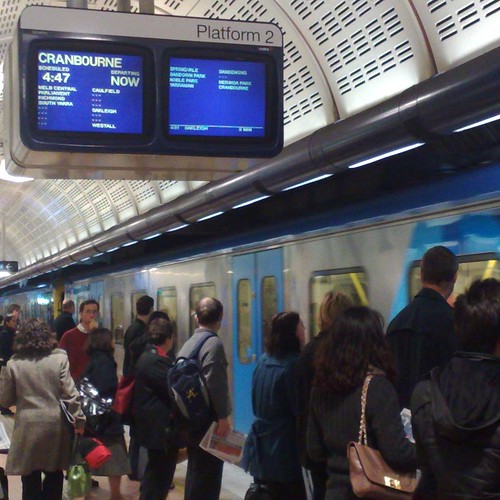 There is no station between Dandenong and Merinda Park.

There eventually will be, at Lynbrook, but construction hasn’t even begun yet. In fact tenders for it close this week (if anybody wants to have a bid).

I’d guess it won’t actually open for a couple of years, so it seems a bit premature to put it into the system, especially as it may cause confusion. I’m assuming it was a stuff-up.

By the way, apparently Cinderella uses the Northern Line 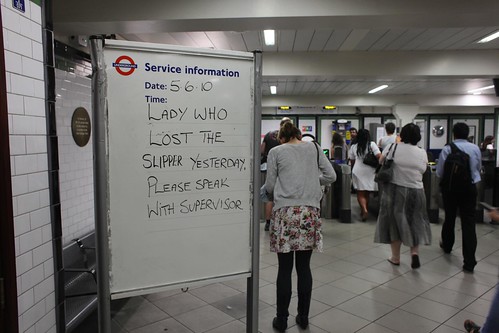 (via the London Underground Tube Diary)

22 replies on “Cinderella and the ghost station”

Kind of reminds me of the old destination roller thingos on the pre-refurb Comeng and Hitachi trains and their ‘optimism’ of the future train network – Leawarra, Baxter, Coldstream, Melton, Deer Park West, Sunbury, South Morang, etc (the latter two now to be reality of course)

So these aren’t technical stops?

When I lived in the US, when travelling between NYC and BWI, there were technical stops and they had names. They weren’t on time tables though.

Coldstream would have been a stop at some stage wouldn’t it? It’s on the way to Yarra Glen, which was closed in 1980 I believe. So those Hitachis may have been preparing for the eventual electrification of the Healesville line. Obviously that would have been lunacy – those people out there all have cars, you see – so instead of electrification, closure was chosen.

Yep, Coldstream station is on Google Maps. It would be very logical to build it and re-open the line. At least a hundred cars would no longer need to travel from that area to Lilydale station each day.

The Coldstream extension was listed in the 1969 transportation plan. The Healesville line closed in 1980 with Coldstream (some freight ran to Coldstream until the early 90’s) included and that was the end of that.

Some housing very slowly creeping out beyond Lilydale in recent years, but I haven’t seen anything much around Coldstream of late. The trestle bridges at Yarra Glen succumb to the Black Saturday bushfires (there were falling down anyway from what Ii’d seen)

The bridges were in need of repair and five of them were burnt down in the fires. The railway line is also up and down like nobody’s business so it would need a thorough overhaul and some bridge construction to get it happening, but I’ve never seen a state government interested in public transport so it will probably not happen unless I become Premier. Certainly not when they like to pretend it costs $650 million to re-open a line between Epping and South Morang.

It might not be so bad if the bus service wasn’t so hopeless!

@Philip, is there really enough of a population at Coldstream? Re-building a railway line and opening a station for 100 people (less than a single carriage-load) does not sound like wise use of money to me. It does appear to be in the Urban Growth Boundary, but is it gaining in population like Lynhurst, Mernda or Caroline Springs?

The $562m for South Morang has been appallingly badly communicated. It’s actually a multi-pronged upgrade of both the Epping and Hurstbridge lines.

Express from Oakleigh to Westall? That’s a peculiar stopping pattern, what happened to the consistency of the new timetable?

Trains really seem to love phantom expressing past Dandneong. When it was actually open they were express from Dandenong to Hallam (or all except GMH) for all but about 4 trains per day. Then for about 3 years after they closed the station at General Motors they still kept announcing that they were expressing it, but if you checked the timetable there was no longer a single service scheduled to actually stop there.

maybe the train will stop for a couple of minutes at Lynbrook so people can see what the place looks like before a station is built. Give them one last look?

Roger, it often does – single track from Dandenong to Cranbourne with a passing loop at Lynbrook where one train slows or stops to wait for the other.

@Phillip, if you stopped making up names for things, it would be easier to understand what you are talking about. There cannot have been an announcement at Campbellfield Station because no such place exists.

Ditto your previous reference to Meadow Heights station. It is called Coolaroo, and is in Coolaroo.

@ Daniel, Lynbrook isn’t the first station to be added prematurely. All Ballarat trains have been expressing Deer Park West station for ages, presumably since the PRIDE system came in.

@ Phillip, there is no Campbellfield station!?

That has to be the most embarrassing announcement ever. I don’t think the Lady would even want to come back to retrieve the slipper.

1) What do you think about the locations of the “new” stations in the growth areas in caroline springs and lynbrook? It appears to me that the caroline spring station is in a less than idea position. Chosen to suit the train line which was created decades ago, rather than the realities of what the Caroline Springs estate has become. Do you think train lines should be re-routed in these instances? I’m saying this, because it’s still not too late to save any plans for stations going to growth areas like point cook or truganina/tarneit.

1. Lynbrook is probably okay. You’re right that Caroline Springs isn’t ideally located, but you’d hope there is residential development scheduled to happen around the new station (as at Williams Landing).

If I ran the world, I’d be putting in a TrainLink-style bus to go with it as soon as the station opens. After all, even if the line *was* diverted into Caroline Springs, only a certain proportion of residents would be within walking distance, and car parks can only ever cater for a minority of station users, because they’re very expensive and occupy a lot of land.

2. But the new displays at Richmond/Nth Melb/FSS/Southern Cross offer hardly any information not already available in the Loop stations, so I’m not sure just switching to new screens is of great benefit.

You’re right — the rest of the premium stations are in need of something better. Many have no visual displays at all, and those that do show only a couple of lines of info, with no clue as to the times or destinations of following trains.

Speaking of the new displays,

1. How come only some platforms at Richmond have shelter and displays the entire length of the platform? As a Frankston line traveler it annoys me when I get off the front carriage and have to walk back to the middle of the platform to see a display screen. And what about when it’s raining? Glad I rarely use Richmond (especially now timetables have changed)

2. The new displays at Southern Cross have very small text. Plus at the Collins St entrance, they have been moved from above the ticket booth (in your direct line of sight as you enter the station) to off to the side so you have to walk in to the station and over to them to see what they say. Same for the main entrance, if yuo have entered the station via the food court, there are no displays to be seen as you go through the turnstiles (I know there are some at the bottom of the escalators). It would make so much more sense if as at most other city stations, you can see the screens as you scan your ticket so you can decide which platform to go to. Rather than go the platform and then see if it’s the one you want. It’s obviously rarely an issue for regular travelers but it would make life easier for infrequent travelers and then maybe they’d use the system more.
End rant.

@Liz, Richmond 7+8 are the only ones with long shelters because historically, they were the main ones where people changed trains, as the Direct and Loop trains come in on either side of the same platform.

With more people changing trains there now, it probably makes sense to extend the shelters, and look at whether it’s possible to expand the central subway.

At one stage they tried to put displays showing next Direct/Loop train at the MCG end of each platform, but they were very unreliable. That’s probably something else they should work on again, so one doesn’t have to rely on the announcements.

Hey have you noticed the VLINE PID’a have that line of dots indicating a missing station between Melton and Bacchus Marsh. I think it’s for that future identity “PARWON LOOP’ what ever that is ! (thankyou Melways).