Smartbus is a fancy marketing name for buses that run more frequently than most other routes, have some bus priority and realtime electronic signs at major stops. The figures in this government press release show the upgrades of routes to Smartbus result in strong patronage growth. 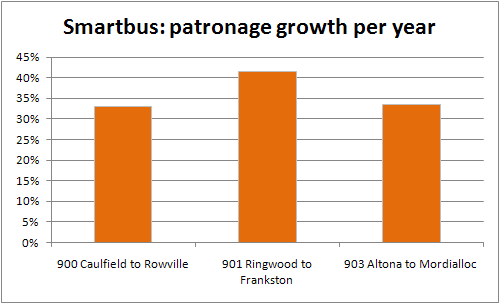 I’ve excluded the older 703 and 888/889 services from the graph. They were part of the initial Smartbus trial, upgraded in 2002, and growth was initially strong, but has flattened out. These routes don’t actually conform to the Smartbus standards, so run less frequently than the newer routes listed above. 888/889 is getting a boost on Monday when it becomes the 902, with a new timetable, and an extension to Airport West. There’s no word on whether the 703 will be fixed.

The figures above show that if you make bus services more frequent, and run them for longer hours, then more people will use them. The jury’s probably out on all the electronic gizmos; many of the signs are periodically unreliable, though admittedly they do work much of the time.

The aims of clever electronics to give buses traffic light priority has never seemed to work as well as promised, and has given way to lower-tech old-fashioned priority bus lanes and jump-start lanes at intersections (where the bus gets a B signal before the rest of the cars, so it can jump to the start of the traffic queue.)

Weekend (and evening) services are a bit poor, with typical waiting times of 30 minutes being totally uncompetitive with car travel, and a long way from parity with inner-suburban tram services running every 12-15 minutes.

And there’s some uncertainty over whether stringing together shorter routes into mega-long services has been a good idea. The expanded 902 from Chelsea to Airport West will be 76 kilometres long, which must play havoc with timekeeping. And few people would catch it from end-to-end, given there are faster, more direct services.

I tend to think of it as not one big long mega-route, but a whole bunch of smaller feeder routes strung together. A lot of people use them just to reach the local station or shopping centre. 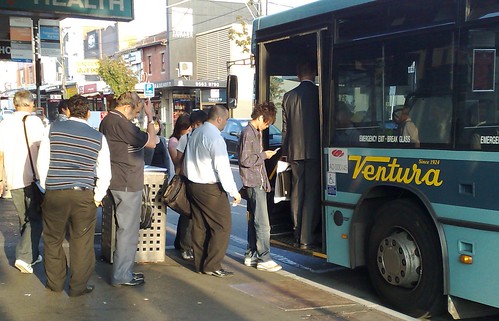 But faults aside, it’s undeniable that they are a success story. So why aren’t there more of them?

They’re not particularly expensive to implement. The next extension, the “Yellow” route 901 from Ringwood to Melbourne Airport (about 70 kilometres), will cost $37.9 million in capital funding, and about $19 million per year in running costs. [Source: Budget papers] This is tiny compared to the amounts being spent freeway expansion — Peninsula Link is costing $759 million for 27 kilometres.

Apart from that and the “DART” Smartbus-style services proposed for Doncaster (luckily not planned for Frankston), there aren’t any more on the drawing board. In fact one proposed route, the “blue” orbital, was cancelled, and part of the 902, from Werribee via Deer Park to Airport West, has been indefinitely deferred.

Surely if the government were serious about offering decent PT to the whole city, they’d have more Smartbuses planned. Give every suburb either a train, tram or Smartbus service, boost the services to run frequently seven-days-a-week, and give every suburb a public transport that is actually in some way competitive to car travel.

7 replies on “Why aren’t there more Smartbuses?”

Having grown up in the Eltham area, the DART service is long overdue, and sounds promising if it actually gets implemented. Here’s hoping it’s not just window-dressing in n election year.

All bus routes should be replaced with Smartbus routes. I hate using the buses because they are useless. They are still road vehicles. No one wants buses. They want Train or Tram. I love using the Train and Tram. I also hate taxis.

Personally, I’d like to see regular bus services upgraded to 6ph 0600-2200hrs and 3ph outside of that, regardless of the day of the week. Then “smartbus” could mean a service of double those figures.

I agree – buses are a lowsy 3rd behind trams/trains, but they’re are a necessity… Improving many more routes to Smartbus standard should be the *bare minimum* any govt should be aiming for in suburbs without rail.

Yeah, longer term they should be aiming for a grid of Smartbus-style routes on every main road that doesn’t have trams. (See the PTUA’s Every 10 Minutes To Everywhere campaign.)

Mikeys, note the 902 will go through Eltham from Monday.

They need to model the Smart Bus routes on the ‘BUZ’ routes in Brisbane which operate to a simply quoted service standard:

The idea of dropping off to 30 minute frequencies kills the concept a bit in Melbourne though, which is shame because people do use them at night if the frequency and activity points en-route are there. I caught the an inbound 444 at around 9pm from Indooroopilly, and there was a boarding queue longer than the bus itself,I was shocked at how busy it was! I guess the ‘student pub’ travel market is an important one to serve….

I’ve just come back for Sri Lanka and sad to say their level of bus service leaves (Smartbus or otherwise) ours for dead!! … Although the buses themselves and the bus stands aren’t too flash admittedly!!

As the country is VERY relient on buses for transport there are red government SLTB buses and private buses (usually white with various decorations) running similar routes more or less in competition with one another. Fares are kept low, even by local standards, and services are very frequent. Furthermore they stay on main roads and avoid that other annoyance of meandering around back streets like they do in Melbourneand stopping every 150m or so it seems!

As a result they are very full – passed one on my way to the airport with people standing in the aisle and sitting on peoples’ laps who’d managed to get a seat!!

I rode a few there and when I was there two years back – fortunately the signs from the civil war were removed informing passengers in Sinhalese to look under and behind the seats for the possibility of a bomb on board!! Yes several have fallen victim to bomb attacks over the years.