Well, it’s the only main street in the Hoddle Grid which has absolutely no scheduled public transport running along it.

So you might think, given the rhetoric is to help people get onto PT, especially for trips into the CBD, that they’d avoid giving private vehicles along King Street priority at intersections — especially since Wurundjeri Way and Citylink are available as city bypass routes.

King Street is the only main street in the CBD that gets 2/3 of the signal cycle time at most intersections — 60 out of 90 seconds, which means pedestrians get less time to cross it, and trams and buses along intersecting streets have to wait. In the case of the trams, they stop despite the lack of any tram stops there. 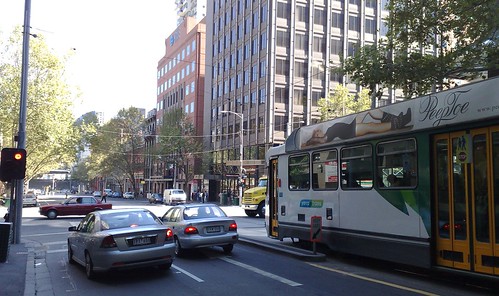 King Street is about the only main street in the CBD that gets green arrows for right-turning traffic, even in the middle of the day. (At least one Exhibition Street intersection gets them in peak hour, but certainly not at lunch time.)

King Street and Bourke Street is one of the only CBD intersections where turning cars don’t have to do hook turns to stay out of the way of the trams. At least, that’s how it works in practice. It’s uncertain quite what was intended, because although the correct arrow markings are on the street for hook turns, no signs are displayed, so motorists ignore the arrows. So it’s not uncommon to see trams having to gong their bells because of cars blocking them, and also cars zooming off narrowly avoiding pedestrians when they see a gap in the traffic. 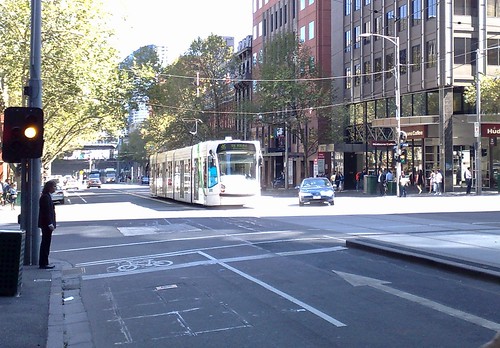 All this makes King Street an anachronism. It belongs to the 60s car-domination thinking which is long gone. It probably doesn’t need PT services serving it (given blanket coverage of surrounding streets), but it sure as hell shouldn’t have the road traffic priority that it does.

I thought the special thing about King St was the number of “gentlemen’s clubs” that line it, and Lindsay Tanner’s office is right next to one of them ;) But the timing of the lights makes it good if you walk to/from work from somewhere to the north of the CBD – you’re never stuck waiting for long to cross an east/west street.

I think King Street is managed by VicRoads as part of the arterial road network (as I also think Spencer Street is), so this may account for the differences in its operation to other CBD streets.

Dave, sure, but my point is (whoever’s managing it) the policy is wrong. (I haven’t checked the traffic lights at Flinders St/King St, but I have a feeling they may not show the bias to King St traffic the others do.)

And I simply don’t understand why hook turns are not in place at Bourke/King. I didn’t check Collins/King, but from Google Streetview it looks like eastbound right turns are banned, and westbound the road surface arrows are in place and (at least when the Google Streetview car went past) vehicles were making hook turns, though I can’t see any signs up.

Heh, just look at the ad on the tram in the first picture.

Ahem. Daniel, so you were spending so much time in King St, just to do a public transport analysis. Yeah, we believe you! Where a bloke visits after work is his business, I guess!!

King Street is the way it is as a result of the move to “ban” cars from Swanston Street. And now that you can’t get from Kings Way to Montague Street, it’s probably the best of a bad bunch to get from the inner Southern suburbs to the CBD or the inner Northern suburbs by car. Better staying on Kings Way as opposed to clogging up South Melbourne.

We can argue about the need for cars to travel into and through the CBD, and it is something that really needs to be addressed, but the fact is that if the demand for north-south traffic is there, King Street is the best street for it. It’s represented in this new “Smartroads” concept, it’s the only street in the whole grid that doesn’t have a priority use attributed to it (at least north-south).

When I catch the bus from the airport to Frankston, it usually runs along King Street

How about we assign the proportion of who pays most for its maintenance to who gets priority. (which will turn out, surprise, to be private transport)

@mike: b/s – everyone pays for roads through tax. Your registration and fuel excise don’t even come close to paying for the additional wear your car causes on the road. By your logic, pedestrians and cyclists should get priority, because they’re still paying tax, but barely causing any additional wear.