Metro Trains boss Andrew Lezala remarked on Tuesday at the Parliamentary Select Committee on Train Services that he hoped to see rail patronage double by 2020.

“Our overall plan is to double patronage on the railway during the life of the franchise, which requires a major increase in the system’s capacity.” 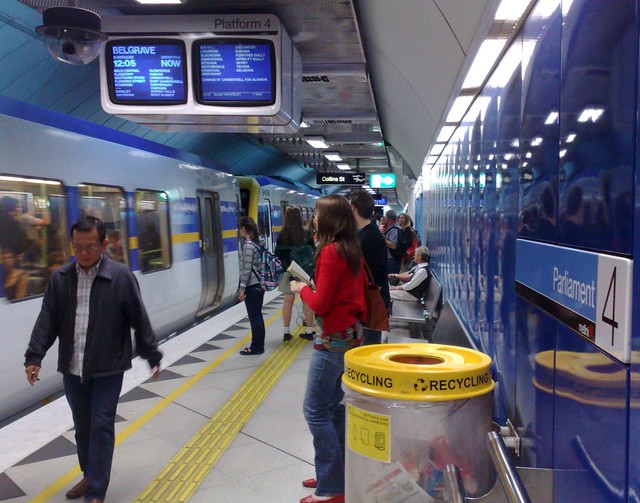 It does not mean piling double the number of people into trains at peak hour, going into the CBD.

Travel into the CBD at peak hour is already dominated by public transport. It’s just the last hold-out rev-heads who fight their way through traffic to their employer-paid $16+ per day parking spots, as well as those whose lack of access to decent PT dictates that they drive. (They might change their minds if they get a train to Doncaster, for instance.) 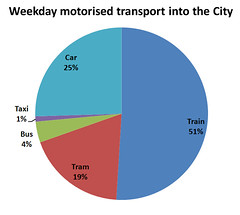 About half of all people come in by train now, so if every single one of those extra people was also coming by train in peak hour (unlikely), that’s at most a 40% increase in peak train passenger numbers — a long way from the 100% growth Metro is aiming for.

Other groups such as visitors will increase too, but they are less likely to be travelling in peak hour.

By far the biggest potential growth market (and Lezala realises this) is in off-peak travel: daytime, weekend, evening, and to destinations other than the city centre. Plenty of people are moving around Melbourne outside peak times, but because train (and other PT) services are pretty poor, most of them are moving by road — in fact some roads are now clogged seven days-a-week.

It’s all about providing more frequent services right across the week, which not only grows patronage at a time when there are heaps of spare trains and spare track capacity, it also helps spread the peak load.

And of course you also need frequent supporting bus/tram feeder services so people can get to the trains all day, given the car parks fill up by 8am, and so many people live beyond walking distance to stations, or are going to places not served by trains. 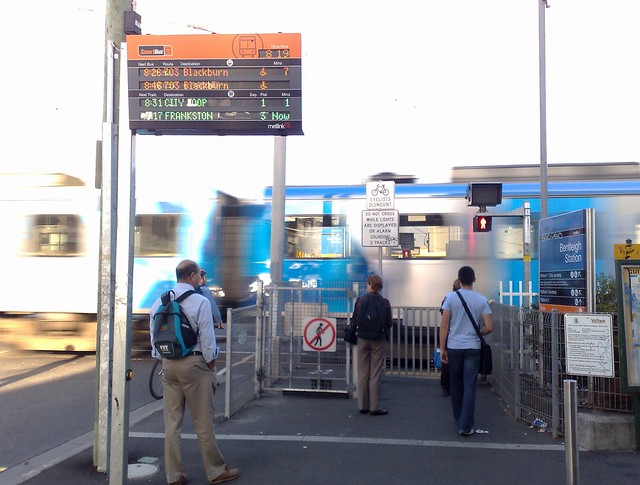 Timetabling in the peak

Secondly, he made the point that the timetables need a shake-up. One of the reasons peak hour trains are so packed (and conversely some have plenty of space) is we’re running a mid-90s train timetable with lots of bolt-ons added over the years. The extra services added have been slotted in wherever they could fit, and so the stopping patterns are all over the place, and the frequencies are uneven on many lines.

Take for example the times of AM peak hour trains leaving Carnegie, one of the busiest suburban stations on the Dandenong line:

They have different origin points, and serve different stations before getting to Carnegie, but in many cases they trail each other through the same stations.

So you can see what he’s getting at when Lezala says the timetables need simplifying, with more regular stopping patterns and frequencies.

And yes, I suspect some zone 1 stations will lose their odd occasional express services: at my station Bentleigh I’m betting the 8:06 and 8:17 Bent-Caul-S.Yarra expresses may well disappear.

But if it means more services overall, with more even frequencies (none of the 16 minute gaps you sometimes see now), I think that more than makes up for it.

Interesting as usual- thanks for the observations and fact.
I’m guessing that most people who travel off-peak do not want to go into the city. As the train system is designed for suburb to city travel, it would be difficult to lift non-peak train patronage. People will use their car as it’s usually more practical.
Given that rail patronage jumped enormously in (about) 2007-08 (without adequate explanation), it could also jump again at some stage over the next ten years.
Oh well. I’ll do my bit and keep catching the early bird train !

The Herald-Sun report on this said that “express services from the outer suburbs could be dumped”, which seems far more dramatic than what you’re saying here.

Is that just plainly incorrect? I couldn’t imagine anyone wanting to undertake peak hour travel from places like Lilydale or Belgrave to the city without there being express trains to speed up the journey. It’s bad enough that they don’t have expresses out of peak hour or on weekends.

I can confirm that the 7:06 Carnegie train has just about all the seats taken, whereas the 7:10 has about 50% of the seats empty. And I only know this because I got sick of the 7:26 being chock full!

Paul, watch for Andrew Lezala’s testimony transcript to be posted here in the next few days. But yeah, it’s been overstated.

Where the infrastructure exists to run expresses (eg third and fourth tracks, and turnbacks like are being built at Laverton and Westall) you might as well keep them. So you’ll still see expresses from Belgrave, Lilydale, Frankston, Dandenong, Werribee etc — in fact the contracts specifically say a two-tier timetable is to be developed, eg outer-suburbs expresses + inner-suburbs stoppers.

What I think you will see is places like Bentleigh and Surrey Hills losing their expresses, as that type of variation in patterns is what they’ll be trying to eliminate, in order to get more trains running, and more reliably.

Keat, thanks, I suspected as much!

I’m on the Craigieburn line and get on in Kensington and there is nothing more frustrating that getting two trains in a row that are so packed that you cannot get on them, and then watch an express go past 50% full. More sensible timetables could only help.

Metro will not able to cope with the double of patronage.

I think we are ready to have the 4 car double-deck Millenium Trains from EDI rail.

Phillip, the whole post is based around explaining how they can cope if they’re smart about it. Please discuss why you disagree.

I suppose they mean they’d get rid of the expresses on sections that only see a couple a day, like the two (?) Glen Waverley line ones each way.

One good one is the 9:17am Belgrave train which skips half of the stations all the way right to the end of the line!

@Phillip: never forget the saga of 4D. The Millennium Train is too wide, tall and long for Melbourne, has no driver’s mirrors and requires longer dwell time than the single-deck fleet. I doubt an adaptation for Melbourne would be successful.

Dumping express trains from the outer suburbs is a serious mistake (but the morons in Sydney actually did this to Padstow).

If this really did come from Andrew Lezala, then we have to convince him otherwise, as follows:

The number of passengers able to be carried in a time period is approximately
P = C * T * (P / (Tf + Tb))
where
P is the period of time (eg 120 minutes – for a 2hr peak)
Tf is the peak direction (forward) travel time
Tb is the counter-peak (back) travel time [assumption: empty]
so … (P / (Tf + Tb)) is the number of full trips the train can make
T is the number of trains servicing the catchment under consideration
C is the average utilisation (capacity) of a train (about 1000?)

If you dump outer-suburban expresses, then Tf will increase dramatically. You might get a slight increase in C (because you’re stopping at more stations), but the net effect is a reduction in P – the number of passengers that can be carried.

If you expect more people to use trains off peak, they need to go to more useful places. Like shopping malls. Also it needs to be easier to take a train across Melbourne past the CBD and out the other side. Currently this is inconvenient on many routes.

“It’s just the last hold-out rev-heads who fight their way through traffic to their employer-paid $16+ per day parking spots, as well as those whose lack of access to decent PT dictates that they drive.”

Don’t forget the people who run the PT system…

Daniel Bowen. I think Metro will cope with the doubling of patronage 50-50. I said they could not cope because I saw how connex did not cope so I had the same feeling.

Vas The Man. I said that we are ready for the Millennium trains because they have plenty of space. Good seats and people would not be able to force the doors. They are 4 carriage and the stations carriage limit is six carriage. We wont have to connect 2 Millennium trains. They are made in Sydney. I saw a story that the 4d train had a failure 10 years after it came from Sydney and it was withdrawn in 2002 and scrapped in 2006. It was made from United Group Rail. They only went on the Lilydale and Belgrave lines. The reason why the 4d train came was that it was a test to see if Melbourne can have double-deck trains. I thought that we might be ready for those trains because it was made from a different company. I understand now. Thanx Vas.

16 minute intervals? Sounds like heaven to those beyond Ringwood.

Is that a sarcastic comment “allan D”? If you look at the peak hour timetable you’d be amazed how many services there are as far as Morooolbark and Upper Ferntree Gully stations, about 7 per hour in peak for each branch.

The people using the Upfield line would be jealous if they knew!