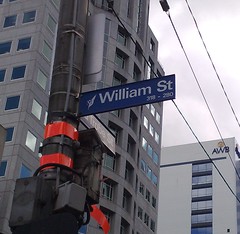 In the legal precinct (William Street between Little Bourke and Latrobe Streets, for non-Melburnians), there are three distinct groups of people that strike me as common, but whom you don’t see much of in other areas of the CBD:

1. Young men looking uncomfortable in shirts and ties (and sometimes suits) — eg defendants and witnesses… there are women and older men too of course, but they don’t stick out as much. Most of them seem to smoke (at least, most of those standing on the street), and the tattoo count seems to be above that of the general population.

2. TV crews hanging about the entrance keeping a lookout for some of those defendants, especially in front of the Magistrate’s Court.

3. People in capes and funny wigs (various legal eagles), who in this neck of the woods, don’t raise an eyebrow.

I often see pairs of police officers, more often than not clutching a folder full of papers. Especially outside the Magistrates Court. A group of people you’ll NEVER see in this vicinity are jay-walkers! Particularly against the lights at the corner of Lonsdale and William.

What about the law types with huge boxes full of documents, you know ‘paralegal’ types hauling around stuff!

Would it be fair to say there are more suits around that end on town than anywhere else in the CBD?

If only there were some way all those boxes of documents could be stored and transferred more easily. Imagine if someone invented a way to turn documents into electricity somehow! Then they could travel by wires!

Daniel
spot on! Regarding Type #1, it would appear that the criminal elements are over-represented in particular demographic or socio-economic groups.
Good observations!

You have perfectly described the section of Corporation Street, Birmingham, between Newton Street and Steelhouse Lane!