Having moved offices to Latrobe Street, I wanted to know where the nearest ATM is — that is, those of my preferred (no fee) banks, St George or Westpac.

The St George ATM/Branch locator will only show five results — including Westpac ATMs. 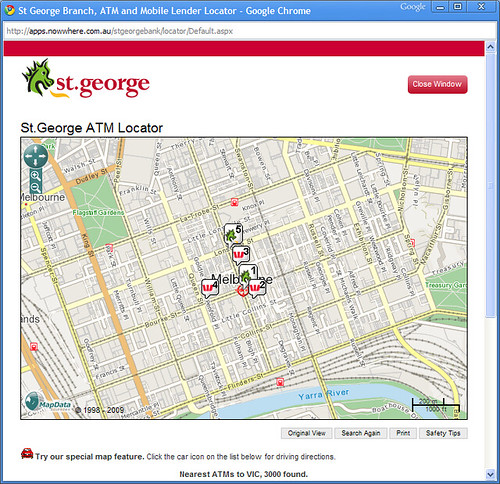 Searching postcode 3000, it shows me those closest to the the corner of Bourke and Elizabeth Streets, none of which are west of Queen Street. I know of at least one ATM on William Street near Bourke Street, but even when dragging the map around, it won’t show any others.

I’ve sent some feedback to the St George people. Will be interested to see how/if/when they fix it.

Update lunchtime: The Commonwealth Bank locator has similar issues if you just enter a postcode, only showing the 5 closest. But it does have the option of entering a full address, but if you don’t spell La Trobe with a space, it (and others) assume it’s Little Latrobe Street, thus showing me ATMs several blocks away instead.

The ANZ one shows about 15, none nearby. If you search by street name, like Commonwealth, you have to put the space in La Trobe, otherwise it has real problems.

The NAB one seems to show all results, but in pages of 5 per page, and with no combined map, which is hopelessly unuseable. (Imagine that, in 2010!) It allows me to enter a full address, but it has the same problems with La Trobe as the Commonwealth does.

4 replies on “Finding an ATM”

Yes, the St George locator seems a bit buggy. Try other postcodes – entering 3006 reveals the one on cnr of Williams and Little Collins, and a couple of others in that area, which you might find useful. I tried 3053 and 3051 for Calrton and Nth Melb, but the results didn’t seem very helpful.

I bank with Westpac and I usually have little trouble locating a Westpac ATM when I need one. One thing I have noticed that I like very much is that in Australia oftentimes several ATMs from various banks will be located together in places like shopping centers allowing people to use their own bank’s ATM to avoid fees. I have not seen this in the US and there is usually just 1 bank’s ATMs available in a shopping center or other location. Quite often it is not one owned by your bank meaning a fee will be applied by the ATM and likely also by your own bank if you use it.

By the way Westpac cardholders can withdraw cash from any Bank of America ATM in the US and vise versa with no fees applied by either bank.

Daniel
how about attempting to locate an ATM that accepts deposits over the net. Good luck!