It seems my secret identity has been revealed… 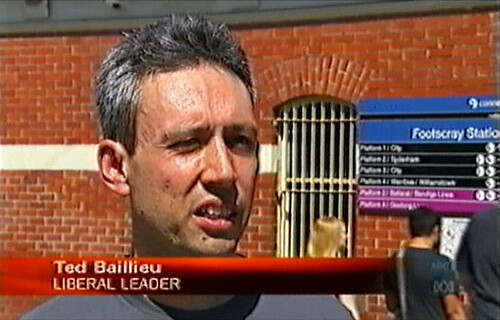 Do you get the money that goes with the identity?

Have your police ready to man the stations after dark, Mr Baillieu? …

I wonder if Daniel looks as good in speedos. You haven’t lived till you’ve seen Bailleau doing pushups in his budgie smugglers.

I told the missus you’d like that blooper. What a ridiculous promise to say that all railway stations would be policed after dark. pffft. Politicians should be made to sign a pledge that if certain promises were not honoured, they would resign. This would have seen an early demise of Mr Howard IMO.

Peter, if that was the case, there’d be NO politicians standing!!! Honestly, when has a politician kept ALL of his promises!? And I say that as a huge Howard admirer, knowing he too didn’t keep all his promises! What I care about is accountability- whether the people get what they demand of their representatives! Half the time I feel both major parties fail to do this- as a predominately Liberal voter, at the moment, I’m more disappointed with them, as I expect them to be a proper opposition, not Labor-lite!! I want a decent alternative, as I’m sure most swing voters want!! A great analogy I heard the other day- if you had a choice of buying an Armani suit, and an Armani knock-off, for the same price, which would you get?

If anyone has followed what has been happening in the US in the last few months, there has been a huge grass roots movement, known as the ‘Tea Party’ movement, which has demanded greater accountability from representatives- especially because of reckless government spending! This movement has demanded accountability from both Democrat and Republican parties! On the 12th September this year, they had a huge, peaceful march on Washington for just this purpose! I often think this would be a great idea here!

Daniel, as the head of the PTUA, I’d like to know your opinion on who you think has the better PT policy. With all the problems that exist today, do you feel the present government has done enough, or do you feel the opposition may have a better plan? I know it is a year until the state election, and policies may not be formulated, but do you think it may be time for a change?

After all, you are “Ted Baillieu, Liberal Leader”- maybe you should vote for yourself!! Ahhh, now it makes sense, this was the plan all along- plant a phony opposition leader, in order to make Brumby complacent leading up to the next election, and just as all appears won- you, the real opposition leader comes out and stuns everyone with brilliance and awe, and take the election in a huge landslide!! Wow, brilliant I might add! Too bad the ABC leaked the plan!!!!!

Andrew V, apart from yesterday’s announcement, the Opposition essentially doesn’t have an announced policy yet. There’s nothing to compare the current government to.

And ergo my frustration with the Liberal Party- you would think that they’d have come up with something, at least unofficially by now, if they were serious about trying to win next years state election!!!!!!

Not really related, but both mornings this week, while on the train passing over Glenhuntly Rd, I thought there was a car alarm going off. Today I twigged that this was the new railway bells, which sound nothing like bells. Don’t you think it’s confusing not to have consistent sounds over the rail network? Especially when they sound like car alarms…

Liz, it wasnt a pedestiran crossing? You’ll find some similar sounding ones have been installed on various pedestrian gates around the place. Tooronga station has some car alarm style sounding gates on a pedestrian crossing separate from the road crossing.

I thought I heard it too, Liz, but didn’t realise it wasn’t a car alarm. They have been upgrading the Glenhuntly ped/railway crossing, so it’s quite possible. I’ll be there tomorrow and will check it out then.

A chance to get some policies from the opposition !!!

(but I really thought you’d stand for the Greens :-)