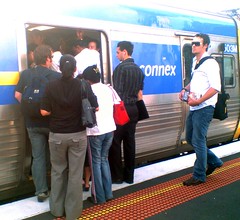 From time to time I’ll rant on Twitter about the FKN (Frankston — it’s an official code) line being stuffed.

After a few months of pretty good performance right around the rail network, the past week has seen a marked decline. Pulling together info from Connex’s Twitter feed and SMS alerts, and excluding a medical emergency or two:

Something every weekday. Other lines have also suffered, everything from cancelled trains to some less-busy lines repeatedly running short trains, to line suspensions.

Remember, the impact from any little incident has big flow-on effects. A single cancelled train can disrupt a thousand people directly, and thousands more in the following trains. A line suspension disrupting a dozen trains is about the equivalent of shutting down a 3-lane freeway for an hour.

So what’s going on? Dunno. But here’s hoping they lift their game pronto. I’d rather a smooth service than a paltry free Daily ticket at the end of the month.

As I write this the FKN line is still suspended south of Cheltenham due to power problems, and some people are stuck on trains in the affected section. I’m heading in for work late today, and fortunately I’m north of that point. Still, it should be an interesting ride in.

(The car is periodically showing a warning light and being a little sluggish too. Maybe the transport gods are angry this week.)

PS. The ride in was pretty smooth. The 10:06am train was on time and not crowded. Either things are back to normal, or everyone’s still stuck south of Cheltenham!

And here’s a good quote from Boris Johnson, Mayor of London, on the importance of reliable train services: “Every time your train is stuck inexplicably in a tunnel, every time a service is cancelled, the experience is not just eroding your quality of life. It is eating away at our city’s global competitiveness.”

8 replies on “The FKN line is stuffed again”

And the rail replacement bus service had huge delays to start with this morning. I waited nearly two hours at Seaford before a bus arrived.

I think medical emergencies should be included. Of course it isn’t Connex’s fault that someone becomes ill, although sardine like conditions can make people sick, it is how Connex deal with a medical emergency and minimise the impact upon the train system.

Ah, no biggie, who wants to go to FKN Frankston!? Yeah, I couldn’t resist THAT one, as a Dandy boy!!
By the way Daniel, with Connex about to lose the contract, do you think they could even be bothered now in providing decent service, given they never bothered from day one? Mind you, I feel the State Government has the greater culpability, using Connex as a scapegoat! I wonder if they’ll use the next mob in the same way? Like to hear your thoughts!

I saw something on the Bigpond news page that would be sure to cause a train delay. It was a chilling video of a baby in a stroller/pram rolling off of the platform and landing upside down into the path of an arriving train at I think Ashburton station. Did you see it too?? The 6 month old boy and the stroller were pushed some distance down the tracks but the baby survived with only a bump on his head. I guess he is alive because he was strapped in. It amazes me that that he and the stroller were not just crushed beneath the train. The video was from a security camera above the platform.

FKN defenetly looks like an acronym for a frequently heard profanity.

If it all gets too much you can just do this…
http://englishrussia.com/?p=2367

Or maybe not as the trains are too low in Australia, except in the city loop.

Andrew, while Connex are still the operator, they’re still subject to the performance penalties, so it’s not like they’re going to let the whole thing fall apart.

Jed, it seems that footage has been shown worldwide. Truly one lucky baby. One can only feel for what the train driver must have gone through – it’s harrowing enough just watching the footage.

Ahh… The FKN acronym is perfect! Luckily I drove in on Friday…